Amid regional warnings of Turkey's growing role in West Africa, including Guinea-Bissau, Egyptian President Abdel Fattah al-Sisi received a call from Umaro Sissoco Embalo, president of Guinea-Bissau, to discuss ways to develop cooperation in the economic and security fields. 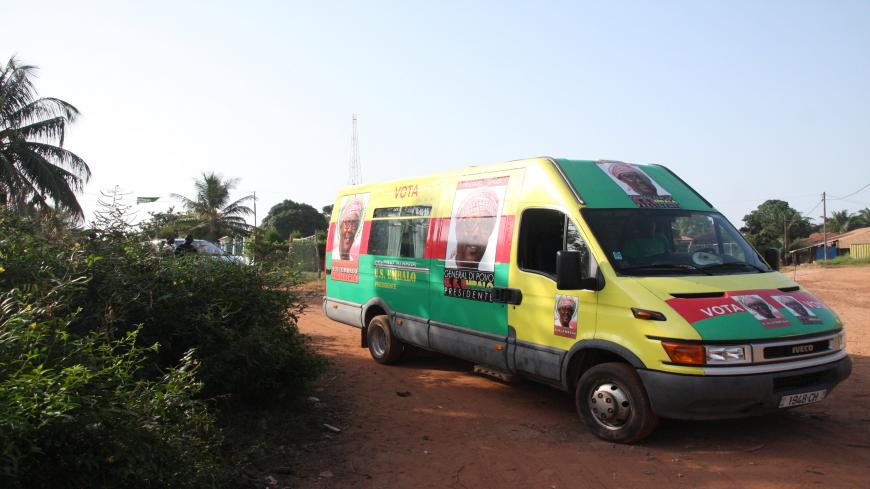 A convoy of the opposition presidential candidate, Umaro Sissoco Embalo, during the election campaign, is ready to leave Bissau for the interior of the country, Guinea-Bissau, Nov. 7, 2019. - -/AFP via Getty Images

Despite the fact that Egyptian President Abdel Fattah al-Sisi's one-year term as head of the African Union ended in 2020, Cairo's cooperation with African countries is growing as a fundemental pillar of Egypt's foreign policy. On March 4, Sisi received Guinea-Bissau President Umaro Sissoco Embalo in Ittihadia Helioplis Palace, where they discussed economic, military and security cooperation.

On Feb. 20, Sisi received a call from Embalo, who stressed his country's keenness to strengthen bilateral relations in various fields. According to an Egyptian presidency's statement, the two presidents agreed to work on improving trade exchange and developing the capabilities of Guinea-Bissau cadres to lay the foundations of state institutions and face the security challenges in the region.

A few days before that phone call, on Feb. 17, Egypt's ambassador to Conakry Tamer al-Meligy met with Embalo to express Egypt's keenness to transfer its expertise to African countries, including Guinea-Bissau, with the ultimate aim to achieve high growth rates across the continent, improve living conditions and promote prosperity.

Prior to this meeting, Embaló visited Istanbul Jan. 30, where he held a closed-door meeting with Turkish President Recep Tayyip Erdogan. Turkish and international newspapers did not reveal any details about the agenda of the meeting. Yet several Turkish newspapers considered it a sign of rapprochement between Turkey and West African countries, led by Guinea-Bissau.

Rashad Abdo, head of the Economic Research Forum, told Al-Monitor that in recent years, Egypt opened up to major economic countries after Sisi attended the G-7 summit in 2019, and the G-20 summits in 2017 and 2019, noting that Cairo succeeded in developing strong partnerships with prominent entities such as the International Monetary Fund, the World Bank and the European Bank for Reconstruction and Development.

He said that Egypt's openness to those countries and prominent entities can attract international investments and aid to Africa in general, and Guinea-Bissau in particular, to finance the latter's needs in the fight against the coronavirus pandemic and its needs in investments to develop infrastructure.

Alone, he explained, Turkey cannot develop the infrastructure in those countries, nor will it be able to attract the investments of major economic powers to African countries, like Egypt does, given the tension between Turkey and several of those economic powers, namely France, which also has a strong influence in West Africa.

Abdo said that Egypt’s leadership for the African efforts to establish an African Continental Free Trade Area— which will offer opportunities for Guinea-Bissau to increase exports to other African countries — paves the way for Egyptian influence to outweigh the Turkish influence in Conakry.

Noha Nofal, director of Regional Trade Agreements at the Ministry of Trade and Industry, announced in an official statement Feb. 23 that 54 out of 55 African countries, including Egypt and Guinea-Bissau, have signed the African Continental Free Trade Area, which will soon enter into force after it was delayed in July 2020 due to the coronavirus outbreak.

Fajr Abdul Fattah, a retired professor of international econom from the Institute of African Studies, told Al-Monitor that Guinea-Bissau represents a promising market for Egyptian products and that the Egyptian authorities should pay attention to it. The Sisi administration realizes the importance of the African continent, regardless of any competition between Egyptian and Turkish influence, especially since Turkey's influence there will likely be minimal compared to the influence of some European countries such as France, which has the largest economic influence in West Africa, he explained.

Abdul Fattah said that although there are about 381 million people in West African countries — which make up 31% of the 1.216 billion total population of Africa — Egypt's exports to these countries do not exceed 7% of its total exports for the entire continent, as Nofal said in her statements, which means that “these countries, including Guinea-Bissau, represent an opportunity that has not yet been exploited by Egypt.”

Zakaria Othman, a former researcher at the Arab and African Research Center, told Al-Monitor that the most important aspect of the talks between Embalo and Sisi was the need to transfer Egyptian expertise to Guinea-Bissau cadres to face security challenges, in light of Egypt’s interest in fighting terrorism before it regains ground in Arab and African countries, as happened in Syria, Iraq and Nigeria.

Othman noted that Guinea-Bissau, through its Atlantic coasts, might play a prominent role in cutting off the supply lines of terrorist organizations such as al-Qaeda and Boko Haram in West and Central Africa, and it could also prevent the infiltration of terrorists across its borders to Senegal, from which Boko Haram operatives move to Mauritania and Mali to form the most dangerous potential terrorist hotspots at the moment.

The authorities of Guinea-Bissau thwarted many smuggling operations that were carried out for the benefit of al-Qaeda, most notably in 2019, when the authorities seized nearly 2 tons of cocaine before they moved from the coasts of Guinea-Bissau to the coasts of North Africa. The Guinean intelligence said at the time that the drugs shipment was coming from Colombia to be sold and distributed to al-Qaeda in North Africa and West Africa.

Meanwhile, in his March 2 statement, Saudi Arabia's minister of state for African Affairs Ahmed Kattan accused Turkey of using rapprochement with African countries to support terrorist organizations there in a way that serves its interests and the interests of Iran.