The Islamic State in Africa

The Islamic State presence in the depth of the African continent was strengthened after Nigerian movement Boko Haram pledged allegiance to the terrorist group. 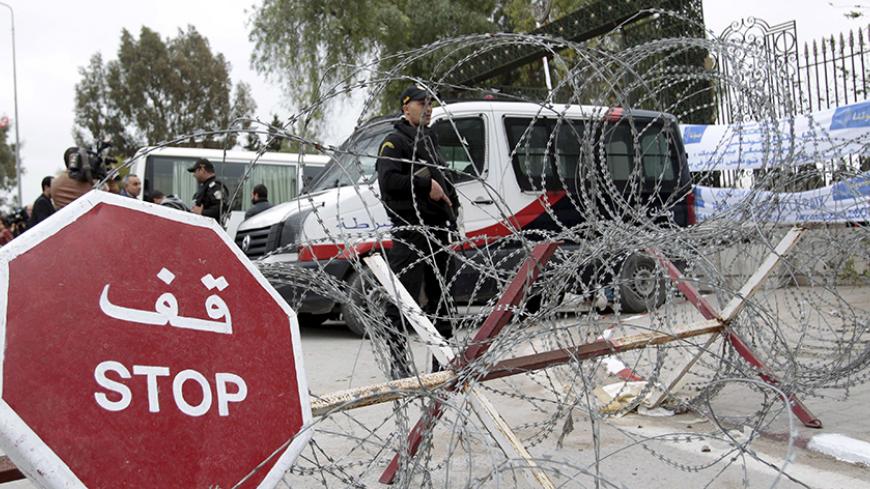 A police officer stands guard in front of the Bardo Museum in Tunis, March 24, 2015. The national museum symbolically reopened Tuesday, almost a week after a militant attack that killed 20 foreign visitors. - REUTERS/Zoubeir Souissi

CAIRO — The March 18 terrorist attack in Tunisia on Bardo Museum that resulted in the death of 20 tourists and the March 7 broadcast of a video on social media sites showing the Nigerian movement Boko Haram pledging allegiance to the Islamic State (IS) show the expansion of IS into the African continent. Up until this point, IS' presence in Africa seemed confined to North Africa in Libya’s coastal cities, Egypt’s Sinai and some places in Algeria.

The latest indicators of IS’ expansion pose a new threat to the entire African continent. The expansion in Africa is favorable for the group due to poverty, political conflict, continual sectarian tension and the illegal spread of weapons. This supports IS’ ambitions to extend the so-called caliphate from the Levant to the land of Egypt, the land of Abyssinia (Ethiopia) and to the Maghreb, according to a map of the caliphate published by the group on its social media sites.

Boko Haram is a jihadist group founded in 2002. It claims to follow the teachings of Islam and it controls areas in northern Nigeria. The group’s official name is “The people of the Sunnis for Preaching and Jihad,” but in January 2002, it called itself Boko Haram, meaning “preventing Western education” or “Western education is haram” (forbidden). The group launches attacks across the Nigerian border into Cameroon and Niger in its quest to establish what it calls the “Islamic emirate” on the area of Chad Lake, bordering Nigeria, Chad, Cameroon and Niger. The African Summit held in January 2015 in Addis Ababa had decided to form a regional power in which Nigeria, Cameroon, Niger, Benin and Chad would participate in order to confront this group.

The timing of Boko Haram's pledge of allegiance did not come as a surprise for analysts and politicians. It was rather expected after Boko Haram recently began to adopt IS’ approach in its raids on villages such as stoning, slaughter and burning. In addition, Boko Haram’s leader, Abu Bakr Chico, said in February 2015, in a video that was published on the Internet, that the kidnapping and hostage-taking operations comply with the text of the Quran, which is often repeated by IS’ leader, Abu Bakr al-Baghdadi. Not to mention that during its latest operations — mainly in Bosso in Niger in February, during which 100 people were killed — Boko Haram raised IS flags.

Yusri al-Azbawi, a political expert in foreign relations at al-Ahram Center for Political and Strategic Studies, told Al-Monitor that there are a number of dysfunctional states in Africa that would be easy prey for IS’ expansion in the upcoming stage after Nigeria, Cameroon and Mali, in which Boko Haram already exists. Somalia is the first, due to the ethnic and religious divisions and since the government’s authority is very weak. There is also Algeria: “Despite the security oppression in Algeria, there are some operations that indicate the emergence of extremist Islamic movements,” he said.

He pointed out that there are also Somalia’s neighboring countries, such as Djibouti and Sudan, where suppression and oppression, poverty and lack of development prevail. Thus, central and northern Africa might become the new headquarters for IS networks, which were joined by several jihadist movements that move easily between states without being tracked by the security services since there is no security coordination between these countries to confront them.

“The future of African cooperation in confronting the threat posed by IS depends on several factors. First, Egypt’s success against the Muslim Brotherhood and its ability to face IS in Libya and finally being able to form an alliance to counter terrorism in Africa. The second factor is related to extending the international coalition’s operations against IS from Iraq and Syria to include African countries such as Mali, northern Nigeria and Cameroon and assist these countries in confronting terrorism since these groups pose a threat to international security,” Azbawi added.

He spoke of a catastrophic scenario represented by these countries’ inability to face IS. Thus, the group would expand into the depths of the African countries and take advantage of a suitable environment for the formation of a jihadi republic, an IS republic or an Islamic caliphate.

Maj. Gen. Rida Yaacoub, a security expert and founder of the International Center for Counter-Terrorism (ICCT), told Al-Monitor that IS is currently present in a number of countries in central and west Africa, in areas in which Boko Haram was stationed, in addition to North Africa, in Libya, Algeria and Egypt.

Yaacoub called on the African Union to act quickly and adopt the African Alliance, which Egyptian President Abdel Fattah al-Sisi had called for in February 2015, in order to confront terrorism. He warned about Boko Haram’s ability, if merged with IS, in realizing the dream of the mother organization, IS, to extend the so-called caliphate to enter Ethiopia and the headwaters of the Nile, according to the map published by IS, which included Egypt.

According to Yaacoub, IS is seeking to implement its plan through specific tools such as Ansar Bayt al-Maqdis, which seeks to control Egypt. It would use Boko Haram to control the depths of African and the headwaters of the Nile under its plan, which also includes moving to Europe in the context of establishing the so-called emirate in Andalusia.

The fact that terrorist movements in the African continent, such as the Movement for Unity and Jihad in West Africa (MUJWA), al-Shabaab in Somalia, Ansar Bayt al-Maqdis in Egypt and al-Qaeda — which is spread in many countries and claims to be the sole Islamic reference — are pledging allegiance to the IS leader, warns about a dark scenario represented in IS’ ability to create strong areas of influence and occupy vital and vast geographic areas in Africa.

This strengthens [IS’] power in facing the US-led international coalition — which includes 22 countries — that is trying to eliminate it in Syria and Iraq, especially considering Africa’s natural resources, which requires an urgent international action before IS’ influence extends into the depth of the African continent.