During the hot TV season of Ramadan, Egyptian state TV will air several series vilifying the Muslim Brotherhood while glorifying army and police operations against the group. 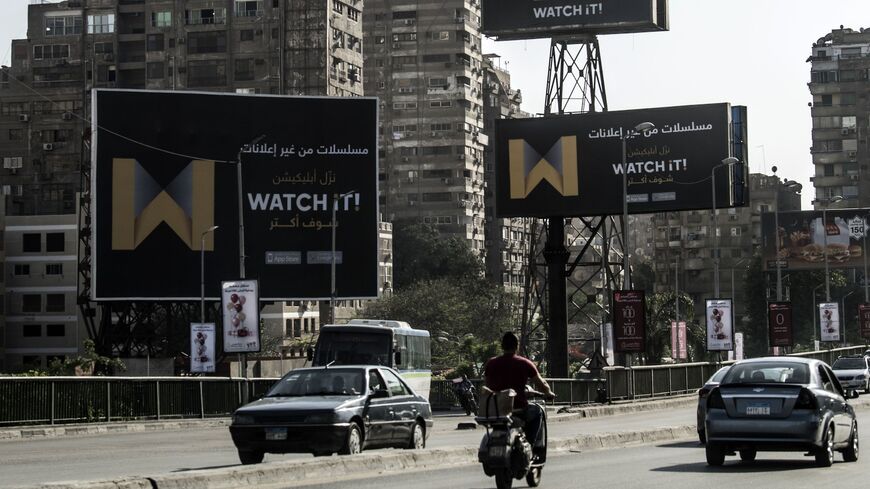 A picture taken on May 7, 2019, shows billboards advertising Watch iT, Egypt's first video-streaming app, in the capital Cairo. - KHALED DESOUKI/AFP via Getty Images

Egyptian TV series to air during Ramadan, when TV programming is most heavily watched, are expected to express and reinforce the state’s position on the Muslim Brotherhood this year.

The Ramadan drama season, kicking off next April, will feature multiple series that take on extremism and terrorism by the Muslim Brotherhood and the army and police operations against Brotherhood members, all produced by production company United Media Services.

In 2019, Reuters reported that United Media Services appeared to have been set up by the government. Reuters cited a dozen industry and government sources as sharing that "two of the company’s four board members have links to Egyptian General Intelligence, and one of the company’s units was previously headed by the intelligence chief.”

Reuters also quoted prominent film director Khaled Youssef, a former parliamentarian, as saying that the government is “interfering in the content of drama” and had marginalized private production firms to control the industry.

One of this year’s most prominent Ramadan series depicting security clashes between the state and the Muslim Brotherhood is the second season of a series called “Al-Eghtyar” (Arabic for “The choice”). Season two is titled, “So that we do not forget.”

The series tells the stories of the Egyptian security forces killed in the security operations and clashes with the Muslim Brotherhood following the ouster of President Mohammed Morsi from 2013 to 2020.

Director Peter Mimi said in a press statement Jan. 7, “The series is a patriotic and national project to raise awareness for future generations. It includes scenes from the actual protests against the Muslim Brotherhood that took place during this period."

The first season of "Al-Eghtyar" recounts the life of Col. Ahmed al-Mansi, the commander of the Egyptian army’s 103rd Thunderbolt Battalion (a special forces unit) who was killed in a 2017 terror attack in the Egyptian city of Rafah. It also tells a parallel story of the jihadist Hisham Ashmawy, who was sentenced to death by hanging for committing armed acts of violence against the army and the police.

In October 2020, Egyptian President Abdel Fattah al-Sisi honored the cast of "Al-Eghtyar" at the Armed Forces' 32nd Cultural Symposium. Sisi said that the series “gave a wonderful and credible picture of a reality we witness and will continue to live.” He called for the production of several series on “the heroic acts of the army and police.”

Another series set to air this Ramadan is “Cairo-Kabul.” It addresses terror schemes and tells the story of a national security officer. United Media Services chairman Tamer Mursi commented on the series on Facebook March 5, saying “Cairo-Kabul" is "a new dramatic attempt to understand extremism, raise awareness on the danger of terrorism and expose it. Egyptian drama is becoming more technically and artistically developed, and United Media Services is fighting a public relations battle and exposing terrorist schemes in Egypt and the region.”

"Hagma Mortada" (Arabic for “Rebel Attack”), also expected to air during Ramadan, highlights the activities of Egyptian intelligence. Screenwriter Baher Dewidar said in a March 4 press statement, “The series is the first dramatic project on Egyptian intelligence files in contemporary times. It aims to convey the message that the battle is fundamentally a battle of consciousness.”

Since Morsi's ouster, United Media Services has been producing ambitious films that portray heroic acts by the Egyptian army. The latest, “Al Serb” (Arabic for “The Squadron”), was released in February.

The movie documents an airstrike by the Egyptian air force against the Libyan city of Derna following the Islamic State's beheading of Copts in Libya in 2015. It also operations against suspected terrorists and Muslim Brotherhood members hiding in Libya.

In 2019, the movie “Al-Mamar” (Arabic for “The Passage”), produced by Al Masa Art Production Company, was screened as part of the commemoration of the 6th of October (Yom Kippur) War. The company said, "The film is a massive production in Egyptian cinema, with a staggering budget of approximately 100 million Egyptian pounds ($6.35 million). The Egyptian army was its largest financier."

Al-Mal newspaper revealed that the army contributed to the production of the film, reducing costs by providing weapons, equipment and other needs. Sisi also praised Al-Mamar’s cast.

He added, “The success of ‘The Choice’ last year encouraged United Media Services to produce more series that tackle extremism and expose the Brotherhood. For these artistic works to be effective, they must not be simple propaganda. However, they must have elements of artistic license to … succeed in conveying the message to citizens.”

Shennawi called on the state to make the upcoming Ramadan series that expose the Muslim Brotherhood available in foreign languages. “This will allow these series to be aired abroad and to inform Western countries about the war that the Egyptian army is waging against terrorism.”

Art critic Magda Morris told Al-Monitor, “Through this patriotic content that exposes the Muslim Brotherhood and glorifies the heroic acts of the army and the police, the state aims to raise the morale of Egyptian soldiers as they engage in security operations against the Brotherhood.”

She added, “The state has realized that it needs the weapon of art and drama alongside security and military measures to fight terrorists and the Muslim Brotherhood. This will convince the Egyptians that the army and police are up against the terrorist Muslim Brotherhood organization and not the opposition.”