The New York City mayoral candidate has made headlines for his opposition to the boycott, divestment and sanctions movement, which opposes Israel's policies toward the Palestinians with a variety of boycotts. 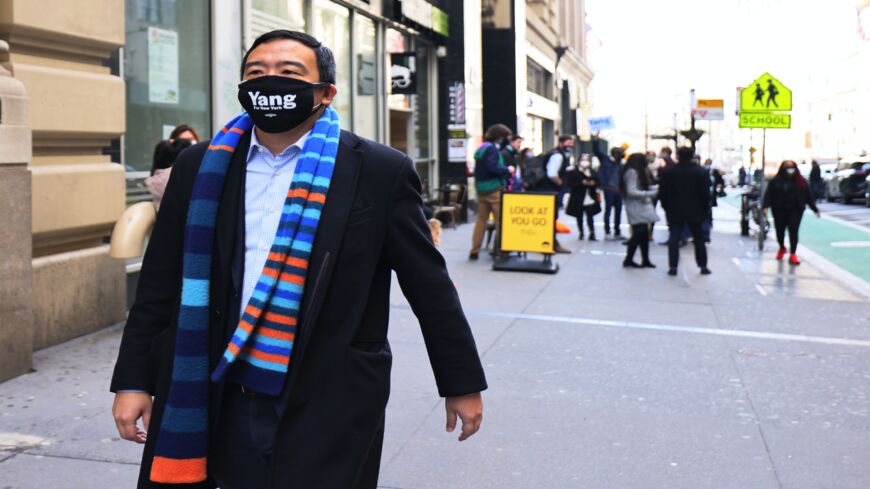 Yang said the movement, which supports a variety of boycotts of Israel over its treatment of the Palestinians, goes beyond reasonable criticism of the Israeli government.

“BDS specifically as an organization, as a movement has refused to disavow extremist elements that have essentially said Israel does not have a right to exist,” said Yang on the progressive show Secular Talk. “So that’s quite extreme."

The BDS movement says it supports pressuring Israel to end the occupation of the West Bank and Gaza and allowing Palestinian refugees from the 1948 Arab-Israeli war to return to Israel. To this end, BDS supports “withdrawing support from Israel’s apartheid regime,” which it describes as “complicit Israeli sporting, cultural and academic institutions.” BDS also urges banks, universities and other entities to withdraw investments from the state of Israel. It additionally calls for suspending Israel from international forums, including United Nations bodies, according to the Palestinian BDS National Committee.

Supporters of BDS say it is a nonviolent protest movement in support of Palestinian rights. Critics say BDS is anti-Semitic and singles out Israel as a whole for criticism and delegitimization. BDS draws much of its support from Europe and the United States.

Yang, who also ran for president in 2020, has criticized the movement while running for New York City mayor. He elaborated on his positions during Friday’s interview. Yang said he does not see an issue with general criticism of Israel and Prime Minister Benjamin Netanyahu but that BDS goes beyond this with its boycotts.

“I do not see criticism of Israel as fundamentally anti-Semitic,” said Yang. “I think BDS is a very different thing than, let’s say, criticism of the Netanyahu administration or even some of Israel’s policies.”

Yang also called economic ties between Israel and New York City “very significant,” and said his position on the Israeli-Palestinian conflict is that there should be a two-state solution.

“I’m on the record as supporting a two-state solution, which I think is a fairly mainstream perspective,” he said.

Boycotting Israel is increasingly becoming a domestic politics issue in the United States. Support for Israel is still strong in Congress, though the number of pro-Palestinian lawmakers, including some who support BDS, is increasing. The BDS issue is especially present in New York, where Gov. Andrew Cuomo ordered state institutions to divest funds from BDS-affiliated organizations.