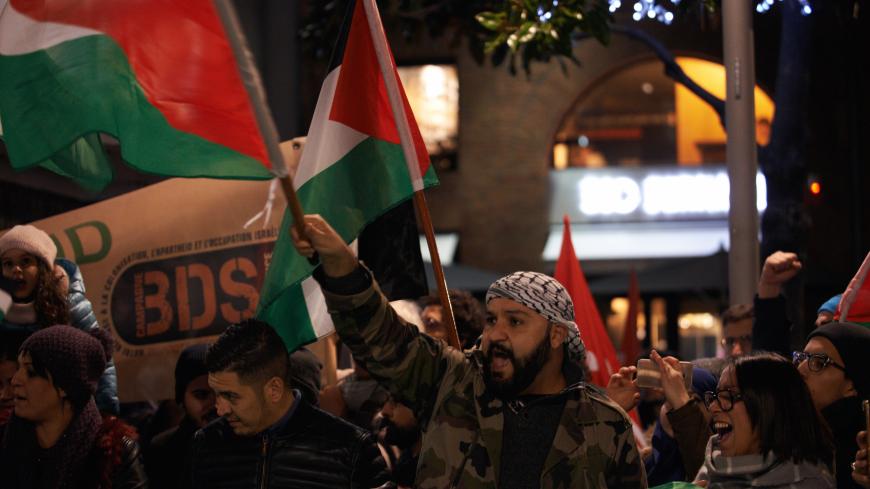 A boycott, divestment and sanctions (BDS) banner is visible as a protester shouts slogans in Toulouse, France, after US President Donald Trump's recognition of Jerusalem as Israel's capital, Dec. 12, 2017.

The page, titled “Joe Biden and the Jewish community,” vows that the presumptive Democratic nominee will “firmly reject the BDS movement, which singles out Israel — home to millions of Jews — and too often veers into anti-Semitism, while letting Palestinians off the hook for their choices.”

While much of the page details Biden’s plan to combat the rapid rise of anti-Semitism within the United States, a significant portion of it also details the candidate’s Israel policy.

Why it matters: While only two US lawmakers actually support BDS, the movement has nonetheless become a heated issue on Capitol Hill in recent years. The American Israel Public Affairs Committee (AIPAC) and other pro-Israel groups have lobbied Congress to pass several bills cracking down on BDS, many Democrats have raised objections to the legislation over constitutional free speech concerns. Biden’s website does not detail his position on the anti-BDS legislation.

The site also notes that Biden would “urge Arab states to move beyond quiet talks and take bolder steps toward normalization with Israel” and “further expand scientific collaborations with the close US ally. It also reiterates his pledges to maintain existing military aid to Israel while restoring Palestinian economic aid so long as it remains subject to existing restrictions within US law.

What’s next: The Senate included one anti-BDS bill, the Combating BDS Act, as part of a Middle East legislative package it passed 77-23 last year. The Democratic-controlled House has not advanced the legislation or any other anti-BDS bill.