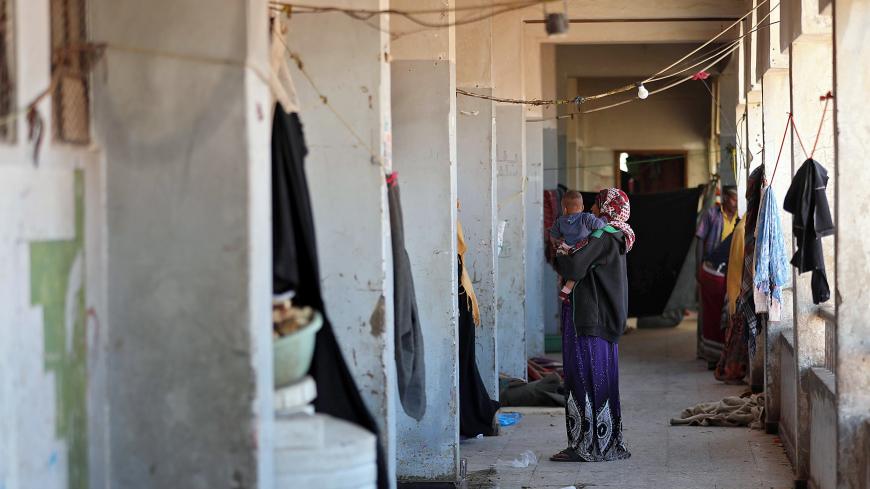 A woman carries her child inside a school building for displaced Yemenis who fled fighting between Houthi rebels and the Saudi-backed government forces, in the town of al-Turba in Taiz governorate on Feb. 4, 2021. Taiz has long been an area of conflict in Yemen's war. - AHMAD AL-BASHA/AFP via Getty Images

The United Nations has sanctioned a Houthi official in Yemen for alleged human rights abuses against women.

The UN Security Council designated Sultan Saleh Aida Aida Zabin on Thursday. Zabin is the director of the Criminal Investigation Department in the Yemeni capital, Sanaa. He was sanctioned for alleged crimes against women, the council said in a press release.

“He has played a prominent role in a policy of intimidation and use of systematic arrest, detention, torture, sexual violence and rape against politically active women,” said the council.

Women have been forcibly disappeared, raped, tortured and denied medical treatment at sites Zabin is responsible for and he has administered torture himself on some occasions, according to the release.

Zabin’s department is part of the Houthi administration in Yemen. The Gulf state has been experiencing a brutal civil war since 2014. The Iran-backed Houthi forces control Sanaa and other parts of the west. The UN-recognized government of President Abed Rabbo Mansour Hadi controls most of the rest of the country. The Hadi-led government is backed by a Saudi-led coalition.

Zabin was sanctioned under the terms of UN Security Council Resolution 2140, passed in 2014. This measure imposes a travel ban and asset freeze on sanctioned individuals or entities for one year. The resolution was passed specifically for anyone who supports “acts that threaten the peace, security and stability of Yemen.”

Both sides of the Yemeni conflict have been criticized by observers for numerous human rights violations, including arbitrary detention and torture.