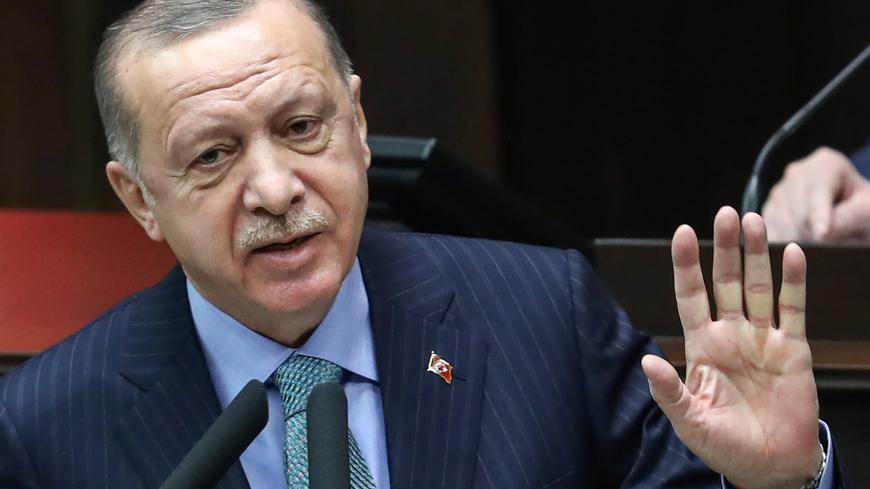 Turkish President and leader of the Justice and Development Party (AK Party) Recep Tayyip Erdogan delivers a speech during a meeting of members of the AK Party at the Turkish Grand National Assembly in Ankara, on Feb. 24, 2021.

Erdogan (again) accuses US of acting with terrorists in Syria

What kind of alliance is this? Turkish President Recep Tayyip Erdogan has, for the second time this month, accused the United States of siding with terrorists in Syria. Reacting to a tweet by Col. Wayne Marotto, spokesman for Operation Inherent Resolve, the US-led mission against Islamic State in Iraq and Syria, Erdogan said on Feb. 22, “What kind of a NATO alliance is this? … They (the US) still act with terrorists.”

Marotto had simply tweeted that the US-led mission “hasn’t changed” and that the coalition “works, by, with & thru our partner force SDF (Syrian Democratic Forces) to defeat Daesh (Islamic State)” in Syria. Marotto’s tweet hardly seemed like news. But it was a trigger for Erdogan.

Background. Erdogan has vowed to expand military operations against Kurdistan Workers Party (PKK) militants in Iraq and Syria after the group reportedly ordered the execution of 13 Turkish hostages on Feb. 13; the PKK claims the hostages were killed in airstrikes by the Turkish military on its base in the mountains of the Kurdistan Region of Iraq, on the Turkish border. The PKK, founded in 1984, is considered a terrorist organization by the United States, Turkey and the European Union. While the allies agree on that, they differ on exactly who the PKK are. Turkey considers the Syrian Democratic Union Party (PYD) and its armed wing, the People’s Protection Units (YPG), extensions of the PKK. But the YPG makes up the core of the US-aligned SDF — and thus is the source of the increasingly sharp differences between Washington and Ankara.

Last week, on Feb. 15, Erdogan warned the United States that “if you want to continue our alliance globally and within NATO, then you must stop siding with terrorists,” as Amberin Zaman reports.

Does Erdogan have another side to choose, though? “One can no longer speak of a Turkish foreign policy as we knew it,” writes Metin Gurcan. Erdogan’s strategy of playing the United States and Russia off one another in crisis regions, especially in Syria, “has come to an end as a result of more assertive moves by the United States, Russia and Europe and, most critically, the change of guard in Washington. The Joe Biden administration and the Kremlin are both signaling that time has come for Erdogan to choose his side,” suggests Gurcan.

Our take. Last week Erdogan said, “We believe that our common interests with America outweigh our disagreements by far.” No doubt he wants better ties with the United States. There is some signaling on a workaround on Turkey’s purchase of the S-400 Russian missile defense system, opposed by the United States, but no signs yet of a breakthrough, as Diego Cupola reports. An understanding on Syria is even harder to fathom, given the deep split on the Kurds. Semih Idiz calls it a “dialogue of the deaf.” Indeed, the leverage the United States has in Syria, besides sanctions, is its relationship with the very Kurdish groups Erdogan sees as terrorists and equal to Islamic State. Gone is the easy connection Erdogan had with former US President Donald Trump, who was willing to shelve human rights — and the fate of the Kurds — in the interests of a deal with Turkey. The United States can continue to try to reconcile the PYD/YPG with those Kurdish groups backed by the Kurdistan Democratic Party of Iraq (KDP), with whom Erdogan has good relations. But don’t expect miracles on this front, as Amberin Zaman reports here. The endgame will require more assertive US diplomacy, starting at the UN Security Council, with some tough talk and trade-offs, with Russia, Turkey and Iran in Syria, as we wrote here last week.

Entrenched? Iranian forces and affiliated militias in Deir ez-Zor province in eastern Syria are trying to boost their influence after Israeli airstrikes on Jan. 13 hit dozens of their sites in the province near the Syrian border with Iraq, reports Khaled al-Khateb from Syria.

“Iranian forces are working to recruit Syrians from Deir ez-Zor and other provinces to join their ranks and form new militias, as part of their plan to cling to their influence and strategic interests in the region. It also conveys a message of confrontation to both Israel and the United States,” adds Khateb.

Gulf: Is China ‘rapidly gaining ground’ on US in the Gulf?

Hearts and Minds. Sam Blatteis, former head of Gulf Government Relations for Google and CEO of The MENA Catalysts, says US companies are still the partners of choice for Gulf governments for “big strategic projects,” with the possible exception of Huawei. When it comes to the “hearts and minds and market share among consumers and the public and the vast majority of people in the Gulf,” however, “it’s definitely the Chinese companies that are light years ahead … certainly of the Russian counterparts … and rapidly gaining ground on their American counterparts.”

COVID as catapult. The painful human and economic cost of the COVID-19 pandemic may have an upside for the digital economy, says Blatteis, which should “catapult forward, several years into the future, in a very short time span.” The virus “created this captive audience in certain ways … to compel both companies and governments, as well as the wider public, to rapidly scale up their tech options.”

Hidden Gems. The Gulf “is like a hidden gem” for high-tech companies, adds Blatteis. “It’s hard to see the region for what it is from Silicon Valley,” he says, speaking to a lack of knowledge and relationships, and perceptions of risks. But “that’s changing,” he says, as tech companies realize that “politics and relationships are the coin of the realm in the region.”

Check out my podcast with Sam Blatteis here.

Gulf: Is the race for private investment undercutting GCC unity?

“Despite the reconciliation process set in motion last month at the GCC summit in Riyadh, there are signs that economic competition between the six GCC member states is heating up as the double shock of the COVID-19 crisis and the volatility of oil prices weigh on Gulf economies, causing high sovereign debt levels,” writes Sebastian Castelier.

Being there. Saudi Arabia, which brokered last month’s reconciliation with Qatar, also is taking care of its own interests. Riyadh announced that companies doing business in Saudi Arabia have two years to set up offices in the kingdom, as a condition of doing business, promising benefits such as zero corporate taxes for 50 years, and a seeming challenge to the UAE, where many of these companies keep their regional offices.

The latest Arab Barometer survey of public opinion in Jordan, Lebanon, Algeria, Libya, Morocco and Tunisia reflects on how Arab citizens are judging and holding their governments to account for how they addressed COVID-19, as well as freedom of expression.

One key finding: Respondents in all six countries preferred engagement with China rather than the United States.

Cool thing: Pharaohs may have used beer in sacrificial rituals

Archaeologists in Egypt have discovered what may be the oldest brewery in the world, in Abydos, which most likely dates back to the days of King Narmer, 5,000 years ago.

The brewery “could have produced 22,400 liters of beer at a time, and its location suggests that the facility supplied funerary rituals for the first kings of Egypt,” according to the archaeological team, and “evidence was found for the use of beer in sacrificial rituals in engravings found at the site.”

Check out the report by Muhammed Magdy.

In case you missed it: Amberin Zaman’s podcast with author of “Daughters of Kobane”

Bestselling author and senior fellow at the Council on Foreign Relations Gayle Tzemach Lemmon speaks to Al-Monitor about her new book, “The Daughters of Kobani,” which tells the story of the women who fought on the front lines of the war against the Islamic State in Syria.

Listen to the podcast here.

What we’re reading: RAND calls for ‘re-balance’ in US Middle East policy

A new RAND Corporation report says the United States needs to “rebalance” its assistance to the conflict-ridden region, pointing out that Israel, Egypt and Jordan received 81% of foreign military assistance in 2019. US policy toward the Middle East, the report says, is “outdated,” with too much focus on arms sales and Iran. Instead, RAND suggests prioritizing "economic investments, governance, diplomacy and programs focused on people.”

You can read our article on the report here and the RAND report here.