Can Turkey fit into the Biden administration’s Syria policy?

The gnarliest problem: Pentagon report says Syrian, Iranian proxies are "most significant" threats to US mission, but the Islamic State isn’t dead yet, and Turkey and the United States still disagree on the Kurds. 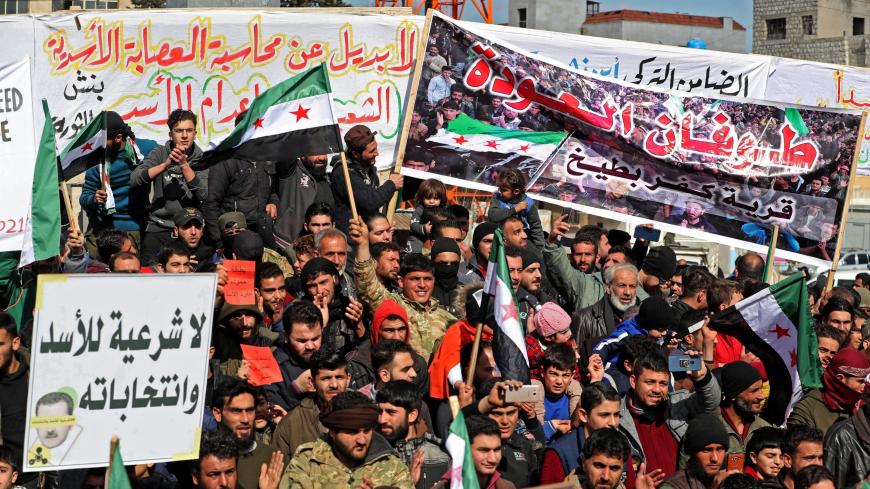 Displaced Syrians demonstrate against President Bashar al-Assad and the upcoming presidential election in the rebel-held city of Idlib on Feb. 19, 2021. - OMAR HAJ KADOUR/AFP via Getty Images

The latest report from the Pentagon’s Inspector General on Operation Inherent Resolve, the US-led diplomatic and military operation against the Islamic State (IS) in Iraq and Syria, warns that Syrian and Iranian proxy forces, not IS, represent the "most significant security threats" to US interests.

The Pentagon is not writing off the threat from IS, but the threat has evolved and changed over the past six years. The US mission "has entered its fourth and final phase," the report says, with IS "territorially" beaten in both countries and the coalition focused on helping the Iraqi security forces and the Syrian Democratic Forces (SDF) build their capacity "to ensure the enduring defeat of" IS.

Here’s the good news, and it’s worth repeating: Operation Inherent Resolve has largely been a success story since it was launched by the Obama administration in 2014. The US-led international coalition territorially defeated the Islamic State, which in 2014 had overrun large parts of Iraq and Syria, terrorizing the populations it controlled. This was no slam dunk. Those were dark days when IS took Raqqa and Mosul, and murdered, raped, tortured and beheaded those who crossed them.

That was then. The execution of the US-led policy to counter and defeat IS has been mostly textbook: the mission sustained bipartisan congressional support, across two (both Republican and Democratic) administrations. There was near flawless civilian and military coordination, both within the US government and across the coalition, as well as with local partners of varying capabilities. By March 2019, the United States and its partners had reclaimed all territory seized by IS.

And it all occurred amid steady criticism, from both the right and left, that the United States was stepping back from its commitments in the Middle East.

The United States has in the past year cut its force presence from 3,000 to 2,500 in Iraq, with no appreciable impact on the US training mission, according to the report. NATO said this week it will increase its stabilization and training deployment in Iraq to 4,000, as Jared Szuba writes here. The United States has about 900 troops in Syria operating from a base near the Syria-Jordan border.

Islamic State not dead yet

IS remains a "cohesive organization," operating a "low-level insurgency" in both Iraq and Syria. It has between 8,000 and 16,000 fighters in both countries, down from between 14,000 and as many as 18,000 last year, according to Pentagon estimates.

Russian, Syrian, Iranian and aligned armed groups have increased the tempo of operations against IS in Syria, separately from US-led missions. Sultan al-Kanj reports here from Syria on the ongoing skirmishes between Syrian government and aligned forces and IS in the Aleppo-Hama-Raqqa triangle, as well as in the desert areas around Homs and Deir ez-Zor.

But it is the United States and its on-the-ground allies in the fight, the SDF, who have been decisive in the fight against IS in Syria. The US partnership with the SDF is vital. Although the SDF has "proved more capable of defending critical infrastructure," including oil fields in areas it controls, it still conducts most operations with US forces. The SDF has no air, reconnaissance or surveillance capabilities.

In other words, without US support, the SDF would likely be ineffective against IS and vulnerable to the many forces arrayed against it, including IS, Syria and regime-aligned militias and, of course, Turkey and its proxies. IS knows the SDF is vulnerable: Hussam Hammoud has the report here on the IS challenge to the SDF in Raqqa, which had been the capital of the IS caliphate before its defeat, and where Arab-Kurdish tensions remain raw.

In the three-dimensional chess that is Syria, Turkey is perhaps the most complicated factor for the United States. The Pentagon report is mostly silent on Turkey, a NATO ally that remains at odds with US support for the SDF, and is therefore not aligned with US or coalition policy toward Syria.

Erdogan has blamed the Kurdistan Workers Party (PKK) for the killing of 13 Turkish hostages on Feb. 13 during a Turkish military operation against the militant group in Iraq’s Gare mountains. The PKK claims the hostages were killed in airstrikes by the Turkish military.

Turkey, as well as the United States and the European Union, consider the PKK a terrorist group. For Turkey, the Syrian Democratic Union Party (PYD) and its armed wing the People’s Protection Units (YPG) are the Syrian branch of the PKK: no difference. And as bad as IS or al-Qaeda.

The trouble is, the YPG makes up the core of the US-aligned SDF — and therefore is a source of seemingly irreconcilable differences between Washington and Ankara.

This week Erdogan vowed "to fully eliminate" the PKK and said "new strategies are being developed to free Arabs, Kurds and Turkmens from the yoke of the terrorist organization in Syria" — meaning the PYD/YPG, and therefore the SDF.

Turkey has Russia and Iran on its side in opposing US support for the SDF in northeast Syria. While the three aren’t always on the same page, they keep talking about finding common or middle ground on disagreements, such as over next steps in Idlib, as Khaled al-Khateb reports here. Russian President Vladimir Putin still hopes to orchestrate an eventual deal between Erdogan and Syrian President Bashar al-Assad where the Kurds would agree to some form of stunted autonomy under Syrian state control, but Erdogan and Assad aren’t yet close to burying the hatchet.

This week’s meeting of envoys from the three countries (the so-called Astana group, because it first met in Kazakhstan) affirmed their rejection of the US mission as contrary to Syrian sovereignty. The Astana bloc’s increased diplomatic role has stymied the UN-mediated political process; the bloc, and Assad, prefer inertia to progress, as Kirill Semenov explains here. UN Syria envoy Geir Pedersen said last month that "we can’t continue like this."

The Biden administration got off to a fast start in parts of the Middle East, implementing consequential shifts in US policy toward Iran and Yemen. Two highly regarded diplomats have been appointed as envoys — Robert Malley for Iran, Tim Lenderking for Yemen — who have the charge of US Secretary of State Antony Blinken to restart nuclear diplomacy on Iran and to end the war in Yemen.

But nobody yet has been named US envoy for Syria, a post held in the Trump administration by James Jeffrey and Joel Rayburn.

Last month, before stepping down, Rayburn described Syria as “one of the most dangerous crises in the world in both geostrategic and humanitarian terms.”

Sean O’Brien, the World Food Program representative and country director in Syria, said this week, "The situation has never been worse."

Unless or until there is a reset on Syria, the United States will operate on objectives inherited from the Trump administration, which are generally consistent with the coalition mandate: the enduring defeat of IS, al-Qaeda, and affiliates; the withdrawal of Iranian forces and proxies; and a political resolution of the conflict according to United Nations Security Council Resolution 2254.

Pedersen told the Security Council on Feb. 9 that "constructive international diplomacy" is urgently needed to salvage the UN-led political process, which is barely on life support. The risk of a chronically failed state in Syria and the humanitarian tragedy, going on 10 years, should be compelling enough. But there is a void. The process will require some tough talk, and some realistic tradeoffs, by Washington with Ankara, Moscow and eventually Tehran. Otherwise, Syria will risk collapse, chronic poverty and hardship, and increased activity by IS, al-Qaeda and their offshoots. The Security Council, with a fully engaged United States, needs to reclaim the initiative on Syria if the country is to stand a chance.