In shadow of COVID-19, US-led battle against Islamic State continues

A Pentagon report declares the Islamic State a "low-level insurgency" as the United States and Iraq prepare for strategic dialogue. 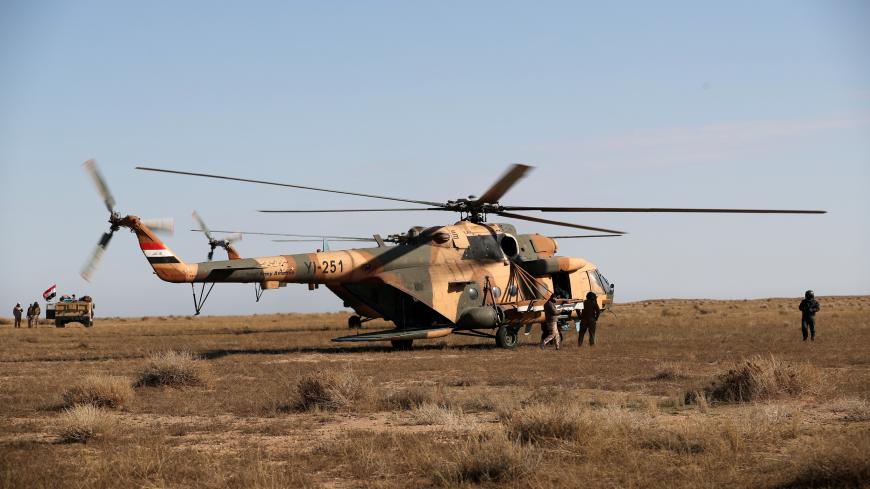 The latest quarterly report by the Department of Defense Inspector General on Operation Inherent Resolve, the US military operation to defeat the Islamic State in Iraq and Syria (IS), reveals how the coronavirus pandemic may have given IS a breather, if a temporary one, to pick up its operations.

The terrorist group remains a "low-level insurgency," unable to hold territory, according to the report. But there are some worrying signs.

While US-Iraq security cooperation is likely to deepen, the Syrian Democratic Forces (SDF), the US on-the-ground partner against IS in Syria, is under pressure and increasingly constrained by its conflict with Turkey, as well as the coronavirus.

Credit where it's due

As we wrote back in January, the US campaign against IS does not always get the credit it deserves.

A so-called narrative of a US retrenchment from the Middle East sometimes skates over an overwhelming success, and it shouldn’t.

In 2014, the so-called IS caliphate had overrun large chunks of Iraq and Syria, including Mosul in Iraq and Raqqa in Syria, ruling with unspeakable terror in the name of Islamic law.

The Obama administration assembled an international and regional coalition, spearheaded a relentless military campaign using air power and Special Operations Forces, partnered effectively with the SDF in Syria and bucked up Iraqi security forces, which had initially suffered some withering defeats.

The campaign had bipartisan support in Congress, featured textbook diplomatic and military coordination, and experienced a smooth transition from the Obama to the Trump administration, which finished the job on its watch.

The territorial defeat of IS in March 2019 and the US killing of IS leader Abu Bakr al-Baghdadi in October 2019 were huge wins for the US-led coalition.

As a result of this success, the Pentagon report this month, which covers the period January-March 2020, now classifies IS as a "low-level insurgency," unable to hold territory.

The Pentagon report implies some potential good news for resumed US-Iraq security cooperation against IS.

US counter-IS operations in Iraq were hindered in the first quarter of the year by the virus that causes COVID-19, the Iraqi government stalemate and US-Iran tensions playing out in Iraq.

Since the report, these seems to be some promising developments on all three fronts.

With regard to the coronavirus, the Pentagon, which had cut back on joint operations because of COVID-19, anticipates inviting coalition forces back to Iraq soon, as Jared Szuba reports. The United States maintains about 5,000 forces in Iraq.

The Iraqi government stalemate is now over, and complications with Iran also have subsided.

Iraq has a new government led by Prime Minister Mustafa al-Kadhimi, who previously served as head of Iraq’s National Intelligence Service, which was known for its professionalism and effectiveness in the battle against IS.

Iran backs Kadhimi and it seems, at least for now, that Iraq may be getting a reprieve from US-Iran hostilities playing out on its territory.

The new Iraqi government has cracked down on some of the Iran-backed militias that have attacked Iraqi protesters, as Ali Mamouri reports.

IS isn’t finished, by any means. It is seeking a comeback in Iraq under the cover of the pandemic, Szuba writes, and has pressed attacks on Iraqi and Iraqi Kurdistan Region (peshmerga) security forces,

IS likely started crop fires in Makhmour, an agrarian town in the "disputed territories" between the Kurdistan Region and federally administered areas in northern Iraq, as we report here.

These regions, which are ethnically and religiously diverse, have been particularly vulnerable to IS penetration and terrorism.

They are also a fault line for tensions between Erbil, the capital of the semi-autonomous Kurdistan Region of Iraq, and Baghdad, which also include unresolved questions over budget allocation and oil revenue sharing. The peshmerga are seeking joint patrols and increased cooperation with Iraqi security forces in these disputed areas,

The Syria-Iraq border has also become a staging area for IS attacks in both countries, though more so in Syria, as Shelly Kittleson reports.

The Pentagon study indicated that US cooperation with the SDF, especially in preventing IS control of oil infrastructure, continued despite the pandemic and fallout from Turkey’s invasion of Syria and occupation of northeastern Syria in October 2019, which targeted Kurdish administered areas.

The backbone of the SDF is the Kurdish People’s Protection Units (YPG) that Turkey considers a terrorist group.

The Pentagon study reported “no further impact to defeat-ISIS operations this quarter due to the Turkish incursion, but said that ongoing tension between the Turkish military and the SDF continued to divert SDF attention and resources away from the fight against ISIS.”

There are no signs as yet that seemingly irreconcilable differences among the United States, Turkey and the SDF in Syria are getting better since March. Amberin Zaman writes that Turkey has sought to undercut a US-backed intra-Kurdish dialogue, while throttling water supplies as a means to pressure mostly Kurdish territories in northeast Syria. Fehim Tastekin reports on population transfers by Turkish forces and allied armed groups. Elizabeth Hagedorn has the story here on how rioting by IS prisoners in SDF-controlled prisons, the second such incident since March, further underscores the fragility of the security situation.

In Iraq, as we wrote here last week, the battle against IS remains central to US-Iraq security cooperation, and could even be the foundation for a regional strategy and alliance to combat extremism.

In Syria, the United States does not have a government partner and varying degrees of tensions with many of the key regional parties — Russia, Turkey and Iran. US forces work within a complex conflict environment where the risk of miscalculation and escalation involving US, Russian, Syrian, Turkish, Iranian and various other armed and terrorist groups remains high, as the Pentagon report points out.

Given those complexities, the focus on IS remains central to US regional strategy. There is a lot to build on, especially with the new Iraqi government in the strategic dialogue next month.

The Syrian picture is more cloudy, as the irreconcilable differences among the US-allied SDF and NATO ally Turkey remain, well, irreconcilable.

The Pentagon report notes that the "existential threat" to the SDF "is no longer ISIS but Turkey."

If there is to be some diplomacy shake up in Syria, it will likely come at the presidential level among Donald Trump, Recep Tayyip Erdogan and Vladimir Putin.

Absent that, expect more of the same, and a likely degradation of the security situation, not just in northeast Syria, but in the northwest, where Syrian forces could at any time resume operations in Idlib, drawing in Turkish forces.

Among a few truths in international relations is that you cannot expect sustainable economic development and reconstruction in an unstable or conflictual environment. The first order of business is always security, and in wars, ending them. Then and only then can the rebuilding begin. There is no post-conflict stability without the "post."