The Syrian opposition's self-styled interim government is seeking to bring the coronavirus vaccine to a specific category of the population of northwestern Syria. 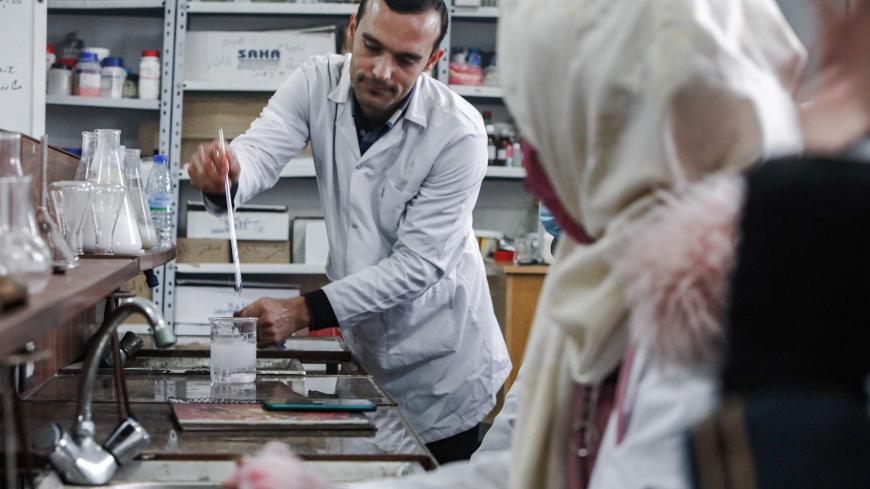 Syrian students from the "Aleppo University in Liberated Areas," controlled by the pro-Turkey opposition, attend a tutorial at a laboratory facility in Marea in the rebel-controlled northern countryside of Aleppo province, while mask-clad due to the coronavirus pandemic, Syria, Nov. 26, 2020. - BAKR ALKASEM/AFP via Getty Images

The Ministry of Health in the Syrian opposition's self-styled interim government announced July 10, 2020, the first COVID-19 case in northern Syria — a doctor who had recently returned from Turkish territory. After symptoms appeared, he isolated himself in Bab al-Hawa Hospital on the Turkish-Syrian border. The Ministry of Healthy then called for an emergency meeting of the coronavirus crisis unit in order to activate the emergency plan in the area.

In late 2020, the opposition’s Ministry of Health submitted an official request to the COVAX Initiative of the World Health Organization (WHO) to obtain the COVID-19 vaccine and distribute it to the residents of northwestern Syria. As the region is expected to receive vaccines in late March, the concerned parties — namely WHO, UNICEF and the Syria vaccination team — are coordinating methods and drawing up plans to vaccinate residents while waiting for final approval from the COVAX platform.

Maram al-Sheikh Mustafa, minister of health in the opposition's self-styled interim government, told Al-Monitor, “The WHO has agreed to initially grant us 1.7 million doses of the British AstraZeneca vaccine to cover 850,000 people. The vaccination process will be divided into three stages: The first will be implemented in 2021, and it should cover 20% of the entire population of the area, estimated at 4.2 million people. This stage targets medical workers, people with chronic diseases and the elderly over 60 years old.”

He said, “The first batch of vaccine doses — amounting to 134,000 doses intended for 60,000 people — is expected to arrive late March. We will first target the health sector employees and humanitarian workers who are more likely to contract the virus. Since the outbreak, 10 front-line workers have died, eight of whom are doctors, one nurse and one laboratory technician. They were among the 2,713 front-line workers who had tested positive in the area.”

Mustafa noted, “The second batch of the vaccine will arrive a few weeks after the first, and will target approximately 90,000 residents of the liberated areas, who are over 60 years old, as each person will be given two doses. The third and fourth batches will arrive during the third and fourth quarters of 2021, and the targeted category will be determined after these batches arrive.”

He added, “The vaccine must be stored at a very low temperature so as not to spoil its validity and this is something that we are currently working on by setting up special centers to receive the vaccine. I would like to stress that we refuse to supply the vaccine through the regime-controlled areas.”

Mustafa explained, “During the last four weeks, we have had a significant decline in COVID-19 cases — only one case was documented in the past few days. However, this does not mean the virus no longer exists; there might be some untested cases. This is why residents must abide by the preventive measures and remain very alert, as well as cooperate with the vaccination teams to take the vaccine in order to protect themselves and those around them.”

Mohammad Hallaj, director of the Syria Response Coordination Group, an organization operating in northern Syria, told Al-Monitor, “We have documented 21,136 cases of COVID-19 in cities and towns in northern Syria as of Feb. 19. There have been 18,022 recoveries and 408 deaths. The displacement camps have had 2,299 positive cases so far, distributed over 143 camps on the Syrian-Turkish borders and within the random camps adjacent to cities and towns in the liberated areas.”

He said, “There are 45 medical centers dedicated to COVID-19 cases in northwestern Syria, divided into 14 hospitals, nine of which are for severe and above-average cases, and 31 centers for isolation and quarantine. All of the doctors are working hard to monitor the condition of patients and fight battles to save their lives, in an area exhausted by war, lack of resources and deteriorating living conditions. Medical organizations are working to identify the target groups for the vaccine, determine the necessary doses, review and develop safety standards for the preservation and distribution of vaccines, and improve the capabilities of medical personnel.”

All the cities and towns of northern Syria, which have become the largest residential community hosting hundreds of thousands of displaced people, are barely adhering to individual means of prevention such as wearing face masks or using sanitizers in public places. The markets are crowded and the movement of pedestrians and cars does not reflect the presence of the pandemic that is still threatening humanity and killing thousands around the world. People are too concerned about securing their livelihood to think about infections and diseases.