Russia seeks to outplay the US in Libya

While Russia's preferred candidates lost in last week's vote for interim leadership in Libya, Moscow still has a strategy for reinforcing its influence in the country. 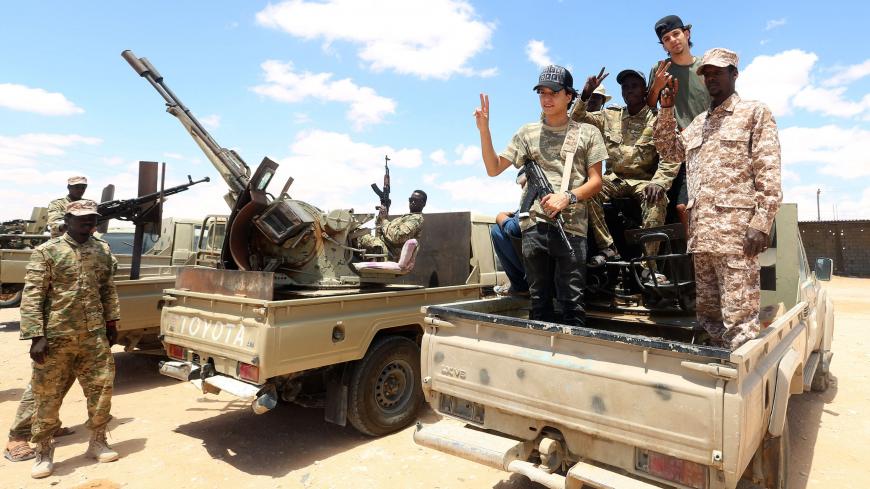 Fighters loyal to the UN-recognized Libyan Government of National Accord (GNA) secure the area of Abu Qurain, halfway between the capital, Tripoli, and Libya's second city, Benghazi, against forces loyal to Khalifa Hifter, who is based in eastern Benghazi, on July 20, 2020. - MAHMUD TURKIA/AFP via Getty Images

On Feb. 5, members of the UN-led Libyan Political Dialogue Forum (LPDF) voted on interim leadership for its executive council, selecting Mohammad Younes Menfi as chairman of the Presidency Council and Abdul Hamid Mohammed Dbeibah as interim prime minister. The outcome of the vote by the 74-member forum came as a big surprise to external sponsors of the Libyan peace process — and Russia was no exception here. Moscow believed that a list it had agreed upon with Ankara and Cairo, led by Interior Minister Fathi Bashagha and Chairman of the House of Representatives Aquila Saleh, should have claimed the victory.

On the other hand, for Russia in Libya, by and large nothing has changed after the vote. Moscow still expects that its favorite figures will retain their positions, both in the new interim government of Libya — possibly receiving ministerial portfolios there — and following the national elections set for Dec. 24, 2021.

It is significant that precisely a week before the LPDF vote, Moscow received delegations from the opposing sides from the west and east of the country.

At the same time, a delegation from Libya’s eastern-based government headed by Minister of Foreign Affairs and the International Cooperation of the eastern-based government Abdelhadi Khuweij was in Moscow. In particular, he met with Russian Deputy Foreign Minister Mikhail Bogdanov. Khuweij spoke to the Russian newspaper Kommersant about the economic part of the talks in Moscow, saying the two sides had discussed projects for railway construction, electricity, education and health, including the possibility of supplying the Sputnik V coronavirus vaccine to Libya.

And on Jan. 25, Bogdanov received in Moscow a member of the Libyan House of Representatives — also known as the Tobruk government — Abdul Nasser Ben Nafi.

Moscow believes Washington organized the current stage of the peace process in Libya in its own interests while US diplomat Stephanie Williams was the interim head of the United Nations Support Mission in Libya. At the same time, Russia does not consider it expedient to openly oppose these steps by the United States, which may be beneficial to the Kremlin to a certain extent.

The Kremlin expects that certain figures with whom the Russian side was able to establish constructive interaction will retain their positions and influence in the country. It also cannot be ruled out that in the event of the failure of the current stage of a political settlement in Libya, Moscow — which actively receives representatives from both the west and the east of the country — will be ready to support an alternative unofficial format of the inter-Libyan dialogue. Such a format could be conducted during a joint visit of the delegations from the east and west in Moscow.

Maiteeq is one of the politicians in western Libya with whom Moscow works most actively and on whom it counts as a conductor of its interests. He retains some chances of getting a ministerial portfolio in the new government, and he will likely remain in the highest echelons of power after the December elections. He has been a frequent visitor to the Russian capital since 2017 and also visited Moscow with GNA Foreign Minister Mohammed Siyala in June 2020.

In September 2020, Maiteeq held important negotiations in Sochi, where he signed an agreement with one of eastern Libyan strongman Khalifa Hifter’s sons to unblock Libyan oil exports. This was a landmark event that confirmed Moscow's role in Libyan affairs and demonstrated its ability to find a common language with the Libyans, bringing the warring parties to the negotiating table on its territory. Then, at the end of December 2020, Maiteeq together with Siyala again arrived in the Russian capital.

At the same time, Saleh, who although unable to become chairman of the Presidential Council retained the post of head of the House of Representatives, is still the Kremlin's favorite among political leaders in eastern Libya. This happened after the Russian side once again became convinced that it could no longer trust Hifter, who finally discredited himself in front of his external sponsors against the backdrop of the collapse of the operation to conquer Tripoli. It is important to recall that it was Russian experts who prepared for Saleh a project to reform the presidential council and the GNA, some provisions of which are still in use.

At the same time, the Russian side has not yet developed relations with the influential Minister of Internal Affairs in the government of Fayez al-Sarraj, Fathi Bashagha, who has very close ties not only with Turkey but also with Western countries.

The head of the Ministry of Internal Affairs of the GNA would like to visit Moscow in order to hold talks and establish a constructive dialogue. In particular, it was planned that on Jan. 28, Russia was not supposed to meet Maiteeq, but Bashagha, who received an invitation from Bogdanov.

There are two factors to consider here. An informed Russian source working on the Libyan file told Al-Monitor that work on organizing Bashagha’s visit to Moscow was carried out in the spring and summer of 2020, and possibly started even earlier. But then the official Russian side was pressured by various influential nongovernmental structures, including, for example, the Foundation for the Protection of Traditional Values, to cancel the visit. The latter is a Moscow-based organization with links to an infamous Russian troll farm. Two of its employees — Maxim Shugaley and Samer Sueyfan — were being held in Libya at the time Bashagha’s visit was being prepared, after having been detained on charges of working for Seif al-Islam Gadhafi, son of ousted leader Moammar Gadhafi. The head of the Ministry of Internal Affairs of the GNA was directly accused of their capture.

Therefore, at that time, negotiations could not take place. Bashagha was also extremely negatively presented in a Russian feature film about the fate of the two men held in Libya, which aired on the Russian federal channel NTV. And in a number of Russian media outlets, the head of the Libyan Interior Ministry is referred to as "the leader of the terrorists." Accordingly, when Moscow itself began to express its interest in developing ties with Bashagha, this negative background hindered the development of any dialogue.

In fact, many politicians in western Libya, including those related to the GNA, have tried to compete with each other to become Russia's favorites. So the process of freeing the Russian nationals was delayed precisely because of the competition between the most influential players in the Libyan GNA, such as Sarraj, Maiteeq and Bashagha.

The decision to release the pair was made at the end of October, and Sarraj supported this decision. But when the interior minister and the prosecutor general wanted to release them and present their release as their own initiative, then there was a delay. The GNA chairman did not want the decision to release them to be made behind his back or through bypassing him. Sarraj feared that Bashagha would look good in the face of Moscow, so he postponed the release to try to prevent any rapprochement between Bashagha and Russia, as this could strengthen the position of the interior minister. The Russians were only released in December 2020.

Therefore, the arrival of Maiteeq instead of Bashagha to Moscow can also be seen as a reflection of internal competition.

Also, Moscow does not discount the possibility of negotiating with alternative candidates who generally oppose the current format of the inter-Libyan dialogue and, if it fails, may play a role. In September 2020, former head of the General National Congress of Libya and now head of the Ya Biladi Party Nouri Abusahmain visited Moscow, where he held talks with Bogdanov and representatives of the Russian security agencies.

It is also important to pay attention to the presence at the January talks in Moscow — among the delegation from Benghazi — of head of the General Commander's Office of the Libyan National Army (LNA) Hayri al-Tamimi. Within the framework of the military block of contacts, his presence could hint at Russia's plans to maintain its military presence in Libya and find legitimate grounds for this. This becomes especially important against the backdrop of increasing pressure from Washington after the arrival of President Joe Biden’s administration over the presence of Russian mercenaries from the Wagner group.

It cannot be ruled out that Russia would like to create its own permanent military bases in Libya, primarily where Russian mercenaries are already present. Thus, a naval base could be created in Sirte, or an air force installation in Jufra. The problem is that Sirte is named as the city planned to house the new authorities — the GNA and the Presidential Council — and the city itself should be demilitarized. The withdrawal of mercenaries is the first stage of this process.

However, a possible option for maintaining the Russian presence in Sirte and Jufra could be the deployment of an official Russian mission of the Ministry of Defense at these bases, which could assist the new Libyan authorities in creating a unified armed force, and Russian mercenaries could be withdrawn from the country. To do this, Russia will need to obtain the consent of the officially recognized new authorities in Libya, and for this Moscow can use "its own figures" in the Libyan field.

Also, on this issue, Russia and Turkey could probably reach a mutual understanding. It should be borne in mind that Ankara is already creating two bases for itself in the country — an air base in al-Watiya and a naval base in Misrata. A rapprochement of the positions of Moscow and Ankara on the Libyan track is also to be expected in view of the plans announced by the United States about the need to free Libya from a foreign military presence — not only Russian but also Turkish or Emirati — which was directly stated by US Ambassador to the UN Security Council Richard Mills. This US position contradicts the interests of these states, which on the contrary are seeking to gain a foothold in Libya. They will now be ready to make mutual concessions and compromises to realize plans to deploy military contingents in this country.