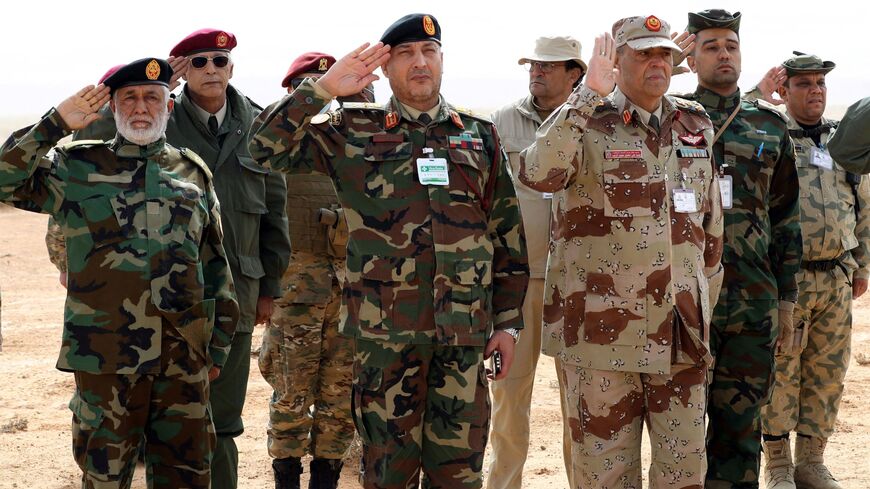 A delegation of the Russian General Staff visited Tripoli on Nov. 10. The Russian military was received by the chief of staff of the Libyan army controlled by the Presidential Council, Lieutenant General Mohammed al-Haddad, and other leaders of the armed forces operating in western Libya.

Col. Gen. Alexei Kim, deputy commander-in-chief of the Russian Ground Forces and head of the Russian delegation, said that he arrived in Tripoli "to renew and continue to develop relations," as well as "to reaffirm his readiness to work and support the Libyan army."

Haddad, in turn, emphasized "the depth of relations between the two countries" and "the role of the Russian military establishment in the restoration of the Libyan army."

“We hope that Russia will play an important role in uniting the Libyan armed forces,” said the head of the Libyan General Staff.

Libyan armed forces are still divided. Despite the fact that the leadership of the armed forces should be in the hands of the chairman of the Presidential Council of Libya, Muhammad Menfi, his command applies only to the armed formations in the west of the country. These forces fought against the commander of the so-called Libyan Arab Armed Forces (LAAF), Khalifa Hifter, and repelled his offensive in Tripoli in 2019-2020. Hifter himself refuses to obey the orders of the chairman of the Presidential Council and his chief of staff, Haddad, who was the head of the central military zone during the battles for Tripoli.

At the moment, the LAAF is an independent army in the east and south of the country, while the west of Libya is controlled by the military forces of the Presidential Council. Despite statements about the need for their integration, no practical steps have been taken. Also, according to the UN, Russian private military contractors that support the LAAF are still in Libya.

At the same time, Moscow has no doubts about the legitimacy of the new composition of the Presidential Council, headed by Menfi, and the Interim Government of National Unity (GNU), chaired by Abdulhamid Dbeibah. The GNU was approved by the House of Representatives on March 10, 2021. Dbeibah visited Russia in April, where he held talks with the Prime Minister of the Russian Federation Mikhail Mishustin.

Nevertheless, a new moment in relations between Moscow and Tripoli was the recognition by Russia of those military formations that operate under the auspices of the Presidential Council in western Libya. It was these forces that fought against LAAF under Hifter. Earlier, Moscow, although it was in contact with the Government of National Accord (GNA) of Faiz Sarraj, the predecessor of Dbeibah, avoided any official relations with these military structures, and many Russian media and pro-Kremlin activists called these armed groups "terrorists."

Russian Defense Minister Sergei Shoigu has repeatedly received Hifter in Moscow, and all Russian-Libyan ties in the security sphere were conducted through Hifter. But Hifter is now forced to share his role in the field of defense and security with Haddad.

Hifter and Seif al-Islam Gadhafi (the son of late Libyan dictator Moammar Gadhafi), who were considered Russian favorites, have both applied as candidates in the presidential elections set for Dec. 24. However, Moscow is in no hurry to express its open support to either candidate.

In fact, there is skepticism in Russia about the support for the younger Gadhafi among the Libyans. In particular, according to Mikhail Bogdanov, special envoy of the President of the Russian Federation for the Middle East, Gadhafi is supported only by "certain tribes in certain regions of the country." Nevertheless, Russia is likely to continue to maintain contacts with him, hoping he can act as an important re-balancer or spoiler in the elections and in the future can also play in the interests of Moscow.

Many other possible presidential candidates are acceptable to Russia, including Agila Saleh, chairman of the House of Representatives, as well as former deputy prime minister in the government of Sarraj Ahmed Maiteeq, with whom the Russian side has developed a constructive dialogue. This also applies to the current interim leaders of the country — Menfi and Dbeibah. Thus, Russia seeks to put its eggs in different baskets.

Probably the most uncomfortable figure for Russia is Fathi Bashagha, the former Minister of Internal Affairs of the GNA. However, Bashagha was looking for opportunities to establish closer contacts with Russian officials, according to sources familiar with the mediation between Russia and Libyan politicians.

Moscow also likely realizes that it will have to continue to work with the current Presidential Council and  GNA for some time, possibly much longer than one or two months, if the elections in December are postponed. Therefore, Russia is actively cooperating with the current interim Libyan authorities.

In particular, at the end of October it was decided to create a "joint Libyan-Russian committee", which will deal with trade and economic cooperation between the two countries. From Libya, Minister of Oil and Gas Mohammed Aoun was appointed as co-chairman, while from Russia, Minister of Energy Nikolai Shulginov was placed on the committee.

In turn, the Russian oil production company Tatneft resumed geological exploration in Libya, according to a report by the Russian TASS agency on Oct. 15. “Currently, the company is starting to complete work on the wells of one of the contract blocks, the drilling of which was suspended due to the situation on the ground,” Tatneft said.

Now, according to Nail Maganov, General Director of Tatneft, the company is ready to fully resume oil production in Libya, and for this Tatneft plans to create a joint venture with the National Oil Company.

Also, the Russian Gazprom EP International resumed oil production in Libya as part of a joint project with Wintershall Dea in the fall of 2020.

Thus the activity of Russian oil companies in Libya may lead to the legalization of the activities of Russian private military contractors, which will be concentrated on protecting Russian concessions or training Libyan security guards.

In addition, the Russian military's contacts both with the structures of Hifter and with representatives of the general staff in Tripoli may allow Moscow to create its own military facilities. This will initially have the goal of facilitating the training and education of the Libyan military and integration of all armed groups operating in Libya into a single army. Also, one cannot exclude the possible coordination of Russia and Turkey in this direction to maintain their own military presence in this country, despite international pressure.