Can Hamas run — and win — on its record in Gaza?

With legislative elections just three months away, Hamas is trying to rally its factions and constituents on a unified program. 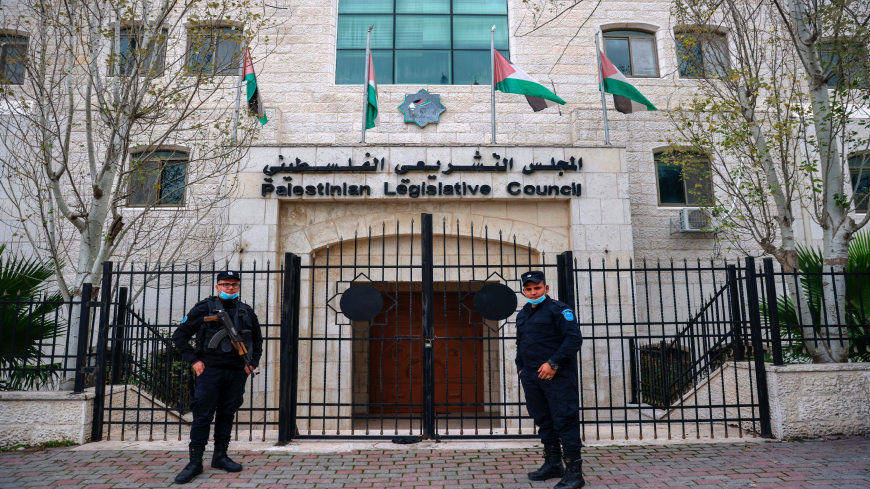 Members of the Palestinian security forces stand guard outside the Legislative Council building in the occupied-West Bank town of Ramallah, on Jan. 16, 2021. Palestinian President Mahmud Abbas announced dates for the first Palestinian elections in more than 15 years, setting legislative polls for May 22 and a July 31 presidential vote. Abbas's Fatah party, which controls the Palestinian Authority based in the occupied West Bank, and the Hamas Islamists, who hold power in Gaza, have for years expressed interest in taking Palestinians back to the polls. - AHMAD GHARABLI/AFP via Getty Images

Palestinians have not had an election in 15 years; the last legislative vote was held in January 2006, which Hamas won, and the last presidential elections were in January 2005 and were won by Abbas.

On Feb. 3, Khalil al-Hayya, a member of Hamas’ political bureau, announced at a press conference in Gaza City that Hamas’ priority is to bring together all Palestinians under a unified political, electoral program, saying that Hamas will support the formation of a national unity government after the success of the elections. He added that should the factions agree on a minimum number of items in the program, doors would be wide open for a greater Palestinian consensus.

The Palestinian factions have not yet commented on Hayya’s statement about a unified electoral program, which is a first for him. Yet Hamas’ intention to gather all factions around a unified political, electoral program may contradict the idea of electoral competition.

Meanwhile, Palestinian factions, including Hamas and Fatah, attended a meeting in Cairo Feb. 8 to discuss the electoral race. In a joint statement issued Jan. 9, the factions said they agreed on the “mechanisms” to advance the elections and vowed to respect their outcome.

Hamas spokesman Hazem Qassem told Al-Monitor, “Hamas’ political program (for the elections) will take into account the Palestinian situation in light of the attempts to liquidate the Palestinian cause. The movement seeks to formulate a joint program with all actors in the Palestinian arena. It will include its (Hamas’) plan to build a new political system similar to the Palestinian Authority (PA) and the Palestine Liberation Organization (PLO) in a way that ensures the participation of all Palestinians to be able to confront the Israeli blockade imposed on the Gaza Strip (and restrictions) in the West Bank and Jerusalem.”

He added, “Hamas believes that the electoral program should include both the political and service aspects and deal with the Israeli blockade by strengthening solidarity among the Palestinian components, as well as taking into account the utmost levels of social justice.”

Despite the importance of including political issues in its program, Hamas is aware that other priorities are on the mind of Palestinians, who are suffering under deteriorating living and economic conditions. This requires Hamas to focus its program on the people’s demands for basic living services that have severely worsened in the past years.

Hussam al-Dajani, professor of political science at al-Ummah University, told Al-Monitor, “Every faction has the freedom and right to prepare its own electoral program to present to voters. But it is important for the factions to agree on a joint reference in their electoral programs, since each faction relies on different political references, such as the Oslo Accord or the National Unity Accord. However, the participation of Hamas, and the Islamic Jihad in particular, in the elections requires steering clear of the Oslo Accord (which both movements oppose). I believe Hamas seeks to reach a common political reference with the rest of the factions by running for elections in a joint list.”

Several political documents have been issued by many Palestinian factions in previous years in order to reach common ground, such as the National Conciliation Document of the Prisoners of 2006, the Palestinian National Unity Accord of 2011 and the final statement of the 2020 meeting of the general secretaries of the Palestinian factions, which raises many questions about the extent of Hamas' ability to gather the rest of the factions under a joint electoral program.

The Palestinian National Unity Accord was signed by all Palestinian factions in Cairo, according to which they agreed on a set of issues, including the PLO, elections, security, national reconciliation and prisoner issues.

Wasel Abu Youssef, member of the PLO’s Executive Committee, told Al-Monitor, “The PLO factions have a political program based on the establishment of a Palestinian state within the 1967 borders, while Hamas and the Islamic Jihad refer to the National Unity Accord, which has a wider margin. In terms of the service program, I do not think that one faction can oblige others to adhere to its own program. Elections are a democratic process, and each faction has the right to convince its voters of its own program.”

However, Hamas was unable to implement its electoral program, especially in matters of economic services, despite holding the majority of seats in the Palestinian Legislative Council for 15 years, whether because of the Israeli blockade or because its governmental and administrative experience in government institutions is still relatively new.

The legislative elections are about a hundred days away, which is enough time for Hamas and the rest of the factions to present their individual or joint electoral programs, even if previous Palestinian electoral experiences have shown that each faction wishes to distinguish itself from other factions, in order to win the largest number of votes on its own.