Hamas briefly postponed announcing its participation in the Palestinian legislative elections in what was likely a show of independence. 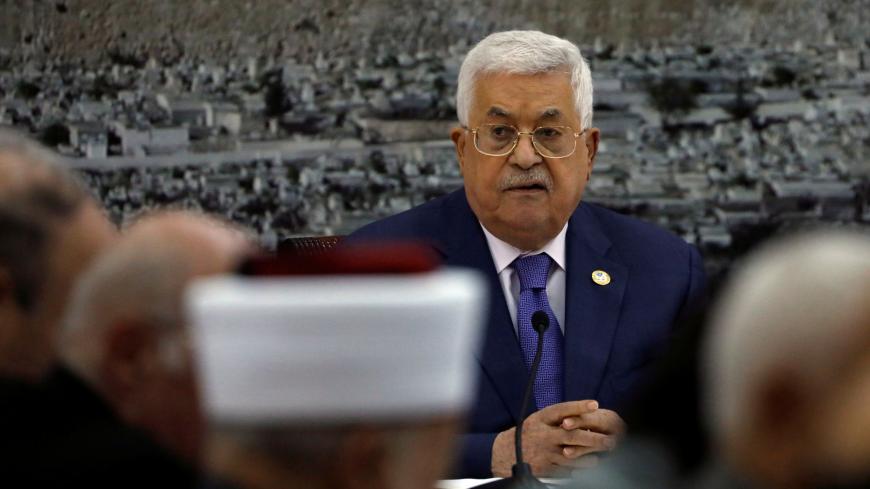 As Palestinians awaited Hamas' official reaction to the proposed Palestinian legislative elections, the movement unexpectedly announced Nov. 26 that its response would be postponed in condemnation of the Palestinian Authority's treatment of former prisoners who staged a sit-in after their income was withheld for 11 months. The movement protested that the PA’s behavior violated the principle of freedom of opinion.

Hanna Nasser, head of the Central Election Commission, arrived in the Gaza Strip on Nov. 25. The following day, he met with the head of Hamas' political bureau, Ismail Haniyeh, in his office. Following the meeting, Haniyeh held off on responding to the call. A few hours later, Haniyeh declared that Hamas would participate in the legislative elections and sent Abbas a written letter explaining Hamas' position.

In the early morning of Nov. 26, Palestinian security services dispersed a sit-in by former Palestinian prisoners who demanded that the PA hand over their missing money. In January 2019, the PA decided to withhold the payments to 2,000 former prisoners belonging to Hamas and Islamic Jihad for no apparent reason.

Azzam al-Ahmad, a member of Fatah's Central Committee and the PLO's Executive Committee, told the Voice of Palestine Radio on Nov. 26 that the delay was to be expected because Hamas wants to maintain division.

On the same day, Youssef Rizkah, former minister of information in Hamas’ government, told the local Felesteen newspaper that the delay was intended to show that Hamas believes the PA’s behavior toward the prisoners proves that the PA cannot be entrusted to manage the elections.

Hamas spokesman Hazem Qassem told Al-Monitor, “Hamas’ delayed announcement was in protest of the PA’s silencing of freed prisoners in the West Bank. Freedoms in the West Bank are at the core of the electoral process. The movement wanted an atmosphere conducive to public freedom before giving a positive response. Public freedoms are essential components of fair elections. Our response included the need for an agreement regarding the court empowered to rule on electoral details.”

Although Hamas only withheld its response for six hours, this brief period was sufficient to spark both support and condemnation.

Some Palestinians said Hamas’ reluctance benefitted Abbas, who is unexcited about Hamas’ participation. Had Hamas not declared its approval, Abbas would have been exempt from holding the elections in Gaza, and the vote would have been confined to the West Bank. In such a case, the results would have come in Abbas’ favor, and Hamas would have remained isolated from the Palestinian political scene.

Wasel Abu Youssef, a member of the PLO's Executive Committee, told Al-Monitor, “Hamas’ response was only pro-forma approval, and this is a positive thing, but it also set some legal and constitutional limitations capable of obstructing or postponing the elections.”

Abu Youssef said Hamas’ response required the establishment of an electoral court and the movement asked that the Constitutional Court, established in 2006, play no role of any kind. Hamas’ response also stressed that electoral lists must not be required to sign any political pledges and must be allowed to adopt the political programs they deem fit.

Abdullah Abdullah, a member of the Fatah Revolutionary Council, said on Nov. 27 that participation in the elections would require commitment to the PLO's political program.

A former member of the Fatah Central Committee told Al-Monitor on condition of anonymity, “Hamas’ multiple positions may confuse Abbas, who may not have been in favor of ​​elections had it not been for the international pressure he faced. Hamas’ approval does not necessarily mean that Abbas will soon issue a presidential decree about the election date, as he might decide to further hinder such elections out of fear of a repeat of Hamas' 2006 electoral victory.”

The Arabi 21 website revealed Nov. 27 that Abbas decided to hold the elections under international and regional pressure. The European Union asked him to hold them, the report added, in order to fill the constitutional vacuum left by his dissolution of the Palestinian Legislative Council in December 2018; and German Chancellor Angela Merkel also sent Abbas a letter urging him to hold elections.

Hussam al-Dajani, professor of political science at Al-Ummah University in Gaza, told Al-Monitor, “Several electoral scenarios could unfold right now. The elections could be held without Hamas, and this is a very likely scenario given Abbas’ expected rejection of Hamas’ response. They could also be held with the broad participation of Fatah and Hamas or with Hamas boycotting them, and the latter scenario would be a win for Abbas." A fourth possibility, he said, is that elections could fail altogether.

Hamas’ positive response is not the last step needed for elections to be held, and Hamas is concerned that Abbas might obstruct the movement’s participation despite Hamas offering concessions.

According to Hamas, when Abbas refused to hold the legislative and presidential elections simultaneously, the movement did not object, nor did it object when he insisted that the elections be held based on a proportional electoral system. These concessions, Hamas fears, might have whetted Abbas’ appetite for more.