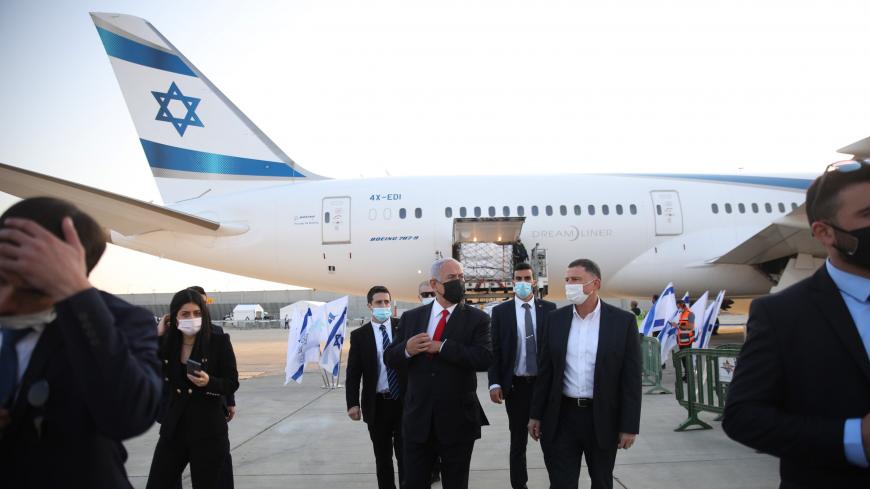 Israel's Prime Minister Benjamin Netanyahu (C-L) and Health Minister Yuli Edelstein (C-R) attend a ceremony for the arrival of a plane carrying a shipment of Pfizer-BioNTech coronavirus vaccine at Ben Gurion airport near Tel Aviv on Jan. 10, 2021. Although Israel has done a stellar job when it comes to the vaccine, the coronavirus still poses a major problem in the country and is preventing the prime minister from jet-setting around the Gulf to celebrate his normalization agreements with Arab countries. - MOTTI MILLROD/POOL/AFP via Getty Images

February was supposed to be the month in which Prime Minister Benjamin Netanyahu was going to launch a victory tour in the Gulf states, accompanied by an entourage of businessmen and journalists. It was supposed to celebrate a powerful campaign in the month before the fateful elections, and illustrate that the campaign theme that Netanyahu is a leader in a league of his own when compared with his numerous, small-time political rivals. This was to be accompanied by pictures of Netanyahu at poignant, historic ceremonies opening Israel’s new embassies in Bahrain and the United Arab Emirates.

However, his original plans to hop between Arab capitals are being shelved. Instead, Netanyahu will spend the coming weeks in Israel making efforts to halt the COVID-19 virus that hasn’t been vanquished despite the country's successful vaccination drive. The prime minister is savvy enough to know that during a domestic crisis, his place is in Israel and not making flamboyant, flashy visits when dozens of Israelis are dying every day from the coronavirus.

On Feb. 1, Netanyahu’s office announced that the scheduled three-day visit to the United Arab Emirates and Bahrain — which had already been postponed twice — has been dramatically shortened. Netanyahu will fly to Abu Dhabi only, for a lightning visit of only three hours. The historic Feb. 9 trip will include just one meeting — with Abu Dhabi's Crown Prince Mohammed bin Zayed. The official ceremonies for the opening of the embassies in the Emirates and in Bahrain will not be held. Or at least not in Netanyahu’s presence.

Still, Netanyahu hopes to profit from this short visit, which will take place only 24 hours after a court hearing regarding the prime minister’s trial. This way, Netanyahu will be able to deflect attention from discussion of the bribery charges against him to his great diplomatic coup.

But this will be only small consolation. President Donald Trump’s resounding defeat has meant that Netanyahu’s golden days in the White House are over. In the last two years during Netanyahu’s campaigns, Trump lavished him with expensive diplomatic gifts, such as the transfer of the US Embassy to Jerusalem and recognition of Israeli sovereignty over the Golan Heights. The apex was, of course, in September at the White House when Israel signed the establishment of diplomatic relations with the UAE and Bahrain.

The festive ceremonies, and the pictures of Trump, Netanyahu and foreign ministers — Emirati Abdullah bin Zayed and Bahraini Abdullatif al-Zayani — starred on the front pages of the world’s newspapers, and in Israel the imagery became a symbol of the diplomatic powers of the prime minister. It was his winning card vis-a-vis his numerous political rivals, who were forced to praise the prime minister for his historic process that changed the face of the entire region. There were also agreements with Sudan, Morocco and now also Kosovo that Netanyahu can brag about.

Nevertheless, due to bad luck, all these diplomatic achievements are being sidelined by the somber mood in Israel brought about by COVID-19 health issues and economic losses. The country is deep into its third lockdown, and people still don’t see positive effects of the recent mass vaccination process.

Then there is the changing diplomatic arena. In the recent past, Netanyahu could rely on Trump to give him a tailwind before elections. But now that President Joe Biden is in the White House, it is a totally different story.

Two weeks have passed since Biden was sworn in. Yet as of Tuesday morning (Israel time), Netanyahu had not been privileged to speak to the new American president on the phone. Meanwhile, it is reported that the new president has found time to talk with a long list of world leaders, including Canadian Prime Minister Justin Trudeau, British Prime Minister Boris Johnson, Mexican President Andres Manuel Lopez Obrador, German Chancellor Angela Merkel, French President Emmanuel Macron and Russian President Vladimir Putin. The Israeli media points the blame for this on the prime minister, and reminds the public that even President Barack Obama talked with Netanyahu in his first days in the White House.

To make things worse for Netanyahu, Foreign Minister Gabi Ashkenazi received a phone call from his US counterpart, Secretary of State Antony Blinken. Ashkenazi congratulated Blinken in his new position in the Biden administration. The two of them discussed strategic regional topics, the continuation of broadening the circle of peace, the Iranian threat and additional topics.

The current interpretation of all this is that Biden’s White House is letting Netanyahu “sweat” and is in no hurry to help him in his election campaign. The reasons, of course, involve residual resentments from the remote past and the not-so-remote past, including Netanyahu’s complicated relationships with Obama and his then-Vice President Biden.

To that we add Netanyahu’s special relationship with Trump, enemy of Biden. Netanyahu had felt at home in Trump’s White House, and had much influence in molding Trump’s policy in the Middle East. The people in the new administration certainly have not forgotten how Netanyahu delayed in congratulating Biden for his victory in the Nov. 3 election. Although Biden was announced as the electoral college winner Nov. 7, Netanyahu waited 12 hours to send his blessings — on Nov. 8 — much later than most leaders, and at the beginning avoided calling Biden “president-elect.” Meanwhile, a picture of Netanyahu standing next to one of Trump decorates the first page of Netanyahu’s Twitter account.

Now everything has changed. Foremost is the controversy regarding a return to the nuclear agreement with Iran. The Biden administration has espoused a policy diametrically opposed to Israel's stance and to Netanyahu’s doctrine in the last decade. The unequivocal statement of Israel Defense Forces Chief of Staff Aviv Kochavi last week against a return to the nuclear agreement irritated quite a number of people in Washington.

Israel has a saying that every weekend has its Sunday night. In other words, every celebration is followed by the bill. The golden age of Netanyahu and Trump is over and is being replaced by diplomatic relations that are much more official, even cold. Until Trump’s departure from the White House, he had been Netanyahu’s lucky charm or X-factor with the Israeli public. This public learned to admire, even love the American president who went out of his way to embrace Israel.

Now Netanyahu faces his Sunday night, in a period when he desperately needs a Trump-style diplomatic embrace or diplomatic gift. Instead, cold winds now blow his way from Washington.