Israel and Kosovo ae probably the first two countries in the world to establish diplomatic relations in a virtual Zoom ceremony. 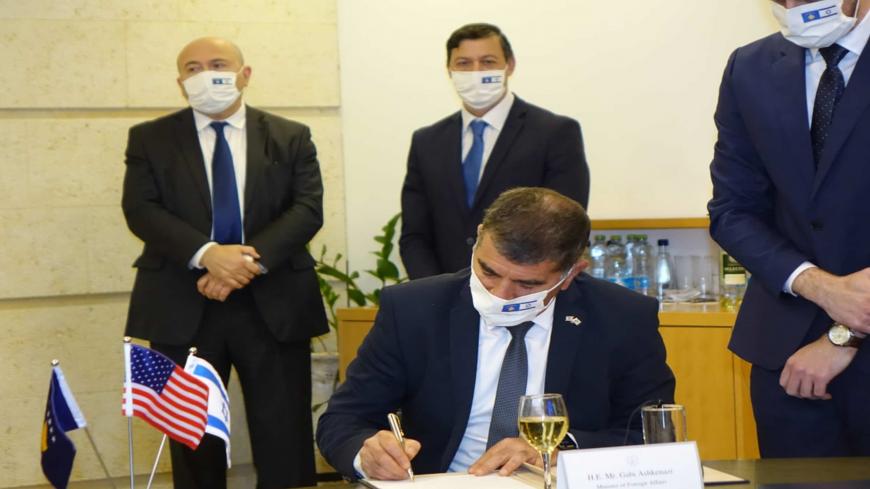 Israel and Kosovo officially established diplomatic relations Feb. 1. With Israel under nationwide lockdown and Ben Gurion Airport closed, Kosovar Foreign Minister Meliza Haradinaj-Stublla could not come to Israel for the ceremony, meet with Foreign Minister Gabi Ashkenazi and inaugurate Kosovo’s embassy in Israel as was originally planned. Thus, the two ministers held a virtual ceremony on Zoom, which was also broadcast on the Foreign Ministry’s Facebook page.

Also present at the virtual ceremony were US Ambassador to Kosovo Philip Kosnett, US charge d’affaires in Israel Jonathan Shrier and US Deputy Assistant Secretary (State Department representative to the Balkan region) Matthew Palmer.

During the ceremony, each of the ministers signed three cooperation agreements. The first agreement — the joint communique — established bilateral diplomatic relations, and was signed in four languages: Hebrew, English, Albanian and Serbian. Another agreement established a framework for consultation between the two ministries, and a third one framed cooperation activities of Israel’s international development agency Mashav. After signing the agreements, the ministers sent to each other the signed copies via email for ratification.

Speaking at the ceremony, Ashkenazi said, “The establishment of relations between Israel and Kosovo is an important and moving historical step that reflects the many changes the region has experienced in recent months. Today, Kosovo officially joins the circle of countries that aspire to peace and stability and recognize Israel, and Jerusalem as its capital.”

Haradinaj-Stublla paid tribute to the Jewish community in Kosovo, stating that both peoples have known hardships on the way to independence. Haradinaj-Stublla added, "Today, Israel is becoming the 117th country to recognize the Republic of Kosovo as an independent and sovereign country."

The decision on mutual recognition between Muslim-majority Kosovo and Israel was achieved last September, during a White House summit of Kosovo-Serbia leaders, and in the presence of then-President Donald Trump. Both countries have hesitated in recent years over mutual recognition and establishment of ties. Kosovo was hesitant because of its Muslim majority. Israel was reluctant to recognize Kosovo’s unilateral declaration of statehood, fearing such a recognition could create a precedent to be followed by the Palestinians.

Foreign Ministry’s media office told Al-Monitor that Israel intends to appoint a nonresident ambassador to Pristina, but no decision has been taken yet on who will represent Israel in Kosovo.