The Muslim-majority country opened an embassy in the contested city after Israel recognized its independence from Serbia. 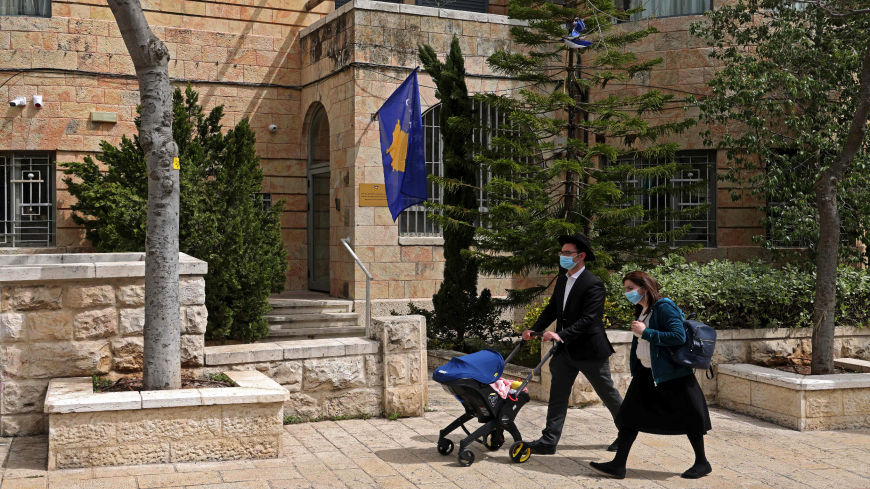 People walk by the Kosovo Embassy moments before an official ceremony for the opening of the embassy in Jerusalem on March 15, 2021. Kosovo officially opened its embassy in Jerusalem, becoming the first Muslim-majority territory to recognize the city as Israel's capital. - EMMANUEL DUNAND/AFP via Getty Images

“The pledge given in the Oval Office today is finally fulfilled,” Kosovo’s Foreign Ministry tweeted in reference to former President Donald Trump’s role in forging relations between the two countries.

Ines Demiri, Kosovo's charge d'affaires in Israel, opened the facility in what she called “a truly proud and historic moment” for Kosovo-Israel relations. Israel’s Foreign Ministry said it “warmly welcomed” the opening of Kosovo’s embassy and the “natural development of the relations and a realization of the Washington agreement.”

The embassy’s opening came in exchange for Israel’s recognition of Kosovo, which declared independence from Serbia in 2008. Serbia still sees Kosovo as its province, but the United States and most Western countries view Kosovo as its own country.

During a White House signing ceremony in September, the two Balkan states agreed to establish economic ties, and Serbia also pledged to move its embassy to Jerusalem by July 2021.

Kosovo on Sunday became the first European country and first Muslim-majority country to open an embassy in Jerusalem. Trump formally recognized the city as Israel’s capital in December 2017, and months later the US Embassy was moved from Tel Aviv to Jerusalem. Shortly after, Guatemala became the second country to relocate its embassy.

Jerusalem is sacred to Judaism, Islam and Christianity. The Palestinians want East Jerusalem, which Israel captured in the 1967 Six-Day War, as the capital of their future independent state. Israel views the disputed city as its "undivided capital."

The Biden administration has restored relations with the Palestinians but does not plan to move the US Embassy back to Tel Aviv. Biden also plans to build on the Abraham Accords, which saw a number of Arab countries normalize relations with the Jewish state.