Serbia plans to move its embassy from Tel Aviv to Jerusalem next year, and Kosovo also has agreed to open an embassy in the holy city. 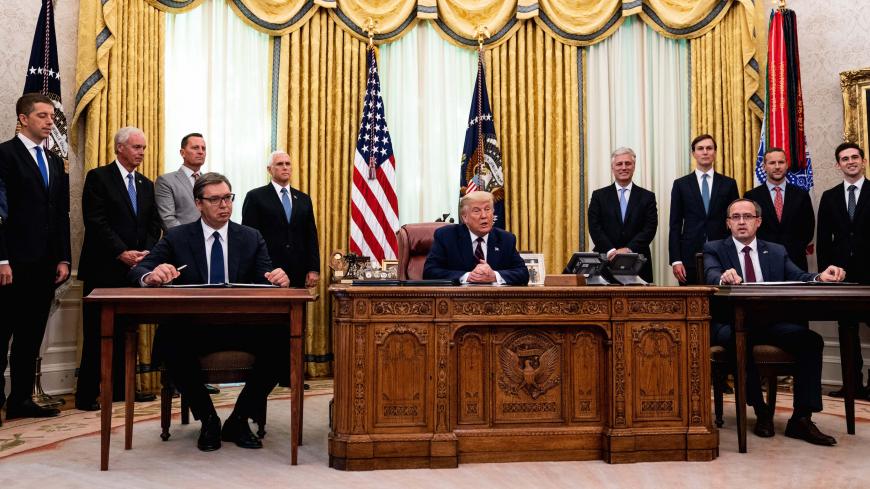 US President Donald Trump (C) participates in a signing ceremony and meeting with Serbian President Aleksandar Vucic (L) and Kosovo Prime Minister Avdullah Hoti (R) in the Oval Office of the White House on Sept. 4, 2020, in Washington. - Anna Moneymaker-Pool/Getty Images

Serbia and Kosovo will open embassies in Jerusalem as part of talks brokered by the Donald Trump administration, with the predominantly Muslim Kosovo also agreeing to normalize ties with the Jewish state.

Israeli Prime Minister Benjamin Netanyahu welcomed the news today and said his country will establish diplomatic relations with Kosovo — whose 2008 declaration of independence from Serbia still has not been recognized by Serbia, which sees Kosovo as its province.

“Kosovo will be the first country with a Muslim majority to open an embassy in Jerusalem,” Netanyahu said. “As I’ve said in recent days — the circle of peace and recognition of Israel is expanding and more countries are expected to join.”

Serbia would become the first European country to transfer its embassy from Tel Aviv to Jerusalem, promising to do so by July 2021.

"I thank my friend the President of Serbia Aleksandar Vucic ... for the decision to recognize Jerusalem as the capital of Israel and move his country's embassy to it," Netanyahu said.

Trump formally recognized Jerusalem as Israel’s capital in December 2017, and months later the US Embassy was moved to the fiercely contested city. Shortly after, Guatemala became the second country to relocate its embassy.

Jerusalem is sacred to Judaism, Islam and Christianity. The Palestinians want East Jerusalem, which Israel captured in the 1967 Middle East war, as the capital of their future independent state. Israel views the disputed city as its "undivided capital."

Today, the leaders of Serbia and Kosovo signed what President Donald Trump described as an “economic normalization” between the former foes. A statement from the White House said the two Balkan entities “were able to reach a real breakthrough on economic cooperation across a broad range of issues.”

“It took decades because you didn’t have anybody trying to get it done,” Trump said. “There was a lot of fighting and now there’s a lot of love.”

It's the latest diplomatic win for the president ahead of the November elections. Last month, the United Arab Emirates and Israel agreed to normalize ties in a historic agreement brokered by the White House.

Under the deal, Israel agreed to pause its planned annexation of large portions of the West Bank in exchange for cooperation with the UAE on a range of issues. Bahrain, Oman and Sudan have been floated as countries that could be persuaded to follow the UAE’s lead in recognizing Israel.