Honduras to move Israel embassy to Jerusalem by year's end 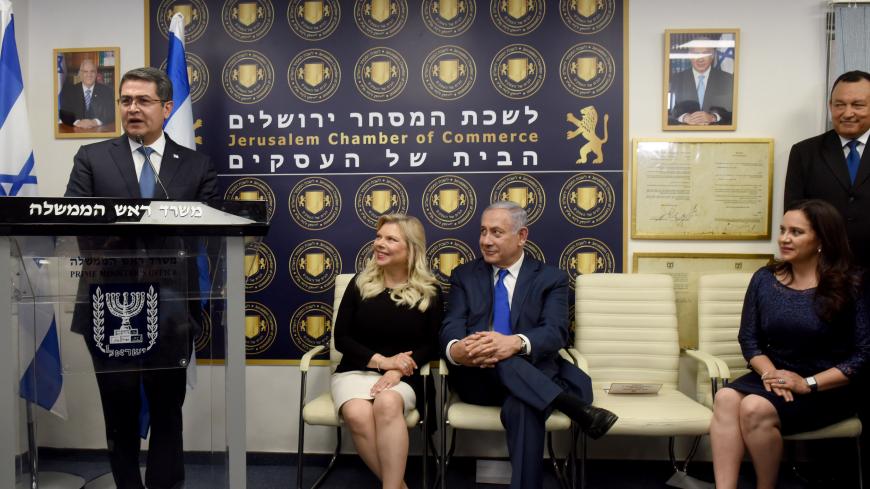 Honduras plans to relocate its embassy in Israel from Tel Aviv to Jerusalem by the end of 2020, said President Juan Orlando Hernandez following a phone call with Israeli Prime Minister Benjamin Netanyahu on Sunday.

"I have just talked to Prime Minister Netanyahu to strengthen our strategic alliance. We spoke to arrange the opening of the embassies in Tegucigalpa and Jerusalem, respectively," Hernandez tweeted Sunday. “We hope to take this historic step before the end of the year, as long as the pandemic allows it,” he added.

Israel doesn’t have an embassy in the Central American nation but opened a diplomatic office in Tegucigalpa last month.

“I look forward to working with you to strengthen the friendship between Israel and Honduras and to the opening of your embassy in Jerusalem and ours in Tegucigalpa,” Netanyahu tweeted Monday.

The move is notable given Honduras’ Palestinian population, the second largest in Latin America after Chile. The country recognized Palestine in 2011 and established diplomatic ties in 2013.

But in a blow to the Palestinians, Honduras was one of just nine countries to vote against a United Nations resolution in December 2017 asking member states not to relocate their diplomatic missions to Jerusalem.

The vote came as US President Donald Trump formally recognized Israel’s capital as Jerusalem. In May 2018, the US Embassy was moved, and days later, Guatemala became the second country to relocate its embassy to the fiercely contested city.

In August 2019, Hernandez recognized Israel’s capital as Jerusalem and Honduras opened a commercial office in the city the following month that served as an extension of the embassy in Tel Aviv.

Jerusalem is sacred to Judaism, Islam and Christianity. The Palestinians want east Jerusalem, which Israel captured in the 1967 war, as the capital of their future independent state. Israel views the disputed city as its "undivided capital."

Earlier this month, Serbia and Kosovo announced they will open embassies in Jerusalem as part of talks brokered by the White House. Last week, Bahrain and the United Arab Emirates formalized normalization agreements with Israel during a signing ceremony in Washington.