In a first such event under the Bennett government, Honduran President Juan Orlando Hernandez has inaugurated his country’s new embassy in Jerusalem. 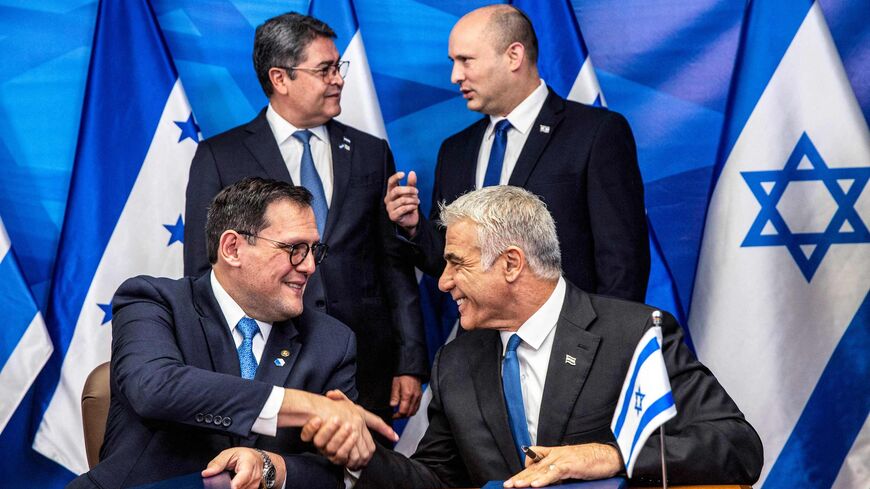 Honduran President Juan Orlando Hernandez and new Prime Minister Naftali Bennett inaugurated Honduras' new embassy in Jerusalem June 24. “The Jewish people have a long memory, and you will be written in the pages of history as someone who took a courageous action and the right action for the State of Israel. Thank you,” said Bennett. In a tweet later, Bennett welcomed Hernandez “to our eternal capital.’’

Bennett thanked Hernandez for consistently supporting Israel in international organizations “even when it is not always popular and even when it has a cost." He said, "That is a sign of friendship: the willingness to take action even when it has a price. I want to thank you and the public in Honduras for this support. We saw it recently in Operation Guardian of the Walls, when the Hamas terrorist organization shot thousands of rockets at Israeli civilians while cynically using the Gaza population — women, children and adults — as human shields."

Israel now plans to open an embassy in the Honduran capital of Tegucigalpa.

During the ceremony, Foreign Minister Yair Lapid and his Honduran counterpart Lisandro Rosales signed memoranda of understanding relating to health, agriculture, water management, education, information sharing, development and innovation. After the ceremony, Lapid tweeted, “I congratulated the President of Honduras, Juan Orlando Hernandez, on the inauguration of the embassy today in Jerusalem, Israel’s capital. The opening of the embassy in Jerusalem is further proof of the warm and good relations that the State of Israel and the Honduran people share. I thank you, the President of Honduras, for your efforts to strengthen the ties between our countries and peoples.’’

Honduras is the fourth country to open an embassy in Jerusalem. The United States under President Donald Trump relocated its embassy from Tel Aviv to Jerusalem in May 2018, and was followed by Guatemala and Kosovo. In the past year, Serbia, the Dominican Republic and Malawi said they would also open embassies in Jerusalem, though none of them have done so yet. Last February, Prime Minister Benjamin Netanyahu’s office said he had spoken on the phone with Equatorial Guinea President Teodoro Mbasogo, who informed him that he would transfer Equatorial Guinea's embassy to Jerusalem. The government of Equatorial Guinea did not confirm this information. The Czech Republic and Hungary have each opened diplomatic offices in Jerusalem while keeping their embassies in the Tel Aviv area. Several countries, including Brazil and Colombia, have opened trade or cultural offices in the capital, in what is seen by Israel as first steps toward their embassies' future relocation.

The opening of the Honduras embassy in Jerusalem is the first such event to take place under the Bennett government and after Trump left office. Foreign Ministry officials said the move was probably not related to the change of governments in Israel. Hernandez has long been a strong supporter of Israel and has been committed to opening an embassy in Jerusalem for some time. He had participated in 1991 in Israel's international leadership development program at the International Institute-Histadrut and visited again as honorary guest of Mashav, Israel's agency for international development cooperation.