Haifa Mayor Einat Kalisch-Rotem has put the challenges of climate change and sustainable development at the forefront of her agenda. 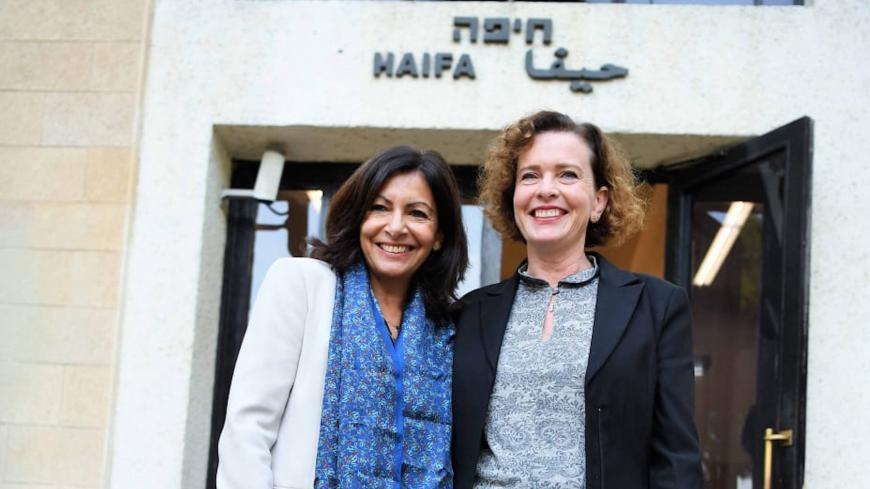 Haifa became the first Israeli city to independently sign the Paris climate agreement Feb. 8. Haifa municipality stated on Facebook, “Haifa recognizes the urgency of taking action to limit the rise in temperature and examine decisions from an environmental point of view.’’ Haifa Mayor Einat Kalisch-Rotem was quoted as saying, "I believe that on the environmental issue, cities have the power to lead change, without waiting for it to come from the central government.’’

Haifa is not the only Israeli city to publicly take on climate and environmental challenges. Last August, the Tel Aviv-Yafo municipality presented a climate action plan to cope with the threats of climate change. The plan was developed as part of Tel Aviv’s partnership with the C40 Cities Climate Leadership Group, an international network of cities fighting global warming.

The Arab city of Taibeh is a member of another action network called ClimaMed, which brings together cities in the southern Mediterranean basin. With the support of ClimaMed, Taibeh is advancing an ambitious plan to rehabilitate the East Taibeh waste site.

Other Israeli cities have taken action against climate change and other environmental concerns, but Haifa's is a special story about two assertive and environmentally minded female mayors.

Kalisch-Rotem has lived in Haifa practically all her life, apart from doctoral studies in Switzerland. A graduate of the Israel Technology Institute in architecture and urban design, she established her own architecture office in her hometown. She then engaged in activism and in politics, becoming a member of the city council. In 2018, she ran in the local mayoral elections against Haifa Mayor Yona Yahav and won, opening a new era for the third largest city in Israel.

As an architect and urban planner, environmental issues are central to Kalisch-Rotem's work. Shortly after taking office as mayor, she hosted the mayor of Paris, Anne Hidalgo, in Haifa. Clearly, the two women shared much in common, including concerns for the environment and the desire to turn their respective cities greener.

The two mayors kept in contact. Last December, Kalisch-Rotem participated in a Zoom conference hosted by Hidalgo. The Forum Zero Carbonne, which unites international climate change actors, marked five years since the 2015 Paris climate agreement. The conference hosted mayors, decision-makers and activists including French President Emmanuel Macron. Kalisch-Rotem was invited to participate in a panel on biodiversity and nature-based solutions.

The Haifa municipality explained joining the climate agreement as “a continuation of a conference attended by the mayor in December 2020 in Paris, to which she was invited by the mayor of Paris, Anne Hidalgo, to form a coalition of cities to sign a commitment to climate protection.’’

The communiqué noted that in signing the agreement, the mayor recognized the state of emergency resulting from the global climate crisis and placed climate considerations at the center of the decision-making process on urban development. “The issue of environmental protection and the protection of the planet is part of the agenda, which the mayor has been leading since she was elected to the position and she is and will continue working to promote it.’’

A saying goes in Israel that in Jerusalem people pray, in Tel Aviv people play and in Haifa people work. Haifa Bay is home to heavy industry, the country’s main petroleum refinery and several chemical processing plants. The Port of Haifa not only serves passenger traffic, but is also a major cargo port. Israel’s largest industrial park is located at the southern entrance to the city, hosting manufacturing and research facilities for many international and Israeli tech companies such as Apple, Amazon, IBM, Microsoft, Amdocs and Google. Higher up the slopes sit Haifa university and the Israel Technology Institute. Haifa's geography, with both mountain and seashore, generates a lot of car traffic. Unlike Tel Aviv, bikes are uncommon and foot traffic is rare in some parts of the city.

All these factors represent major environmental challenges and the Haifa municipality has already stepped up. Together with 11 other municipalities and regional councils, it was invited to join a national accelerator on climate change and sustainable energy.

On Dec. 12, Energy Minister Yuval Steinitz hosted the first online conference for the participants of the national accelerator. The ministry explained that the participating local authorities will start with extensive research. Then consultants will assist them in formulating action plans to help them prepare for climate change and reduce emissions while aiming for 30% renewable energy production by 2030, in line with the ministry's vision.

The panoply of solutions includes an array of tools such as installing solar panels on public buildings and private households, streamlining energy in urban infrastructure, shading streets, setting up charging stations for electric vehicles and planting trees. After the initial analysis is completed, Haifa and the other municipal councils will have a year to formulate an action plan. Kalisch-Rotem and her team welcome the challenge.