Christians in Haifa demanded that the McJesus sculpture be removed from the Haifa Museum of Art, but they certainly did not ask for provocative Culture Minister Miri Regev to intervene. 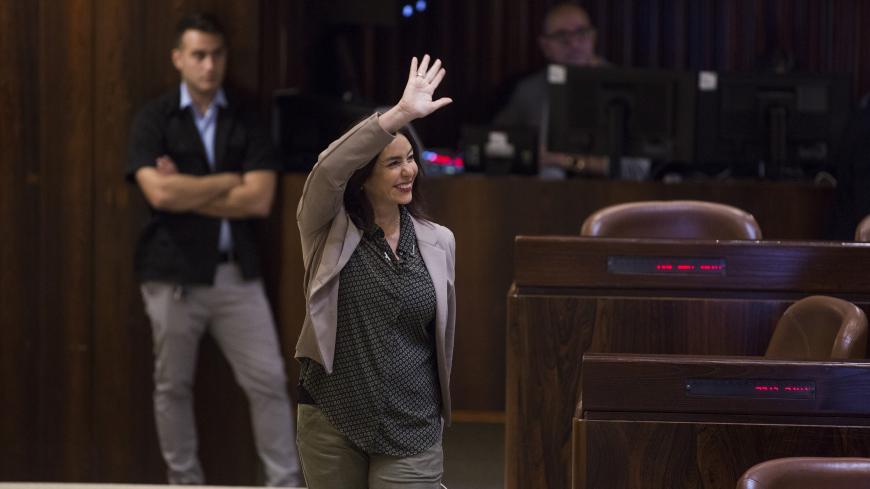 Israel's Minister of Culture and Sports Miri Regev waves during a discussion to vote on the dissolution of the Israeli parliament in the Knesset, Israel, Dec. 26, 2018. - Lior Mizrahi/Getty Images

Once again, Minister of Culture and Sports Miri Regev made a big threat. Once again, she was blocked. On Jan. 10, Regev demanded that the general manager of the Haifa Museum of Art remove the McJesus sculpture, featured in an exhibition titled “Sacred Commodities.” According to Regev, “The cheapening of symbols sacred to the different religions and their many believers around the world by using them in an act of artistic protest has no legitimacy and cannot serve as a work of art in a cultural institution supported with state funds.” What Regev was actually insinuating was that if the piece was not removed, the budgetary sword wielded by her office could very well be raised. But then Deputy Attorney General Dina Zilber informed her that she may not deny the museum support from her ministry, solely because of the work’s content.

The artwork in question was created by Finnish artist Jani Leinonen. It depicts Ronald McDonald, the iconic clown of the McDonald restaurant chain, in the position of a crucified Jesus. The artist was attempting to challenge consumer culture and the infatuation with predatory capitalism, which he believes has reached a level of genuine religious adulation. The Haifa Museum of Art borrowed the piece from a gallery in Finland, and it has been on display since August 2018. But it is only now, one month before the end of the exhibition, that it actually caused an uproar. It happened after a photo of the sculpture was shared tens of thousands of times on social media. Apparently, when it was exhibited at the Finnish gallery, no one considered Leinonen’s work to be particularly controversial or groundbreaking. In Israel, however, any attempt to use religious symbols in art could be interpreted as sacrilege. And, in fact, it was by Haifa’s Christian community.

On Friday, Jan. 11, some 200 people demonstrated outside the Haifa Museum of Art, calling for the work’s removal. The demonstration turned violent, with someone throwing a Molotov cocktail at the building and others pelting policemen with rocks. Three policemen sustained minor head injuries when they pushed back demonstrators who tried to force their way into the museum. In a rare occurrence, the religious protest in Haifa succeeded in bringing the heads of the city’s Greek Catholic and Greek Orthodox churches together. They filed a joint petition with the Haifa District Court, asking that it ban the display of the McJesus piece and one other work. “Exhibiting these works is a crude assault against the Christian religion and a serious insult to the faith. As such, it is not covered by the definition of freedom of expression as allowed by Israeli law,” the petition argued.

Surprised by the violent outburst, the museum’s management placed a black curtain over the entrance to the exhibition space, to keep anyone who might be offended by the work from being exposed to it. The curtain was removed once it became clear that it did nothing to calm the mood. As a result of the unrest, the artist himself demanded that his work be removed, claiming that he was coming under pressure from the boycott, divestment and sanctions movement.

The Christian protests in Haifa raise the sensitive and complicated issue of the problems that arise when freedom of expression offends or contradicts the religious or national sensitivities of the collective. “We are Christians, and we are also part of a traditional Arab society where freedom of expression is relative,” Wadia Abu Nasser, adviser to the Assembly of Catholic Bishops in the Holy Land, told Al-Monitor. “If this exhibition would have taken place in Europe 50 years ago, they would have hanged the artist. Every society needs to develop at its own pace. It is quite possible that in another 50 years, no one would care.”

Abu Nasser said that he asked the staff of the museum in Haifa whether they would dare to exhibit a piece of art that offends other believers, such as Muslims. He never got an answer, even though it is a legitimate question. This is particularly true given the reaction to the cartoons of the Prophet Muhammad published by Danish magazine Jyllands-Posten in 2005 and by French magazine Charlie Hebdo in its February 2006 and November 2011 issues. The Charlie Hebdo office in Paris was attacked on Jan. 7, 2015, and 12 staff members were killed.

The heads of the various churches have been engaged in negotiations with the new mayor of Haifa, Einat Kalisch-Rotem, over the past few days, in an effort to bring about the removal of Leinonen’s piece. These negotiations led to favorable results, at least as far as the churches were concerned. On Jan. 16, Kalisch-Rotem announced that in consideration of the sensitivities of the Christian community, she decided to remove the works from the exhibition.

Even before the mayor got involved in the issue, the museum’s management decided not to respond publicly to Regev’s demand. At first, the management could not understand why Regev would intervene in the matter, when it would not earn her any points among Jewish right-wing voters. The work is not offensive to state symbols, nor does it violate the “Nakba Law” (against art and culture works featuring the 1948 Palestinian Nakba), which allows the state to deny funding under certain circumstances.

A source in the Haifa municipality, who spoke with Al-Monitor on condition of anonymity, said that Regev did what she did to hurt Haifa, because its mayor is identified with the Labor Party. In other words, it’s all about politics; it’s the Likud versus the Labor Party in the name of art and culture.

On Jan. 11, Regev was interviewed by Channel 10 at the Likud’s Leumiada happening in Eilat, where she was received warmly by members of the party’s Central Committee. A slip of the tongue during that interview is, perhaps, the greatest evidence of how turbulent her term in the Ministry of Culture and Sports has been. “I was behind some incredible revolutions, and I think that even two ministers after me will not be enough to fix everything I did,” she said.

Regev was, in fact, blocked in Haifa. When there are no “leftists” or Arabs in the picture, no one bothers to support her threats to deny institutions financial assistance. One thing that the staff of the Haifa municipality and the heads of the churches agree on is that they would prefer if Regev and her ministry stayed out of their city. The last thing they need is another “crisis” manufactured by the minister, who has already turned her ministry into a devastating political weapon.