US Secretary of State Antony Blinken appeared to question the previous administration's controversial decision to recognize Israeli sovereignty over the Golan Heights. 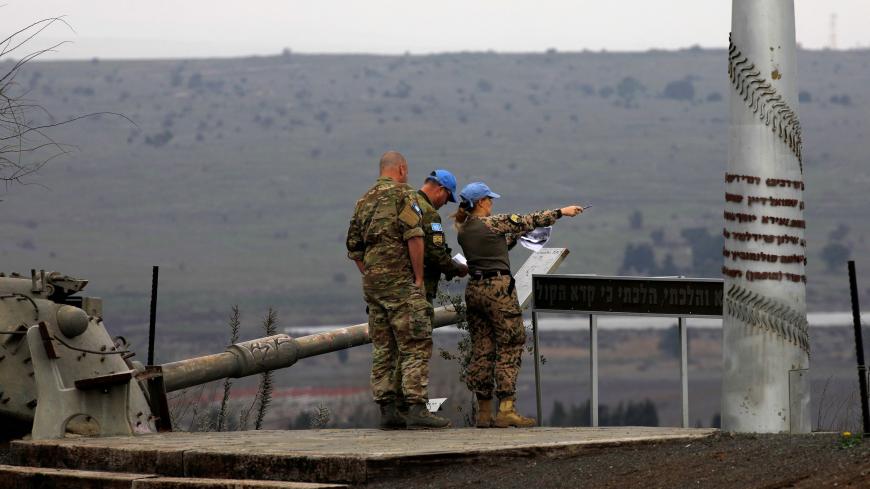 Members of the United Nations Disengagement Observer Force stand near an old Israeli tank as they look toward the Syrian governorate of Quneitra from the Israeli-annexed Golan Heights on Feb. 4, 2021. - JALAA MAREY/AFP via Getty Images

The Golan Heights will stay “forever a part of the State of Israel,” Prime Minister Benjamin Netanyahu’s office said Tuesday in response to recent comments from US Secretary of State Antony Blinken.

During a CNN interview, Blinken said on Monday that if the situation in Syria were to change, the administration would “look at” the Donald Trump administration's controversial decision to recognize Israeli sovereignty over the Golan Heights.

“As a practical matter, the control of the Golan in that situation I think remains of real importance to Israel’s security,” Blinken told CNN. “Legal questions are something else and over time if the situation were to change in Syria, that’s something we look at, but we are nowhere near that.”

Israel captured most of the Golan Heights from Syria in the 1967 war. The country annexed the mountainous plateau in 1981, in a move Israel defends as necessary for its security.

“Look, leaving aside the legalities of that question, as a practical matter, the Golan is very important to Israel’s security,” Blinken said, adding that Syrian President Bashar al-Assad and Iranian militias loyal to him pose a “significant threat to Israel.”

In 2019 Trump broke with decades of US policy by signing a proclamation officially recognizing the Golan Heights as Israeli, in a move slammed by Syria as “a blatant attack” on its sovereignty. The United States became the first country, after Israel, to recognize Israel’s claim over the Golan Heights.

Shortly after Trump’s announcement, the Israeli government rewarded the US president by naming a new settlement in the northern Golan Heights Ramat Trump, or Trump Heights.

Responding to Blinken’s comments, Netanyahu said on Tuesday that the Golan will always remain a part of Israel.

“With an agreement, without an agreement, we are not coming down from the Golan. It will remain a sovereign part of the State of Israel,” the Jerusalem Post quoted him as saying during a visit to a health center near Nazareth.

The Golan Heights recognition was among a number of Trump administration moves seen as favoring Israel in its decades-long conflict with the Palestinians. In a decision widely condemned by US allies, Trump formally recognized Israel’s capital as Jerusalem in 2017, and months later, moved the US Embassy from Tel Aviv to Jerusalem.

In the final months of his presidency, the administration ended restrictions on using US taxpayer funding for scientific research projects conducted in Israeli settlements in the West Bank. Secretary of State Mike Pompeo also announced that American citizens born in Jerusalem could begin listing “Israel” as their place of birth on their passports.

President Joe Biden is expected to roll back a number of Trump-era actions in the region and bring US policy on the Palestinian-Israeli conflict more in line with those of previous administrations. Although Biden plans to restore US humanitarian aid to the Palestinians and resume relations with Ramallah, the US Embassy will remain in Jerusalem.

“The hard truth is we are a long way, I think, from seeing peace break out and seeing a final resolution of the problems between Israel and the Palestinians and the creation of a Palestinian state,” Blinken told CNN, adding that Biden supports a two-state solution.

America's top diplomat also dismissed concerns that Biden hasn’t spoken with Netanyahu since taking office. Blinken pointed out that the two leaders spoke during the transition and that he has held multiple conversations with his Israeli counterparts.

“I’m sure that they’ll have occasion to speak in the near future,” Blinken said.