More than six years after the massacre, before their burial in Sinjar on Feb. 4, Iraqis held a funeral for Yazidis who were murdered en masse by the Islamic State in 2014. 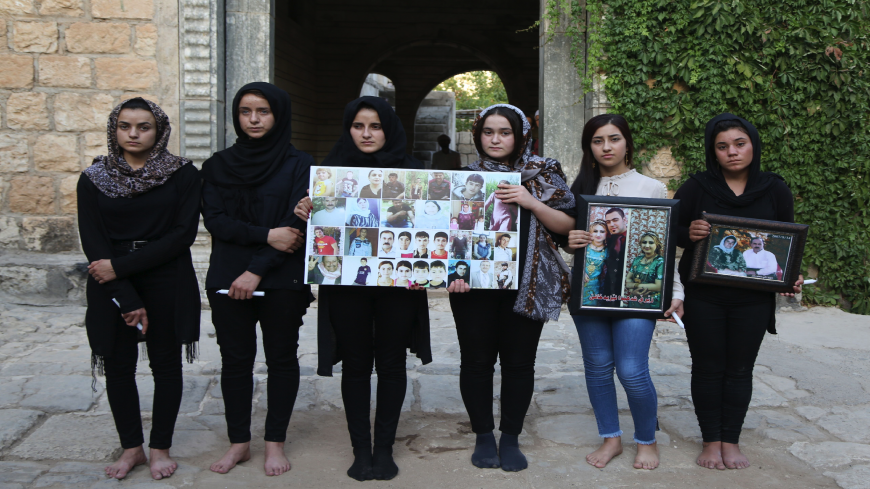 Yazidi Ashwaq Haji (1st-L), used by the Islamic State group (IS) as a sex slave, stands for a photograph in tribute to Yazidi victims from her village of Kocho near Sinjar along with their relatives, as she visits the Lalish temple in Lalish, northern Iraq, on Aug. 15, 2018. - 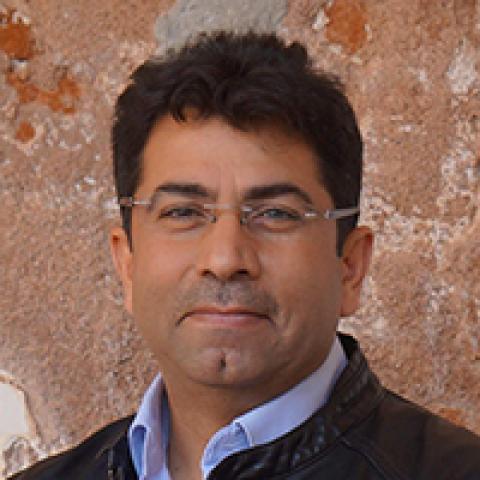 An official funeral ceremony was held today in Baghdad's Celebration Square to bid farewell to the remains of 104 Yazidi genocide victims killed by the Islamic State (IS) in August 2014.

The remains were excavated from some of the more than 80 mass graves in Sinjar, of which only a few have been opened. DNA tests to identify the victims were conducted by the Iraqi Medico-Legal Department of the Martyrs Foundation, in cooperation with the International Commission on Missing Persons and the United Nations Investigative Team to Promote Accountability for Crimes Committed by Da'esh/ISIL (IS). The coffins will be transported by air to Sinjar, where a burial ceremony will take place according to Yazidi rituals on Feb. 6 in the presence of a large throng of the public as well as social, religious and secular figures. Local and international institutions will provide psychological support to the victims‘ families throughout the memorial service, which spans seven days in accordance with Yazidi traditions.

Iraqi President Barham Salih and Prime Minister Mustafa al-Kadhimi attended the official ceremony in Baghdad, as did governmental and international figures, diplomats, activists, Iraqi citizens, and a number of the victims' families and their representatives. The remains will be moved to where the massacre occurred, namely Kocho village in Sinjar, where they will be buried in the presence of local and international officials and the media.

The majority of this first set of victims hailed from Kocho, whose entire male population was killed and whose women and children were captured. On Aug. 15, 2014, IS massacred more than 400 men and threw them in four mass graves around the village. The next day, they killed more than 80 elderly women and threw their bodies in what is now known as "the mothers’ grave," south of the city of Sinjar. Also, more than 1,000 women, girls and children were taken captive and sold in slave markets in Mosul, Raqqa and Tal Afar.

Official statistics indicate that IS's attack on Yazidis in Sinjar displaced more than 350,000 civilians and killed and captured more than 10,000 unarmed civilians. This is while the fate of nearly 2,880 captivated women and children is still unknown. The war totally destroyed the neglected city of Sinjar, which is located on the Iraqi-Syrian border. More than 70% of its people cannot return home due to the lack of services and insecurity, and because it turned into a regional conflict arena in the absence of a unified administration.

A number of Yazidi cultural, social and elite figures issued a memorandum regarding the Yazidi community’s concerns about the mechanisms agreed upon between Erbil and Baghdad. Based on that, the federal government has been tightening its grip on the security situation and the rule of law in the past months, so as to urge citizens to return to their areas.

Although more than three years have passed since the district was liberated from IS, many Yazidis continue to live in the refugee camps in the district under poor humanitarian conditions.

The Iraqi parliament has had its second discussion of a Yazidi survivors' draft law that, when passed, will compensate Yazidi women who were enslaved by IS. Lawmakers are planning to vote on the bill in the next few days. The draft was sent to parliament in 2019 by the Iraqi president and officially confirmed by the Council of Ministers, but disputes over the status of the children born of rape during war were the reason for the delay.

Multiple problems hinder the Yazidis' return, including the urgent need to rebuild their houses and villages first and ensure that services such as electricity and water are available. Also, there is a humanitarian and emotional aspect that makes it difficult for survivors and families to return, particularly since their relatives were massacred in or kidnapped from these houses and areas.

Moreover, the fact that a number of local and regional conflicting forces are present there has made the district an unsafe place in general, particularly with occasional Turkish shelling in light of the presence of the Kurdistan Workers Party.

Successful implementation of the abovementioned Sinjar agreement between Baghdad and Erbil will hopefully push all these forces out and calm the situation so that Baghdad, Erbil and international organizations can provide functioning services to the people.

Yazidis consist of an ethnic group present in Iraq, Syria, Turkey and some post-Soviet Union states. There are relatively large Yazidi communities in Germany, the European Union, the United States and Canada. Yazidism is a monotheistic religion, and its followers believe in one God; its holiest temple, Lalish, is located in the Kurdistan Region of Iraq. It is a closed, non-missionary community, amounting to nearly a million people worldwide. Nearly 72 genocides have been committed against Yazidis throughout history, all due to their religious affiliation.

While many of the mass graves in Sinjar remain unopened, the residents are waiting for the government and the UN investigation team to complete the process so that they are able to bury the victims in their own graves.