Officials have found nearly 70 mass graves of Yazidis slaughtered by the Islamic State in Iraq, and are working to create a memorial to the victims in cooperation with UNESCO. 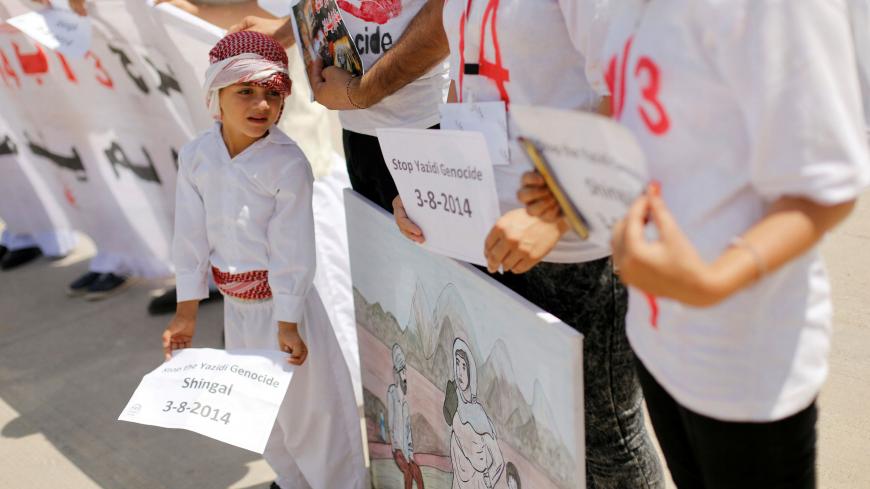 Yazidis attend a commemoration to mark three years since the Islamic State launched what the United Nations said was a genocidal campaign against them, Sinjar region, Iraq, Aug. 3, 2017. - REUTERS/Suhaib Salem

BAGHDAD — The Iraqi government and the United Nations are working together to establish a museum documenting Islamic State (IS) atrocities against the Yazidi religious minority in Sinjar.

The idea stemmed from a 2018 visit by representatives of UNESCO and the UN Assistance Mission for Iraq to the village of Kocho in the Sinjar district of Ninevah province. Residents had requested a memorial in the village. Their request was approved.

So far, at least 67 mass graves left behind by IS have been found in Sinjar, said Mohammed Taher al-Tamimi, Iraq's director of nongovernmental organizations at the General Secretariat of the Council of Ministers. He hopes to see the first Yazidi museum in contemporary history.

In cooperation with UNESCO's office for Iraq, Tamimi's department organized a Feb. 18 meeting of experts in Baghdad. The meeting was designed to “ponder with the experts, and international and domestic stakeholders, a systematic approach to decide on an adequate concept for the Yazidi memorial monument." The group studied memorials built in various countries as examples.

Majid Mohammed Amin, who represented the Ministry of Education at the meeting, tldo Al-Monitor, “We went to the Kocho school site, heard the survivors’ testimonies and viewed the marks of the radical organization’s atrocities. It was agreed that the Kocho school, where the crime started, will accommodate the museum. This is why the school building needs to remain, as much as possible, as it is, and the traces of crimes need to be preserved on the walls and other places."

He explained, “The school will serve as the genocide museum center, and other complementary monuments will be built as well, such as a shrine that is in line with the Yazidi architectural specifications. Its design, however, is yet to be completed.”

The mass graves that were found in Kocho and other parts of Sinjar won't be abandoned after the victims’ remains are excavated, according to village spokesman Sheikh Nayef Jassem Qassem. He told Al-Monitor, “In my capacity as tribal leader of the village, I take upon my own shoulders" to mark the graves' boundaries and install memorial shrines at each one. "This way, the visitors will not only come to see the school that is planned to serve as the museum center, but will also stop at the mass graves, and this will help them develop a complete picture of the crime scene.”

“A commemoration in memory of the victims is not tantamount to mere architectural designs. Rather, it is an initiative to accord the victims their rights, underline the atrocities they experienced, do them justice and document their suffering. The Holocaust memorial monuments built in Yugoslavia, Rwanda and other parts of the world show to what extent the people of the 21st century are committed to humanitarian actions that would do justice to children and women victims," he told Al-Monitor.

“Justice is an integral part of democracy.”

Khan added, “I am proud to be working with [Tamimi] and to be provided with such major support from the Iraqi government, high religious authorities such as [Shiite Ayatollah] Ali al-Sistani, the Yazidi baba [head] sheikh, as well as the Sunni and Shiite endowments, to document these crimes."

The investigative team will help Iraq gather, store and safeguard proof of IS war crimes.

Yazidi architect Darsem Neamo Khairi, who lives in Germany, designed the memorial monument for her master's thesis. In her eyes, the monument needs to represent the 74 massacres and genocide the Yazidis have experienced throughout history, according to Yazidi statistics. She believes it should also reflect the bright side of Yazidi traditions and culture, which are rooted in Iraq's ancient civilizations. The monument, she said, needs to be the link between the Yazidi and international communities, in a way that acknowledges a positive image of the Yazidis, and doesn't represent them only as genocide victims.

There's also a desire to set up a museum documenting crimes against humanity, genocide and war crimes perpetrated by IS against other minorities — such as Christians, ethnic Shabak people in the Ninevah Plain and Mosul, Turkmens in Tal Afar and Yarsan in Kirkuk — as well as the estimated 1,700 Shiite youth volunteers killed in the Camp Speicher massacre. This desire could pose a challenge to the Yazidi monument, but a considered approach could turn the museum into a symbol of unity, rather than one of competition over which group has suffered the most at the hands of IS.

Khan suggests establishing a national museum commemorating the various stories of Yazidi survivors as well as the Sunni, Shiite and other communities who came to their aid. He said such an initiative could express Iraqi unity in times of distress, and reveal that differences vanish when people face fateful and existential challenges.