While Monday’s findings leave “no space for denial,” Yazidis now call for legislation and support for development of social and economic life. 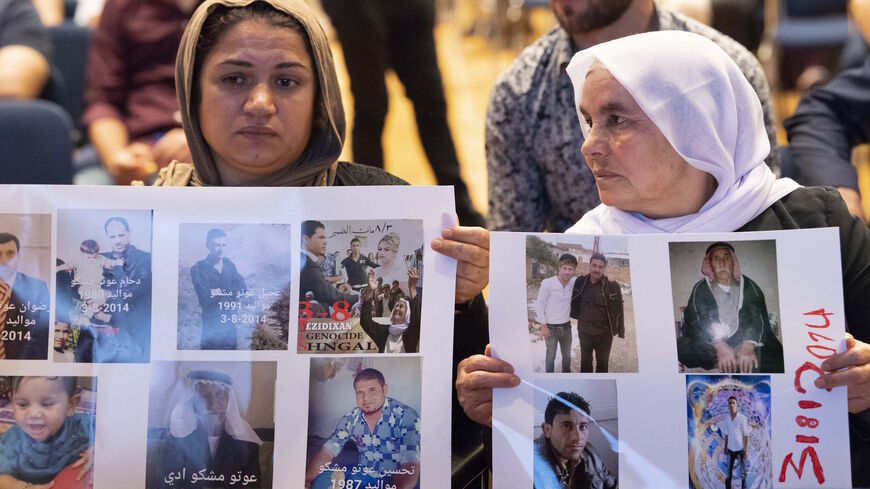 Yazidi women hold up pictures of missed relatives during a commemoration ceremony in Stuttgart, southern Germany, on Aug. 3, 2019. - THOMAS KIENZLE/AFP via Getty Images

A United Nations investigation into atrocities committed by the Islamic State (IS) in Iraq found “clear and convincing evidence” of genocide against the Yazidis, according to a UN Security Council briefing on Monday.

The road to genocide recognition began in September 2017 when the UN Security Council adopted Resolution 2379 establishing an investigative team to hold IS accountable for their actions. That team would later be referred to as the UN Investigative Team to Promote Accountability for Crimes Committed by Da’esh (UNITAD). Da’esh (or Daesh) is the Arabic reference to IS.

Five UN staff members were sent to Iraq in October 2018. Since then, a reported “mountain of information” was compiled by that team that included testimonies, forensic evidence from mass grave sites and digital data extracted from IS phones and hard drives.

Over the next two-and-a-half years, the investigation grew to six field teams, including a gender unit, children's unit, financial and tracking unit, and witness protection support unit. Together, they painted a clearer picture for international officials of the targeted actions by the extremist group.

“Executions, slavery, sexual slavery. Crimes against children that are horrific and really chill one’s soul, that how on earth could such things be allowed to happen, yet they did,” said special adviser and leader of the UN investigation team Karim Khan in his sixth and final report to the UN Security Council.

One of those testimonies came from 2018 Nobel Peace Prize winner Nadia Murad. A Yazidi from Iraq, Murad was kidnapped by IS in 2014 and sold into sex slavery along with some 5,200 others.

“I will never forget the grief in my mother’s eyes when she realized her sons had been executed — not knowing she would face the same fate,” Murad said in Monday’s virtual UN Security Council briefing. “I can still feel my niece’s hands being ripped out of mine as we were separated and loaded onto buses like cattle. And I can still calculate what my body was worth to those who bought and sold it.”

UNITAD worked with Iraqi officials in the federal territory and the Kurdistan Regional Government (KRG) to digitize and document its investigative files in what Khan called the “greatest universe of information available” against IS.

The files have allowed the UN to identify persons of interest that have committed these genocide crimes. The UN team has so far identified 1,444 perpetrators.

In their investigation, the UN team also found crimes that targeted Christian and other Muslim communities. Khan pointed to the IS propaganda video of the murder of cadets, mainly Shiite Muslims, at the Tikrit Air Academy that killed up to 1,700 Iraqis. This video was clear evidence, Khan said, of the crime of direct and public incitement to commit genocide.

This isn’t the first international recognition of IS’s atrocities against the Yazidis. Both the UN Commission of Inquiry on Syria and the US Holocaust Memorial Museum both recognized the targeted crimes as a genocide. But the UNITAD finding is significant, according to Sinjar Academy co-founder and president Murad Ismael, because it was an independent investigation conducted with the highest international standards.

Monday’s findings "leave no space for denial of what the Yazidis have suffered,” Ismael wrote to Al-Monitor. “Without such legal recognition, our genocide would have easily been denied and would have been a subject of political interpretations. UNITAD’s work and its findings will protect against that for all time.”

But the international community's work toward both recognizing IS’s atrocities and protecting minority communities like the Yazidis and others is far from over.

In total, at least 10,000 Yazidis were killed or abducted by IS. Over 200,000 Yazidis remain in internally displaced camps across Iraq. And about 2,800 Yazidis, mostly women and children, remain missing.

“Legislation, of course, is needed to ensure that Iraq has the legal architecture in place to prosecute this hemorrhage of the human soul — not as common crimes of terrorism, heinous though they are, but as acts of genocide, crimes against humanity and war crimes,” Khan said.

In March, Iraq’s parliament passed the Yazidi Women Survivor’s Law, a formal recognition of the Yazidi genocide that called for compensation, rehabilitation and education for survivors. It also created a new directorate for survivors' affairs and a civil court in the Ninevah governorate, and it outlined punishment for people involved in abduction and sexual crimes.

Implementing the law, however, presents a challenge for Baghdad amid mounting security and political instability. Yazidis are now encouraging the Iraqi federal government, the KRG, the UN Security Council and the international community to work together to provide security and stability for Yazidis' areas in Iraq and Syria.

“We hope for continued support, including the development of our community’s social and economic life, as our community does the painstaking work needed to heal from the genocide and its deep wounds, and to thrive in our homeland,” Ismael said.

On Monday during the UN Security Council briefing, Murad requested that the Yazidi genocide case be referred to the International Criminal Court. Khan assumes the post of prosecutor at that court next month.

“International tribunals are needed to address the universal magnitude of [IS] crimes against humanity,” Murad said.