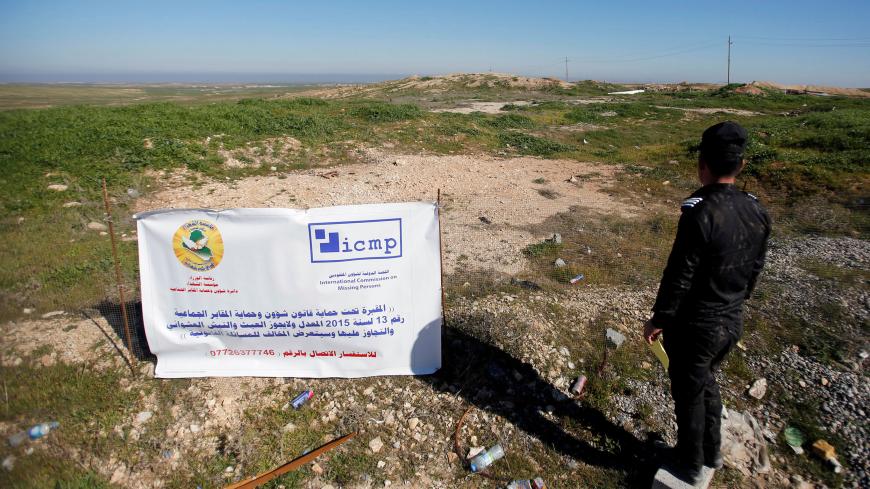 Khairi Ali Ibrahim watched on as teams of workers exhumed a mass grave of Yazidis in Kocho village, south of Sinjar. “It was difficult for the Yazidis," he said. "We waited for about five years for this step.”

Ibrahim, the director of the Yazidi Organization for Documentation in Sinjar, said the exhumation, conducted in March, was part of an initiative by a national team of Iraqi parliamentarians and politicians and UN representatives to exhume mass graves and to promote accountability for crimes committed by the Islamic State (IS).

On Feb. 27, the national team announced its first list of individuals found in the Yazidi mass grave. It included 62 names, all of them male.

At a Baghdad press conference, the national team said that 73 mass Yazidi graves had been found, and 13 of them exhumed. The remains of 347 victims have been retrieved from the graves. The team noted that the official funeral processions will take place March 12. The team noted that the burials will take place within the two following days. However, all ceremonies were postponed until further notice due to the outbreak of COVID-19.

Saeb Khadr, a parliamentarian for the Yazidis, praised the efforts of the international and national teams for their contribution to exhuming the graves. He affirmed at the press conference that the remaining graves will be exhumed, and he called for more attention to this matter. Khadr urged handing over IS members to the courts and charging them with committing genocide.

Dia al-Saadi, director of the Department of Mass Graves Affairs and Protection of the Martyrs Foundation, a governmental body, told Al-Monitor that the process of opening mass graves faces several challenges, including attacks from IS and its allies. The exhumation teams face other challenges such as diseases, difficulty breathing and sunstroke. Also, the graves are far from the cities and lack suitable places for teams to live, not to mention a shortage of finances to complete the work.

Saadi said the team's tasks include "searching for and opening mass graves and exhuming bodies, controlling and documenting the evidence, and then handing the remains to forensic medicine to conduct matching operations between the bone specimen obtained from the remains and the blood sample provided by the families of the victims. An identity verification document is then issued for those who are identified. All legal papers are also referred to the competent courts to enable and assist the judiciary to issue appropriate decisions.”

He agreed with Ibrahim that the identification of victims will help alleviate their families' suffering. It could also help rebuild trust between the families and state institutions, as well as facilitate accountability and future judicial procedures.

“Not all names of the exhumed bodies are revealed since the matching procedures are still ongoing in the forensic medicine department," Saadi said, adding that they do not have enough information about victims to make identifications. "The next steps will be to open soon some mass graves in Ninevah province. All Iraqis’ graves in general were documented and the names of the victims were entered into a database for the department.”

Ibrahim told Al-Monitor that the 62 Yazidis found in a mass grave had been shot and killed by the Islamic State. “The specialists and those who supervised the opening of the Yazidi mass graves confirmed this," he said. "They stated that most of the injuries were in the head and chest of the victims, all from Kocho village.”

He said the mass grave was discovered with the help of field survey teams as well as male and female survivors, "who were with their families when IS executed them."

“Some graves were already open, which led to bone loss," Ibrahim said. "Others were washed away by the rain torrents and must be worked on in utmost speed. The incomplete blood samples and their severe shortage substantially slow the work in forensic medicine. Some families may have no surviving members or one at best.”

Ali al-Bayati, a member of the Independent High Commission for Human Rights in Iraq, said the mass grave at Alo Antar, a giant pit, "contains the remains of more than 400 Shiite Turkmen victims, 600 Yazidis and other groups in addition to the bodies of members of the security forces from different regions in Mosul who were killed by al-Qaeda and IS members.”

Quoting eyewitnesses, Bayati said IS would detonate explosives at Alo Antar to expand the pit of graves. He said the government is working to open this mass grave to provide victims' families a sense of justice. Those families have given testimonies to the International Commission on Missing Persons and the Council of the Independent High Commission for Human Rights.

The Office of Kidnapped Yazidis, funded by the Kurdistan Regional Government, said the Islamic State killed and kidnapped thousands of Yazidis, and that dozens of mass graves are located in Sinjar and the Ninevah Plains.

Of note, the first Yazidi mass grave was opened on March 15, 2019, in Kocho village.