Six months after the exhumation of the last Yazidi mass graves, those of the Yazidi mothers are being exhumed in Sinjar, which contain over 80 mass graves. 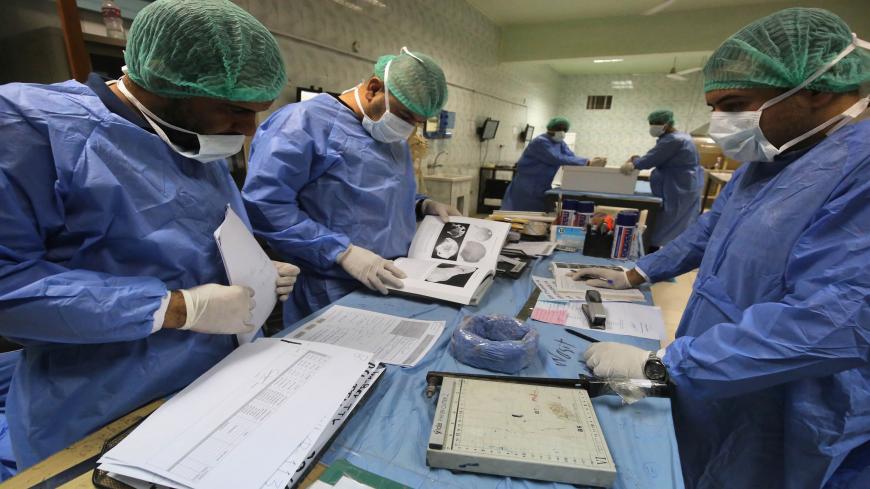 As traditional Yazidi music played and religious sayings resonated Oct. 24, national teams began exhuming a mass grave that held the remains of victims of the genocide against the Yazidis from the village of Kocho, in the southern Sinjar district in the western Ninevah governorate. This area, with the largest Yazidi presence in Iraq and the world, was invaded and controlled by the Islamic State (IS) in 2014.

These graves are known as the “Mothers’ Cemetery,” and are located in the Solagh area at the entrance to Sinjar district. The exhumation process was carried out by a national team in cooperation with the Investigative Team to Promote Accountability for Crimes Committed by Da’esh/ISIL (UNITAD), the International Commission on Missing Persons (ICMP) and the Ministry of Martyrs in the Kurdistan Regional Government (KRG), in the presence of Yazidi figures, representatives of government institutions and the clergy of the Yazidi Spiritual Council, in addition to figures from various religious components in the area.

According to statistics by the Kidnapped Yazidis' Rescue Office in the KRG, this is the 17th cemetery to be exhumed out of the 83 discovered mass graves. The national team believes that this cemetery contains the remains of more than 80 women and children.

After exhuming the remains, the national team transfers them to Baghdad for the required examination procedures, including DNA testing to find out the identities of the victims and match them with their relatives from whom samples have been taken. The remains are then handed over to their families for burial in the special cemetery established for victims of the genocide in the village of Kocho, which contains over 500 prefabricated graves.

The Mothers’ Cemetery contains the remains of the mother of Yazidi survivor and Nobel Peace Prize winner Nadia Murad, who tweeted Oct. 24, “In 2014, ISIS took the life of my beloved mother. For six long years, I and other survivors were denied the right to bury our loved ones with dignity.”

The process of exhuming Yazidi mass graves stopped in February due to the lack of funds, according to Dia Karim al-Saadi, director of the Department of Mass Graves Affairs and Protection of the Martyrs Foundation in Iraq, who told Al-Monitor that the new work phase began with the exhumation of the Mothers’ Cemetery.

Saadi said that this stage will continue until Nov. 12, provided that the remains will be transferred to the morgue of the Martyrs Foundation in Baghdad.

The former executive director of the Yazda Organization, Murad Ismail, told Al-Monitor, “The Yazidi mass graves face several problems, including the lack of proper work continuity and the delay in the exhumation process that made us lose much evidence that might serve the Yazidi case. There are over 80 mass graves in addition to dozens of individual ones, many of which were destroyed by torrential rains in the past six years, which led to the loss of many remains.”

Yazda also welcomed the Oct. 24 exhumation of the graves in Kocho as a step that strengthens the investigation of the crimes committed by IS against the Yazidis in Iraq.

Natia Navrouzov, Yazda documentation project manager and international lawyer, told Al-Monitor that these mass graves are important for two main reasons. The first is the criminal investigation carried out by UNITAD to bring IS members to justice, since mass graves constitute forensic evidence of IS crimes and can confirm the hundreds of witness statements of Yazidi survivors. The second reason, she noted, is the right to the truth for the families, as they have the right to know what happened to their loved ones and have the right to have their remains returned to them in order to organize burials that follow Yazidi religious rituals.

“The protection of mass graves has been an issue since the genocide. Yazda has documented most of them in Sinjar for potential criminal cases but also to keep a historical record of the atrocities and mass executions committed against the Yazidis by IS,” she said.

Navrouzov noted, “Surface graves are the most at risk and need urgent protection; they are subjected to weather, animals and human activities. This evidence is fading with time. Yazda asked the relevant authorities and stakeholders several times to prioritize these graves, but unfortunately nothing has been done to excavate them or simply to protect them until excavation can be carried out.”

Khairi Ali Ibrahim, director of the Sinjar branch of the Yazidi Organization for Documentation, told Al-Monitor that some graves have been vandalized amid negligence while others were set on fire, such as the Hardan cemetery. Fortunately, he noted, the bones were intact since they were under the dirt, but the evidence, such as the gunshots inflicted on the victims as they were executed, was destroyed there.

He said that many graves were damaged in the Zilayyah and Qeni areas due to torrential rains and many bones were lost as a result. He noted that animals took many of the bones since no fences surrounded the graves.

Ibrahim pointed out that another cemetery in Seba Sheikh Khadr, southern Sinjar district, is located in a car garage that could collapse at any moment, while some graves in Senouni were exhumed by locals and burial ceremonies were held for them in the Sharafeddin shrine without confirming the identity of the victims and conducting the necessary medical examinations.

The exhumation of the Yazidi mass graves began on March 15, 2019, in Kocho. The remains of 347 victims have been exhumed so far, according to the forensic medicine department in Baghdad.

In late February, the Iraqi government released a list that included the names of 62 Yazidis whose remains were exhumed from 13 mass graves in Sinjar district, and the funeral ceremonies were postponed until further notice due to the outbreak of the coronavirus.

Meanwhile, the Yazidis mark time, waiting for justice to be served, six years after the genocide.