With help from the United Nations, the Iraqi government has begun exhuming the mass graves of thousands of Yazidis killed by the Islamic State. 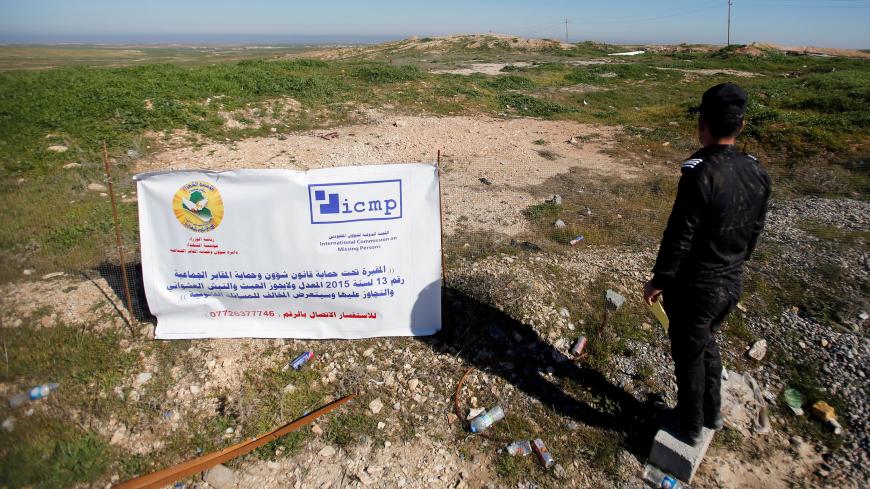 Iraqi workers have completed the first of many exhumations of mass graves of Yazidis killed by the Islamic State in 2014.

The process began March 15 under the supervision of the Iraqi cabinet, the Ministry of Health and the government-affiliated Martyrs Foundation in cooperation with the United Nations and its investigative team. Nobel Peace Prize laureate Nadia Murad was also in attendance. Now a human rights activist, Murad was held capitve by IS as a slave for three months before she was able to escape.

This first grave, located in the village of Kocho in western Mosul's Sinjar district, held the remains of hundreds of Yazidis. The atrocities IS carried out against the Yazidis in northern Iraq were concentrated in Kocho, dubbed the Mother of Massacres by its residents. Around 400 people were killed in Kocho and more than 750 women and children were kidnapped after IS took control of Sinjar, the largest Yazidi area in the north.

The long-persecuted Yazidi religion first emerged in Mesopotamia more than 4,000 years ago. A third of its estimated 1.5 million followers live in Iraq. It is considered one of the oldest religions in the world.

A spokesman for Iraq's Independent High Commission for Human Rights, Ali al-Bayati, told Al-Monitor the exhumation is the first step in uncovering the fate of hundreds of people who vanished during IS' reign of terror. He said, “Around 75 [mass] graves are in Sinjar alone, not to mention the 300 others in neighboring areas that IS had occupied. According to official estimates, these graves contain between 4,000 and 12,000 bodies."

IS targeted minorities such as Yazidis and Shabak, as well as other groups such as Turkmens and Shiites as well as members of Sunni tribes who were in contact with the government and the official security forces.

The UN Security Council established an investigative team in Iraq in 2017 “to support local efforts to hold accountable those responsible for mass genocides by collecting, preserving and storing evidence in Iraq in accordance with international standards.”

Bayati noted, “The graves indicate that this was an international crime, as some of the involved criminals were foreigners. They need to be opened within a short period of time, especially in the presence of an international team under a Security Council resolution.” He added, "This will strengthen the evidence of crimes committed with the help of international networks financing terrorism, which is why an international effort is required to reach the perpetrators in other countries.”

On March 15, Murad restated her belief that the Iraqi government “failed to protect the souls of the victims when they were still alive.” She added, “I hope they will not fail to bury their remains properly."

Al-Monitor contacted the Martyrs Foundation, which noted that the foundation sent a technical team in 2018 to survey the grave sites in Tal Afar, Sinjar and Al-Baaj.

The Martyrs Foundation office explained, “The foundation is concerned with preserving these graves and making sure there is no damage to them due to either natural factors or deliberate attacks, since most graves are not very deep and can be easily dug up,” and “Specialized teams are working with the technical entities to prepare a database of victims' families to match them with the remains extracted from the graves.”

Hajji Kandour al-Sheikh, a Yazidi member of the Iraqi Parliament, told Al-Monitor, “The fact that there are dozens of graves north and south of Mount Sinjar and in the valleys … makes the task difficult and time consuming and requires exceptional effort, particularly since the presence of mines delays the process.”

He said, “The remains are being transferred to the forensic department in Baghdad to identify as much of them as possible."

Kandour al-Sheikh noted, “There are around 6,000 missing persons and the department of mass graves is cooperating with the Martyrs Foundation to hand over the remains to their families and ensure their rights guaranteed by the Iraqi Constitution." If the families consent, he said, "exhumed remains will be collected and buried in a national cemetery in Sinjar, as a testament to the crime.”

Former judge Ali al-Tamimi told Al-Monitor, “The Iraqi Constitution ... recognizes the Yazidis’ right to practice their religion. ... The law defines martyrs as those who sacrificed themselves and their lives for the sake of their homeland, and thus this law applies to the Yazidis who were martyred [by IS]. Their children and their parents need to be compensated and their graves need to be documented and counted among the graves of victims of terrorism."

Bayati noted, “The mass graves will improve the chances of establishing a court specialized in these crimes of genocide or could help Iraq's accession to the International Criminal Court.”