Iran and the United States are clashing over which country will return to its commitments under the nuclear deal first. 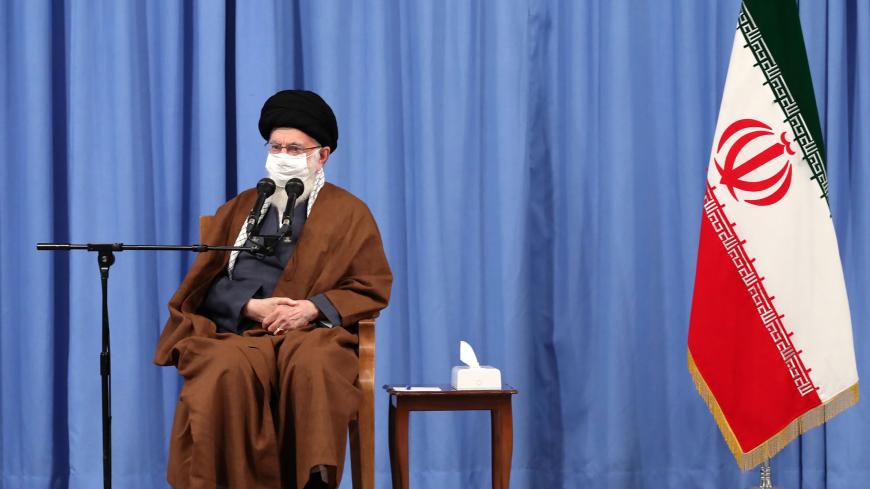 Iranian Supreme Leader Ayatollah Ali Khamenei said Feb. 7 that the United States must make the first move when it comes to reentering the Iran nuclear deal. Here, Khamenei wears a face mask on Oct. 24, 2020, as he gives a speech in the capital, Tehran, during a meeting to discuss the coronavirus pandemic.

Both Iran and the United States have expressed interest in returning to their commitments under the 2015 nuclear deal, known formally as the Joint Comprehensive Plan of Action (JCPOA), which the previous US administration exited. However neither side seems to agree on exactly how to do it, with both Washington and Tehran exchanging views through the media.

Iranian Supreme Leader Ayatollah Ali Khamenei, who makes all final decisions of the state, spoke about the JCPOA during a speech to air force commanders Feb. 7. “The Americans and Europeans do not have a right to set conditions because they are the ones who violated their JCPOA commitments,” Khamenei said. “The side which must set conditions is the Islamic Republic, which adhered to its commitments.”

Khamenei continued, “Therefore, Iran will return to its JCPOA commitments when America removes all the sanctions in practice, not just on paper and not just in words.” He added that Iran itself must “verify the removal of the sanctions.” Leaving little wiggle for Iranian diplomats, Khamenei also said, “This is the definite and irreversible policy of the Islamic Republic.”

Former President Donald Trump exited the nuclear deal in 2018 and reapplied US sanctions, which severely hurt Iran’s economy. Iran in turn took steps away from its nuclear commitments on enrichment and other issues. However, Iran argues that, according to Articles 36 and 37 of the JCPOA text, Tehran is allowed to take these steps and technically remain in the deal since it was the United States which violated the deal first. The impasse now is whether Washington will remove sanctions first and have Tehran lower its enrichment levels back to 3.67%, which the JCPOA calls for, or whether Iran must lower enrichment first and then have the United States remove sanctions.

President Joe Biden was asked about a return to the nuclear deal during a CBS interview that aired Feb. 7. When the reporter asked whether Iran must end enrichment for the United States to remove sanctions, Biden nodded his head. The Biden administration quickly issued a clarification, saying that the president meant that Iran should stop “enriching beyond the limits under the nuclear deal.” However, even that clarification leaves Iran and the United States at a stalemate.

Iranian Foreign Minister Mohammad Javad Zarif also spoke about reentry into the nuclear deal. He reiterated Iran’s position that Tehran “reduced [its] commitments under the framework of the JCPOA.” Zarif also talked about negotiating on other issues, such as missiles, saying, “The JCPOA was finalized without an agreement on those other issues and we will not hold talks again on those things.” Regarding Europe’s standing in the JCPOA, Zarif said, “The Europeans showed not only that they have no power over their own companies, but that their companies listen to Washington.” After the United States left the nuclear deal, many European companies either pulled out of Iran or refrained from investments in the country due to fears of fines from the US Treasury.