Iran’s FM tweets 'reality check' to US on nuclear deal

Iran's foreign minister responded over Twitter to US Secretary of State Antony Blinken's comments regarding US reentry to the deal. 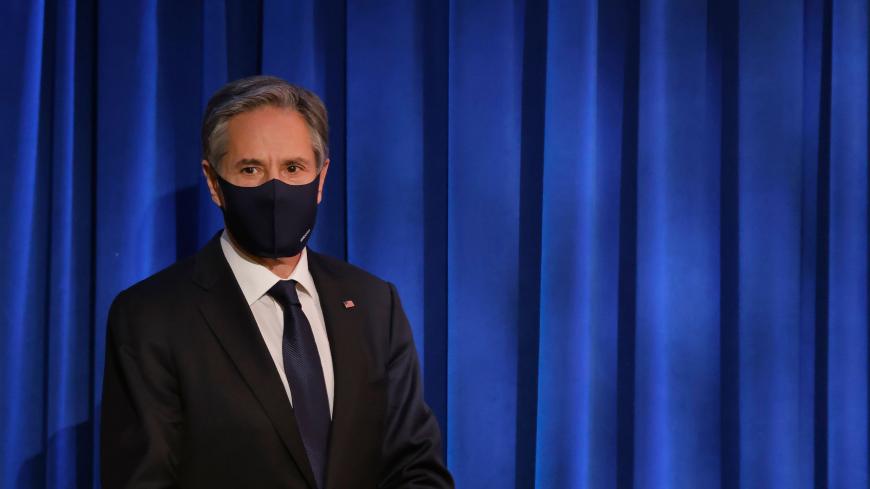 US Secretary of State Antony Blinken faces reporters during his first press briefing at the State Department in Washington, DC, on Jan. 27, 2021. - CARLOS BARRIA/AFP via Getty Images

US Secretary of State Antony Blinken's first press conference caught the attention of Iranian media and officials in Tehran when he addressed the reentry of the United States into the Iran nuclear deal.

“If Iran comes back into full compliance with its obligations under the JCPOA, the United States would do the same thing," Blinken said at a Wednesday press conference, using the acronym for the Joint Comprehensive Plan of Action. He added, "Then we would use that as a platform to build, with our allies and partners, what we called a longer and stronger agreement and to deal with a number of other issues that are deeply problematic in the relationship with Iran.”

Blinken was responding to a question from a reporter and not hashing out a long-term US strategy. While he was more or less reiterating what Biden’s team had campaigned on, Iranian officials jumped on the comments.

Foreign Minister Mohammad Javad Zarif tweeted directly to Blinken, offering a “reality check” in the form of a list of US actions since the signing of the 2015 deal. Zarif wrote that Washington “violated JCPOA, blocked food/medicine to Iranians" and punished adherence to UN Security Council Resolution 2231, which endorsed the JCPOA. Zarif also wrote that Iran abided by the deal and “only took foreseen remedial measures” in its departures. He asked, “Now, who should take 1st step? Never forget Trump’s maximum failure.”

When the previous US administration exited the JCPOA and reapplied nuclear sanctions, Iran’s economy took a hard hit. Its oil exports were reduced drastically and difficulties conducting banking transactions forced the country to enter complex arrangements for payments. The banking sanctions even made European countries sending medicine to Iran cautious, for fear of crossing the long arm of the US Treasury, at points needing Switzerland to act as intermediary.

In response, Iran took what it called phased steps away from the nuclear deal, increasing enrichment and other nuclear capabilities. Tehran, however, insisted all the steps were reversible and would be undone if sanctions on the country were removed and the United States reentered the deal.

Parliament speaker Mohammad Bagher Ghalibaf also weighed in on the matter today. “We have no responsibilities to be committed when they’re not,” said Ghalibaf at the Fordow enrichment facility. “When they implement their commitments, meaning the lifting of all sanctions and banking and oil and trade problems, with a report to parliament based on Articles 36 and 37 [of the JCPOA], we will return to our own commitments.”

In December 2020 the parliament passed a bill called the “Strategic Action Plan to Remove Sanctions.” The bill calls for taking measures to dramatically increase Iran’s nuclear capabilities. The intention of the bill, as the name suggests, is to force the United States to reenter the nuclear program and remove the sanctions.