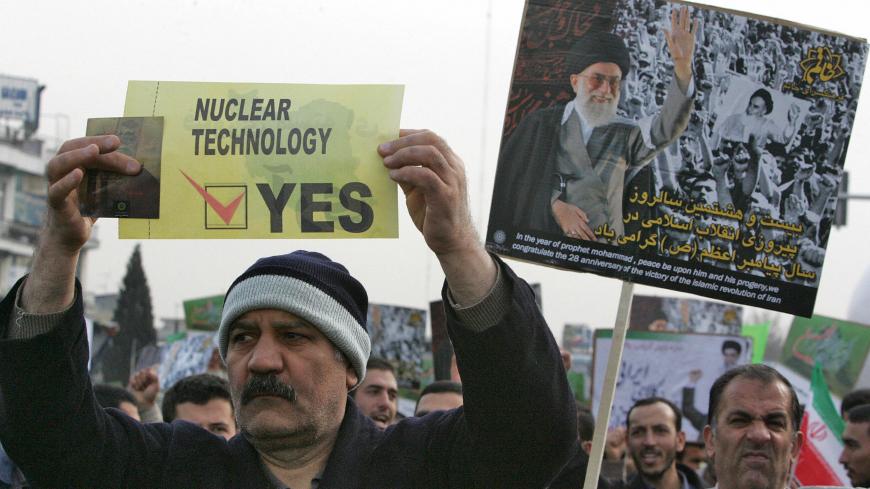 An Iranian man carries a placard in support of nuclear technology as another waves a portrait of Iran's Supreme Leader Ayatollah Ali Khamenei during a rally to mark the 28th anniversary of the Islamic revolution in Tehran Feb. 11, 2007. - ATTA KENARE/AFP via Getty Images

Iran’s Supreme Leader Ayatollah Ali Khamenei threatened that his country could begin enriching uranium up to 60% purity, a day after Tehran and the United Nations’ atomic watchdog resolved a standoff over nuclear inspections.

Iran “will enrich uranium to any extent that is necessary for the country,” an account believed to belong to Khamenei tweeted. “Iran's enrichment level may reach 60% to meet the country's needs.”

After former President Donald Trump unilaterally withdrew from the nuclear agreement known as the Joint Comprehensive Plan of Action (JCPOA) in 2018 and reimposed harsh economic sanctions, Iran began steadily violating its terms of the deal. In January, Iran announced that its Fordow nuclear plant was enriching uranium to 20% purity, far surpassing the JCPOA’s 3.67% limit and bringing Iran closer to possessing weapons-grade fuel.

Khamenei’s comments come as Iran presses ahead with its plan to suspend implementation of the so-called Additional Protocol, ending the short-notice inspections of its nuclear facilities conducted by the UN's nuclear watchdog, the International Atomic Energy Agency (IAEA).

But in a deal reached with the IAEA on Sunday, Iran agreed that the UN agency can continue “necessary” verification and monitoring activities for a period of up to three months. Under the agreement, Iran will provide the IAEA with recordings from its cameras inside the facilities if the sanctions are fully lifted.

“Otherwise it will be deleted forever,” Iran's ambassador to the IAEA Kazem Gharibabadi tweeted.

The IAEA’s director general, Rafael Grossi, framed the agreement as a “temporary solution that allows us to continue to give to the world the assurances of what is going on there in the hope that we can return to a fuller picture.”

Iran’s deal didn’t satisfy parliamentary hard-liners, who passed legislation in December that called for increased nuclear activity and the limiting of UN inspections.

“The government has no right to decide and act arbitrarily,” said Mojtaba Zolnour, chairman of the parliament’s national security committee. “This arrangement is an insult to the parliament.”

President Joe Biden wants to rejoin the 2015 accord, which offered sanctions relief in exchange for curbs on Iran’s nuclear program, as a starting point for follow-on negotiations aimed at crafting a stronger deal. But Iran and the United States are at a standoff over who should make the first move, with the Biden administration insisting Tehran return to full compliance under the JCPOA before the United States lifts sanctions.

Iranian leaders, who insist their nuclear program exists for only peaceful purposes, refuse to roll back their JCPOA violations without total sanctions relief. Iranian Foreign Minister Mohammad Javad Zarif repeated the Iranian position in an interview on Sunday with English-language Press TV and accused Biden of continuing the Trump administration’s "maximum pressure" campaign.

“The United States is addicted to sanctions, but they should know that Iran will not yield to pressure,” Zarif said. “We are not seeking nuclear weapons.”

Zarif’s comments follow an announcement from the Biden administration last week that it would be willing to sit down with Iran and other parties to the nuclear deal. White House national security adviser Jake Sullivan told CBS’ "Face the Nation" on Sunday that Iran had "not yet responded" to the offer.