Iran warns it could halt IAEA cooperation after US criticism

Tehran has threatened to call off a recent deal with the United Nations' atomic watchdog that allows for limited inspections of Iran's nuclear facilities. 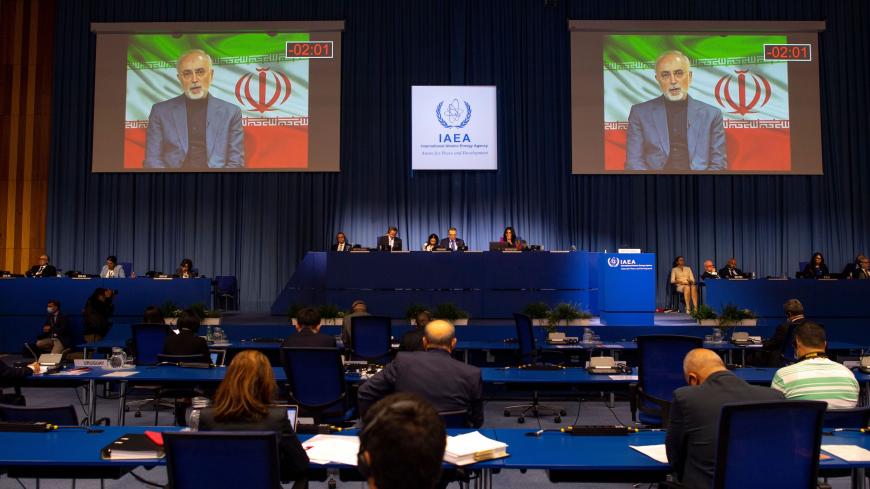 Iran's Atomic Energy Vice President Ali Akbar Salehi is seen speaking on a screen as he virtually attends the 64th General Conference of the International Atomic Energy Agency at its headquarters in Vienna, Austria, Sept. 21, 2020.

The United States and Iran are at odds over who should make the first move to restart diplomacy over the landmark 2015 nuclear agreement known as the Joint Comprehensive Plan of Action (JCPOA). President Joe Biden says the United States will reenter the agreement only if Iran resumes full compliance under the deal. But Tehran says it will only reverse its nuclear violations if Washington lifts sanctions.

This week Iran halted snap inspections of its nuclear facilities after a deal reached with IAEA chief Rafael Grossi that saw the country suspending short-notice visits from inspectors in exchange for the UN agency continuing its regular verification and monitoring activities for a period of up to three months.

The United States has reportedly asked the IAEA’s 35-member board of governors to produce a resolution that voices their “deepening concern with respect to Iran’s cooperation with the IAEA.”

A US paper submitted to the IAEA and viewed by Reuters urged the agency’s board to “call on Iran to reverse its breaches of the deal and cooperate with the IAEA to explain how uranium particles were found at old, undeclared sites.”

Since the previous administration abandoned the deal in 2018 and reimposed crushing sanctions, Iran has gradually enriched uranium beyond the JCPOA’s limits. Earlier this week, news agencies reported on a confidential IAEA document that said Iran had added to its stockpile 17.6 kg of uranium enriched up to 20%, in violation of the 3.67% cap set by the JCPOA.

In a position paper of its own also obtained by Reuters, Iran described the proposed resolution as “destructive" and the "end to the joint understanding” reached between the IAEA and Iran last weekend. Iran warned the US move “may lead to further complications in relation with the JCPOA.”

Last week, the Biden administration announced it was willing to attend an informal meeting of the deal’s original signatories to discuss a path forward on the nuclear issue. Iran has hasn’t committed to attending, but Foreign Minister Mohammad Javad Zarif said Iran was "considering" it.