Egypt seeks to strengthen its ties with Burundi and the Nile Basin countries in a bid to curb Turkey’s expansion in East Africa, to protect its national security from any threats. 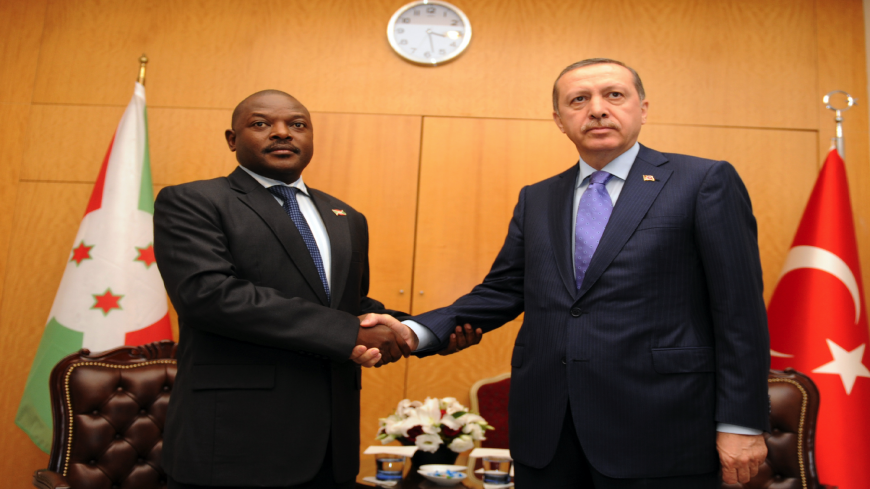 CAIRO — As a foreign policy priority for Cairo, Egypt seeks to strengthen its ties with Burundi and the Nile Basin countries, to limit Turkey’s expansion in East Africa and protect its national security from any threats. Egypt and Burundi share a historical relationship as Nile Basin countries.

In the same week, on Feb. 18, Egyptian Foreign Minister Sameh Shoukry received a phone call from his Burundian counterpart. The conversation touched on the bilateral relations, ways to strengthen them and coordination to hold a joint committee in the coming period.

These developments, experts and observers told Al-Monitor, can also be seen as part of Egypt's efforts to block Turkey’s influence in East Africa.

East Africa has been a vital arena for Turkish maneuvers in recent years, with the Red Sea forming a global trade artery between Asia and Europe. Yet Turkey’s quest to establish a foothold in the Nile Basin countries is seen by Egypt as a threat to its national security and to that of other Arab countries.

Tariq Fahmy, a professor of political science at Cairo University, told Al-Monitor over the phone that strengthening relations with Burundi is one of Egypt’s foreign policy priorities. “Burundi is an important country for Egypt not only because of the African geographic connection but also because it is one of the Nile Basin countries. Building stronger ties aims to preserve Cairo’s interests, protect its water security, and shrink the presence of Turkey and any forces opposing Egyptian national security.”

Along with its strong relations with Cairo, Fahmy noted that Burundi has strong ties with Turkey, Iran and Israel. He explained that Egypt wants to win Burundi to its side on the issue of the Grand Ethiopian Renaissance Dam (GERD) and Egyptian water security.

He asserted that Turkey’s presence in the African continent, especially East Africa, started growing significantly in recent years. “This poses a threat to the Egyptian and Arab national security and their strategic interests,” Fahmy warned. “Therefore, Egypt placed on top of its foreign policy priorities boosting ties with the African brotherly countries, intensifying its presence in them and providing them with development support. For this purpose, Egypt seeks stronger coordination with African Union countries, especially the Nile Basin countries such as Burundi, Rwanda, Congo, Sudan, South Sudan and others. This will allow it to preserve water security, curb the influence of Turkey and ward off the threat of any other hostile forces to its interests.”

He continued, “Ethiopia is using Turkey as a trump card to pressure Egypt on the Nile water and the Ethiopian dam issues. Addis Ababa requested Ankara's mediation in its border dispute crisis with Sudan, in response to Cairo’s support to Khartoum. This pushed Egypt to focus on strengthening its relations with the Nile Basin countries in the recent period. These countries will have a major role in the Nile water crisis by pressuring Ethiopia to stop its water plans, especially after Congo assumed the presidency of the African Union.”

Mona Omar, the former assistant foreign minister for African affairs, believes the Egyptian-Burundian relations are strong and historic. She explained, “Ethiopia had called for a framework agreement for the Nile Basin countries, known as the Entebbe Agreement, in 2010, and Egypt and Sudan rejected it due to its severe harm to their water security. Burundi only signed this agreement after the January 25 Revolution of 2011 that toppled the regime of former President Hosni Mubarak. But the Burundian parliament has yet to ratify it as an expression of its support for Egypt and its water security concern. Naturally, Egypt and Burundi will have strong ties. Their relationship is not new; it extends for many years.”

In an exclusive interview with Al-Monitor, Omar added, “Egypt is keen to train Burundian cadres in all fields to provide them with the necessary expertise that they will transfer to Burundi to push development efforts forward and increase investment. Among African countries, Burundi has the largest number of participants in training courses held by Cairo. Also, Egyptian investors and experts support Burundi in many fields such as energy, agriculture and water.”

She affirmed that Egypt seeks to increase the number of Egyptian investors and companies in Africa to preserve its interests. “Egypt believes having strong ties with the Nile Basin countries will allow it to reinforce its national security and counter any threats, whether by Turkey or others.”

She said, “Global powers, not only Turkey, are racing to control the African continent and striving for a presence there. They seek to exploit this continent's rich wealth and raw resources and to market their products and goods to its population that exceeds 1 billion. Therefore the increasing Egyptian presence in Africa is all the more important.”

Basant Fahmy, a former member of the parliamentary Economic Committee and a professor of economics at Cairo University, believes the Egyptian economy has gained strength. She told Al-Monitor, “Giant Egyptian companies with experience in energy, agriculture and infrastructure could be the gate to the African continent. The Egyptian economy can fortify the African national economy and preserve its national security from any external threats, whether from Turkey or other regional power.”

She continued, “Egypt has been the gateway and axis of the African continent since ancient times. It has enormous expertise in energy, construction, agriculture and water, and surpasses Turkey.  African countries, especially Burundi, a Nile Basin country, ought to tap on this experience to their own support development efforts. Economic power is one of the most important means for Egypt’s expansion in Africa and for countering any attempts to threaten Cairo’s national security.”

On another note, Basant stressed the need to activate the African Continental Free Trade Area agreement that went into effect Jan. 1. She explained that the Egyptian products must be of high quality and reasonably priced in order to be able to penetrate the African market. “This will bring positive results, not only at the economic level by boosting Egyptian exports, but also at the political, as it will curtail Turkey or other powers’ regional influence,” Basant concluded