Egypt continues to strengthen its security relations with the countries of the Nile Basin, most recently with Kenya, with no end in sight of the crisis with Ethiopia over its Nile dam. 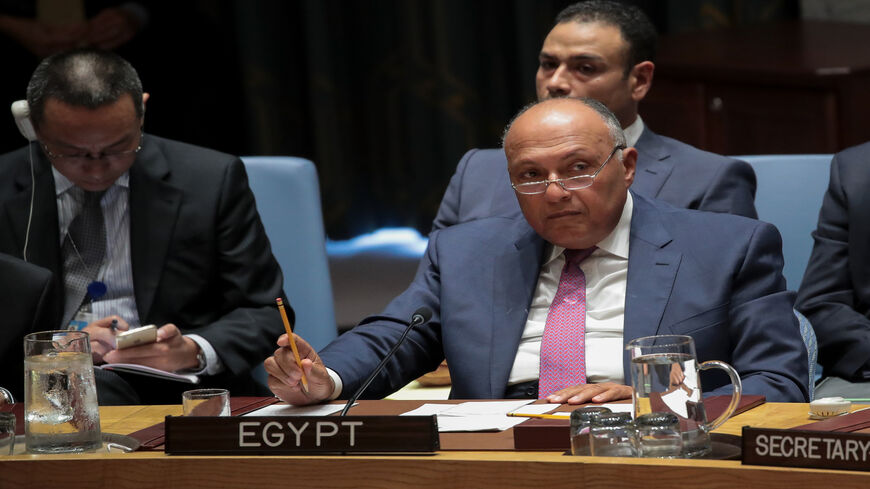 CAIRO — Kenya’s Minister of Defense Monica Juma announced May 26 the signing of a military cooperation agreement with Egypt, during a meeting with a high-ranking Egyptian military delegation headed by Chief-of-Staff Gen. Mohamed Farid in Nairobi.

The Egyptian army confirmed the agreement in a May 30 statement, noting the Farid had met with his Kenyan counterpart Robert Kibochi, with whom he co-chaired the closing session of the Egyptian-Kenyan Military Committee’s meeting in Nairobi. Farid then traveled to Rwanda for further discussions on regional security.

The Kenyan Ministry of Defense said that the agreement aims at “deepening partnership [between the two countries] in matters of mutual benefit.”

This is the fourth agreement that Egypt signs with countries in the Nile Basin region in 2021 alone. It signed a defense agreement with Sudan in March, one in April with Uganda on exchanging military intelligence information, and another in April with Burundi.

Abbas Sharaqi, professor of natural resources at Cairo University, told Al-Monitor that these agreements reflect Egypt’s efforts to bolster its security relations with the “ring countries” around Ethiopia to protect its water interests in the Nile Basin region.

In a May 28 lecture at the National Defense College in Kenya, during a training course on how armies respond to risks and threats — in the presence of delegations from nine countries, including Egypt’s — Juma said that the national security environment is evolving and unpredictable. “Importantly, the cohort [training course] included course participants from nine allied countries. We will continue to strengthen these invaluable relations,” she added.

The pace of cooperation between Egypt and Kenya has grown in recent years. The two countries held a round of political consultations April 12, followed April 19 by a visit by Egyptian Foreign Minister Sameh Shoukry to Nairobi to discuss the issue of the Grand Ethiopian Renaissance Dam (GERD), in addition to cooperation in the fields of health, agriculture and livestock.

Maj. Gen. Yahya Kadwani, a member of the Defense and National Security Committee at the Egyptian parliament, told Al-Monitor that since President Abdel Fattah al-Sisi assumed power, he has been successfully trying to restore relations with African countries, just as they were during the era of Gamal Abdel Nasser, the Egyptian leader who united the African peoples seeking peace and freedom.

Since Sisi took power in 2014, he has focused on Africa after Egypt was affected by Cairo’s absence from the continent since the 1990s, as part of efforts to improve Egypt’s image and strengthen its position in the GERD issue.

Kadwani said that Egypt's security experience and reputation in combating terrorism made it an honest ally, which prompted many African countries to conclude agreements with it.

He noted that the African arena suffers from a large security vacuum that has been exploited by terrorist groups and regional powers sponsoring terrorism to tamper with the security and stability of the region, especially in Nigeria and Niger.

However, Sharaqi explained that although these agreements are required in normal circumstances to confront terrorism in Africa, they carry Egyptian messages addressed to Ethiopia primarily over the GERD issue.

Kadwani stressed, “Egypt does not fake positions and is known to be a sponsor of peace, and its position is clear. It is proceeding with caution and wisdom in order to solve the GERD crisis peacefully.”

He added, “For us [Egypt], the water issue is a matter of life and death, as Ethiopia tampers with our legitimate rights that are guaranteed by long-standing and binding agreements, and delays negotiations.”

On March 30, Sisi said that taking one drop from Egypt's share of the Nile water would be crossing a red line, and that it would be met by a seismic response that would destabilize the entire region. Journalists close to the Egyptian regime also reported that Egypt might be forced to carry out a military blow against the dam if the negotiation process does not succeed.

“This is an extremely dangerous issue and there are pressures from all the Egyptian popular and political spectrum to take the necessary position to defend the national water security,” Kadwani noted.

He added, “Egypt does not want to resort to other methods [than negotiations], so it seeks alongside international partners to solve the crisis peacefully, and we hope that it will eventually lead to reaching an agreement."

Al-Ahram Center for Political and Strategic Studies stated May 28 that the recent rise of the Egyptian role in the Horn of Africa and the Nile Basin is not limited to the GERD issue alone, but rather to restore balance and stability to the region after Ethiopia’s moves there led to more civil and regional wars, as well as containing the negative influence of rival regional powers such as Turkey.

However, the recent agreements with African countries reflect a major shift in Cairo’s relationship with the Nile Basin countries since the Entebbe Agreement was signed in 2009. Kenya, Burundi and Uganda are among the countries that signed the agreement, while Egypt and Sudan refused to do so.

Sharaqi said that Ethiopia took advantage of Egypt's absence from the African continent in the past years and imposed its influence on the countries of the Nile Basin, and wanted to involve them in the GERD crisis. The recent Egyptian moves are a strong message to Ethiopia and may lead to resolving the Entebbe Agreement differences, he added.

However, he believes this does not mean that the loyalty of these countries will shift toward Egypt against Ethiopia, but at least a balance can be achieved.

Mohammed Soliman, a senior associate at McLarty Associates, an advisory firm based in Washington, told Al-Monitor, “Cairo went on a charm offensive in key East African nations — Burundi, Kenya and Uganda — through military, intelligence and economic cooperation, to build its power projection in East Africa.”

He added, “Amid the growing tensions over the GERD dispute, Cairo developed a Nile strategy that is centered around realignment with Sudan and a web of economic and military alliances in East Africa and the Horn of Africa to provide Egypt with the ability to project influence in the Nile Basin.”

Soliman noted, “Egypt wants an agreement with Ethiopia and Sudan that would build trust and confidence and lay the foundations for broader cooperation on future development projects in the Nile Basin.”

Meanwhile, Sharaqi pointed out that concluding these agreements is not enough, and Egypt has to strengthen economic cooperation that has not yet reached the required level.

“In the past, Egypt had a pioneering role in liberating African countries from colonialism, but the new generations in these countries want development now and we have to offer it to them,” he concluded.

Update: June 2, 2021. This article has been updated to note an Egyptian military statement on the agreement.