Egypt and Sudan are trying to secure the support of Kenya, Africa’s representative on the UN Security Council, in the dispute over the filling of the Grand Ethiopian Renaissance Dam. 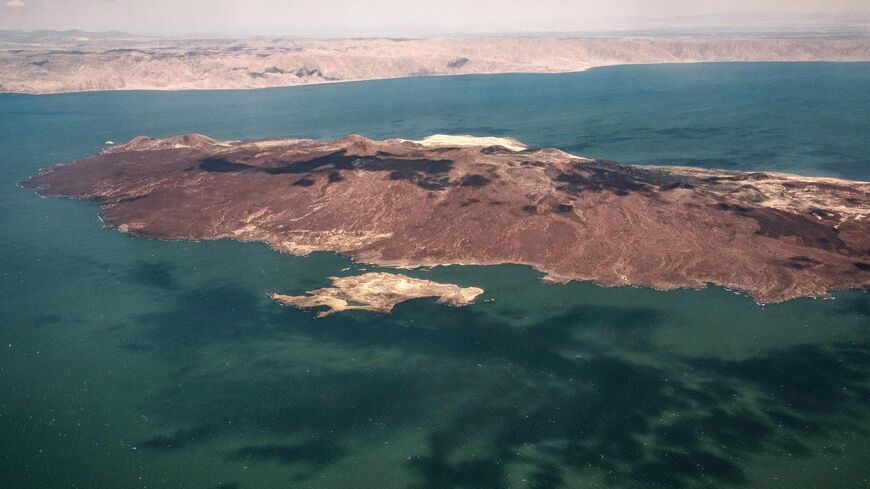 Kenya has expressed certain sympathy for the problems the Grand Ethiopian Renaissance Dam on the Blue Nile might cause for Sudan and Egypt because another Ethiopian dam caused issues for Lake Turkana in northern Kenya. Here, an aerial image taken on June 30, 2018, shows a part of Turkana South Island in Lake Turkana, the world's largest desert lake, in northern Kenya. A UNESCO panel has added Lake Turkana to the list of endangered World Heritage Sites. - YASUYOSHI CHIBA/AFP via Getty Images

Egypt is seeking to win Kenya’s support for its stance on the Grand Ethiopian Renaissance Dam, as Kenya is Africa’s representative at the UN Security Council. Egypt is considering the option of formally taking the dam issue to the United Nations.

Indeed, Egyptian Foreign Minister Sameh Shoukry made Kenya the first stop on his tour to mobilize African support for Cairo's position on the dam.

On April 19, Shoukry met with Kenyan President Uhuru Kenyatta. An Egyptian Foreign Ministry statement said Shoukry told Kenyatta that Egypt hopes an agreement on the dam can be reached "that preserves the security and stability of the region.”

The statement spoke of the “pioneering Kenyan role in Africa on several levels and its nonpermanent membership in the Security Council as representative of Africa.”

The statement further indicated “Egypt's readiness to support development projects in Kenya in areas that constitute a priority for Kenya.”

The week before Shoukry’s visit to Nairobi, the Egyptian Foreign Ministry sent letters to UN Secretary-General Antonio Guterres and the UN Security Council explaining the dam issue and the various stages of negotiations.

In June 2020, UN member states elected Kenya to the Africa seat on the Security Council.

In September 2019, Kenya had asked for Egypt’s support in the membership vote during a visit to Cairo by Kenyan Foreign Minister Monica Juma.

Sudan also wants to talk further with Kenya about the dam. On April 26, Sudanese Foreign Minister Mariam al-Mahdi announced plans to visit Kenya to hold talks with the Kenyan president on Sudan’s position and vision regarding a solution to the dispute.

In February, Kenyatta received a letter from the head of the Sudanese Sovereignty Council, Abdel Fattah al-Burhan, explaining the Sudanese position on the dam.

Egypt has influence and presence in Kenya economically and commercially; there also is joint military cooperation between the two countries. Kenya is one of the larger African countries, and exports between Kenya and Egypt have been increasing in recent years. Egypt’s exports to Kenya were $348 million during 2019, according to a report by the Egyptian Central Agency for Public Mobilization and Statistics released in November 2020.

In January 2017, as part of Egypt's renewed outreach to Africa, Cairo granted Kenya $5.5 million within the framework of a cooperation agreement ratified by the Egyptian minister of irrigation, Mohamed Abdel Ati, during a visit to Nairobi. The agreement provides Egyptian support for implementing Kenya’s water resources management and development plan, which involves drilling 20 wells, building six dams and training Kenyan workers to carry out the projects.

In February 2017, Egyptian President Abdel Fattah al-Sisi visited Nairobi and met with Kenyatta, and in March 2020, during a phone call with Sisi, Kenyatta announced his country’s support for Egypt’s stance in the dam negotiations, according to an Egyptian presidency statement.

In October 2020, Kenyatta visited Cairo. During his meeting with his Kenyan counterpart, Sisi said Egypt “trusts Kenya’s ability to fully represent the African continent at the Security Council, as it is a voice that defends African issues.”

Sisi also stressed that the dam crisis "is a matter of national security, and thus Egypt clings to its water rights through reaching a legally binding agreement that sets out clear rules for the process of filling and operating the dam.”

Cooperation between Egypt and Kenya extends to the military level, as the Egyptian and Kenyan defense ministries reached an agreement in October 2019 to cooperate in the supply of military equipment and weapons between the two countries.

Hani Raslan, the head of the Nile Basin Studies Unit at Al-Ahram Center for Political and Strategic Studies in Cairo, said Egypt wants Kenya's support or at least for Kenya to play a neutral role when it comes to the dam. This is particularly the case because of Kenya's membership on the Security Council; the hope is that Kenya "would not hinder Egypt if it resorts to the Security Council.”

Raslan told Al-Monitor, “Egypt is taking advantage of the fact that Kenya suffered from damages to one of its lakes because of a dam set up by Ethiopia. Consequently, Kenya understands Egypt's complaint about damages” that can result from the Grand Ethiopian Renaissance Dam.

Reuters published a report in July 2020 saying fishermen in Kenya have been complaining about decreasing fish in Lake Turkana due to a huge dam built by Ethiopia on the Omo River, which feeds the lake.

Raslan said he thought the Grand Ethiopian Renaissance Dam also could have negative consequences for Kenya.