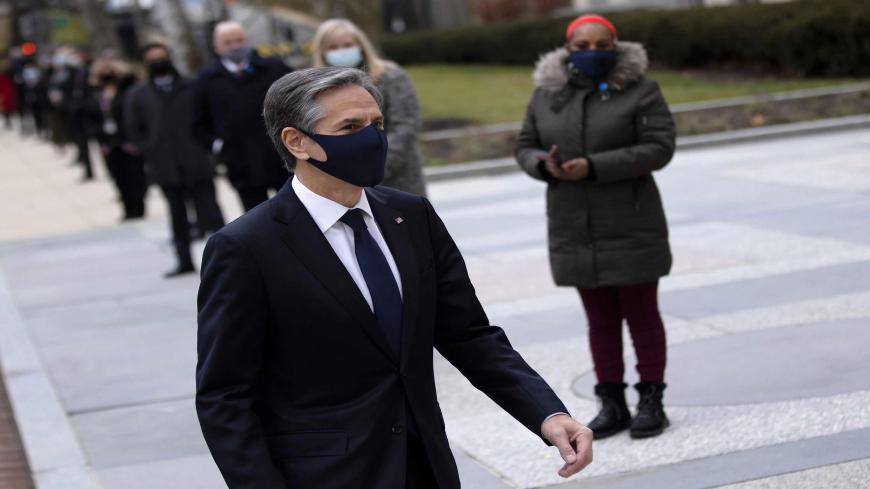 Newly confirmed US Secretary of State Antony Blinken arrives for a welcome ceremony at the State Department in Washington, Jan. 27, 2021. - Carlos Barria/POOL/AFP via Getty Images

US Secretary of State Antony Blinken affirmed in a phone call with his Turkish counterpart Mevlut Cavusoglu Feb. 15 that the United States believes that the outlawed Kurdistan Workers Party (PKK) is responsible for the deaths of 13 Turkish citizens who perished during a Turkish offensive against the militants in Iraqi Kurdistan that was launched Feb. 10.

The US State Department said in a readout of the call that Blinken “expressed condolences for the deaths of Turkish hostages in northern Iraq and affirmed our view that PKK terrorists bear responsibility.”

The statement appeared to walk back the State Department's statement from a day earlier that suggested the US government did not necessarily buy Turkey’s version of how the Turks being held by the PKK had died. “If the reports of the death of Turkish civilians at the hands of the PKK, a designated terrorist organization, are confirmed, we condemn this action in the strongest possible terms,” the Feb. 14 statement said.

The wording was interpreted by Ankara as lending credence to PKK claims that Turkish forces are to blame for the deaths, and prompted a fierce reaction from Turkish President Recep Tayyip Erdogan.

Speaking at a convention of his ruling Justice and Development Party in his native Rize province on the Black Sea, Erdogan accused the United States of siding with the PKK and its Syrian offshoot, the People’s Protection Units (YPG). “The US statement on the PKK’s execution of Turkish citizens in northern Iraq is ridiculous. They claim they do not support the PKK, but they certainly do.” Erdogan continued, “If you want to continue our alliance globally and within NATO, then you must stop siding with terrorists.”

The Turkish Foreign Ministry summoned US Ambassador to Turkey David Satterfield to register its protest.

Thirteen Turkish citizens were confirmed dead Feb. 14 and their bodies brought back to Turkey for autopsies and burial. Turkish Defense Minister Hulusi Akar said they were shot dead by PKK militants in a cave complex where they were being held in Iraqi Kurdistan’s mountainous Gara region.

Turkish special forces backed by US-made attack helicopters and fighter jets have been carrying out operations in Gara since Feb. 10.

Both Erdogan and Akar confirmed that the purpose of the operations was to rescue the hostages. “We kept trying to figure out how we can rescue our brothers from the hands of the terrorists. We tried very hard, but we failed,” Erdogan noted in his Rize address.

Top Turkish officials, including presidential adviser Ibrahim Kalin, initially described the victims as “civilians.” The government, however, identified its dead citizens as seven service members, two policemen and three civilians. One of the civilians has yet to be identified.

The deaths have triggered a wave of public fury. Much of the ire is directed at the PKK, which has been waging an armed campaign against the Turkish state since 1984. The group is designated as a terrorist organization by the United States and the European Union.

The pro-Kurdish Peoples’ Democratic Party (HDP), the third-largest party in parliament, has also come under fire for failing to condemn the PKK.

Erdogan and his far-right nationalist ally Devlet Bahceli accuse the HDP of being in league with the militants. Hundreds of HDP officials including former Co-chairman Selahattin Demirtas, numerous other former HDP lawmakers and popularly elected mayors remain behind bars on scantily evidenced charges of PKK membership.

On Feb. 15, Turkish authorities detained more than 700 people with alleged links to the PKK. They included HDP officials. The Interior Ministry said the suspects were detained in operations in 40 provinces. Their connection to the slaying of the hostages is unclear.

The question of why the Turkish army attacked the area where, by Akar’s own admission, the hostages were believed to be held remains unanswered. Erdogan said all would be explained during a special session of the parliament that is to be held this week.

What is known is that Turkish forces entered the cave complex on the fourth day of the operation after heavily bombing the area. That is when Turkish officials say they found the corpses. On Feb. 11, the PKK put out a statement saying that Turkish war planes were hitting the camp where the hostages were being held.

The HDP said the government ought to have used diplomacy rather than force to secure the hostages’ release. Ankara says it does not negotiate with terrorists. In 2014, however, it bargained with the Islamic State (IS) for the release of 49 hostages who were captured by the jihadis when they seized the Turkish Consulate in June 2014. It later emerged that Turkey had freed several IS prisoners in exchange.

It remains unclear how many Turkish nationals the PKK is still holding. They are believed to include two high-level operatives of Turkey’s National Intelligence Agency, MIT, who were nabbed in August 2017 in Iraqi Kurdistan’s Sulaimaniyah province.

Turkey’s Human Rights Association called on the PKK to free all the hostages in a Feb. 15 statement. It also called for an inquiry to be launched into the Turkish General Staff’s handling of the rescue mission. It said all documents including video footage from the scene of the slaughter should be handed over to prosecutors for assessment.

The Human Rights Association had been pressing for the hostages’ freedom but the PKK refused saying it would only negotiate their release with government officials. Kurdish politicians and rights groups have mediated the release of Turkish prisoners held by the PKK in the past.

The Human Rights Association’s president, Ozturk Turkdogan, said that both sides bore responsibility for the deaths. He said the government’s assertion that the hostages were shot dead by the PKK rests on the testimony of a PKK militant who was captured during the operation.

Turkdogan told Al-Monitor in a telephone interview that the father of one of the dead Turkish servicemen had told him that he had seen a bullet hole in the head of his son, Semih Ozbey, when he was summoned by the authorities to identify his body.

“We really don’t know what happened. Anything is possible, the militants might have panicked and shot the hostages dead, or they might have died during the aerial bombings,” Turkdogan said. “But the main point is not who killed them but rather why the Turkish military carried out this operation to bring the hostages back alive in a manner that led to their deaths.”