The Turkish president is expected to escalate military offensives in Syria, Iraq; Netanyahu will be his own Iran envoy; Al-Monitor reporting from Idlib and Gaza; and more. 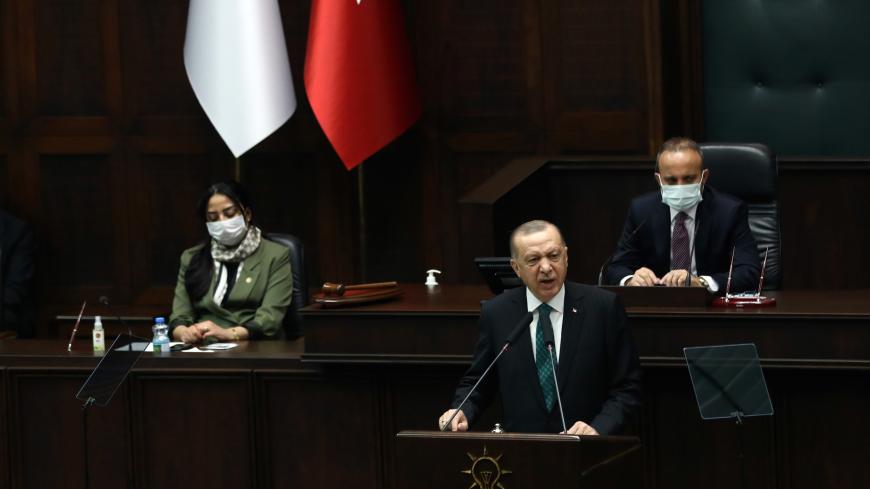 Turkish President and leader of the Justice and Development Party (AK Party) Recep Tayyip Erdogan speaks during his party's group meeting at the Turkish Grand National Assembly in Ankara on Feb. 10, 2021. - ADEM ALTAN/AFP via Getty Images

Turkish President Recep Tayyip Erdogan vowed to expand military operations against Kurdistan Workers Party (PKK) militants in Iraq and Syria after a local leader of the group reportedly ordered the execution of 13 Turkish hostages on Feb. 13. The PKK claims the hostages were killed in airstrikes by the Turkish military.

Background: The PKK, founded in 1984, is considered a terrorist organization by the United States, Turkey and the European Union. It maintains bases in the mountains of the Kurdistan Region of Iraq, on the Turkish border. The US-aligned Syrian Democratic Forces (SDF) include Syrian Kurdish groups linked to the PKK. The 13 hostages killed this week included Turkish soldiers, policemen, civilians and perhaps intelligence officials abducted between 2015-2017.

The Inside story: Turkey “hoped to hit two birds with one stone” with its combined military and rescue operations in Iraq’s Gara mountains that began on Feb. 10, according to this scoop from Metin Gurcan: The goal was to “rescue the captives and kill or capture top PKK commanders Murat Karayilan and Duran Kalkan, who were supposed to travel to Gara for a meeting in the same cave, according to human intelligence Ankara had obtained. The PKK, however, appeared to have gotten wind of the plan and the meeting was canceled at the last minute, well-placed sources told Al-Monitor. Still, the PKK in the area had no time to escape as the first stage of the operation began around 3 a.m. Feb. 10 with about 40 Turkish F-16 jets bombing the area, backed by armed and surveillance drones. It was at this point that the local PKK leader is believed to have executed the 13 captives.”

Not acting like allies: The killing will add pressure to already-strained relations between Turkey and the United States. At his confirmation hearing on Jan. 19, US Secretary of State Antony Blinken said Turkey is “not acting like an ally” and called Turkey’s purchase of the Russian S-400 missile defense system, which triggered US sanctions on Turkey, “unacceptable.”

‘Hey West!’ Erdogan slammed the initial US response to the PKK killing of the hostages as “ridiculous,” adding, “If you want to continue our alliance globally and within NATO, then you must stop siding with terrorists,” as Amberin Zaman reports. He was reacting to a Feb. 14 US statement that was cautious on culpability: “If the reports of the death of Turkish civilians at the hands of the PKK, a designated terrorist organization, are confirmed …,” it read. In a phone call with Turkish Foreign Minister Mevlut Cavusoglu the next day, Blinken dropped the “if” and placed blame squarely on “PKK terrorists”  for the murders. But even that was not quite enough for Erdogan. The next day, Erdogan responded. “Hey, West! Where are you? Why do not you raise your voice? Why do you remain silent? When something like this happens over there, you make a fuss. The July 15 incident took place, you remained silent. And now this incident happened, you still remain silent.”

CHP blames Erdogan: Kemal Kilicdaroglu, leader of Turkey’s main opposition Republican People’s Party (CHP), said Erdogan is “responsible for our 13 martyrs.” On Feb. 15, Erdogan jailed more than 700 members of the pro-Kurdish Peoples’ Democratic Party (HDP). “There is widespread speculation that Erdogan may now go along with the increasingly vocal demands of his far-right ally Devlet Bahceli to shut the HDP down in a bid to consolidate nationalist votes that have been shifting to the conservative IYI, or Good Party, writes Amberin Zaman.

Our take: The challenge for the Biden administration is whether this crisis can be channeled into an opportunity to address the seemingly irreconcilable differences with Turkey over the S-400s and the Syrian Kurds. Otherwise, the downward spiral in relations is likely to continue. Erdogan is making this a “with us or against us” moment. Defense Minister Hulusi Akar floated some form of quid pro quo on Turkish deployment of the S-400 if the United States would reevaluate its cooperation with Syrian Kurdish forces, as Diego Cupolo reported here — although the US appeared to rebuff Akar’s bid on the S-400s. Fehim Tastekin has the scoop here on how Turkey is pressing Baghdad and Erbil for a more expansive operation against the PKK in Iraqi Kurdistan and Sinjar. The SDF-aligned Kurdish forces are also in Erdogan’s sites, now more than ever.

Israel: Netanyahu will be his own Iran envoy

Israeli Prime Minister Benjamin Netanyahu’s appointment of national security adviser Meir Ben-Shabbat as Israel’s special envoy on the Iran nuclear issue is a sign that the prime minister will keep the Iran file close and likely be source of friction with the Biden administration.

“Netanyahu is not interested in another nuclear agreement,” writes Ben Caspit. “He is convinced Israel’s prospects of swaying the Americans on the matter are doomed and therefore does not attribute crucial importance to the identity of his envoy. As usual, he relies mostly on himself. He is apparently keen on restoring the Iran nuclear program to the top of the agenda ahead of the elections and formation of Israel’s next government and assuming the classic confrontational pose he adopted during the Obama administration.”

Read more: Ben Caspit and Rina Bassist have the scoop on Ben-Shabbat’s appointment.

Hayat Tahrir al-Sham (HTS), which has been tagged as a terrorist group by the United States and the UN Security Council for its links to al-Qaeda, has over the past year, possibly in coordination with Turkey, sought to portray itself as a more moderate, Islamist, Syrian nationalist opposition group, especially compared to more radical splinter groups such as Ansar Al-Tawhid. The group's leader, Abu Mohammed al-Golani, even recently appeared in a snappy blue blazer in an interview with PBS reporter Martin Smith. The question is whether HTS can rein in these new groups and what it means to their support in Idlib.

Khaled Al-Khateb has the story here from Idlib.

Mohammed Aliwa, 18, did not lose hope despite losing his right lower leg after being shot by Israeli snipers in 2018 while taking part in protests against Israel in Gaza. When he received his prosthesis, Aliwa began practicing parkour, a gymnastics-like activity aiming to overcome obstacles by moving, running, jumping and climbing from one point to another.

Check out the report (with video!) by Hana Salah.

In case you missed it: Gayle Lemmon discusses “Daughters of Kobani”

Gayle Tzemach Lemmon discusses her new book, “The Daughters of Kobani,” which tells the story of the women who fought on the front lines of the war against the Islamic State in Syria, in the latest “On the Middle East” podcast with Amberin Zaman. You can listen to it here.

The International Monetary Fund released a statement on its latest consultations in Iraq, concluding that “the economy is expected to gradually recover and the imbalances to narrow, although the outlook remains challenging. … Political constraints ahead of the parliamentary elections, renewed bouts of social unrest, or security risks could undermine the reform efforts, putting macroeconomic stability at risk.” You can read the report here.