Secretary of State Antony Blinken met virtually with his European counterparts as the United States seeks to revive diplomacy with Iran. 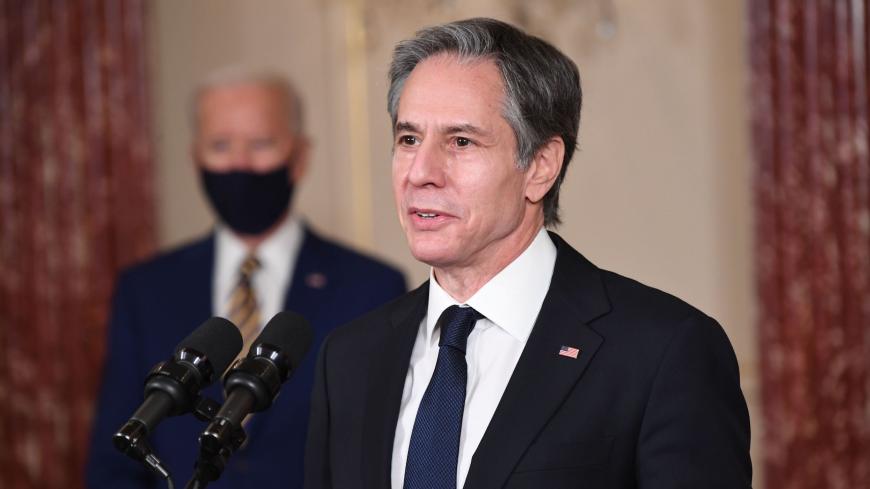 US Secretary of State Antony Blinken speaks to staff at the US State Department during the first visit of US President Joe Biden(L) in Washington, DC, Feb. 4, 2021.

Secretary of State Antony Blinken is meeting with European allies Thursday to discuss ways to revive the Iranian nuclear agreement abandoned by the United States in 2018.

The foreign ministers of the E3 — Germany, the United Kingdom and France — met in Paris on Thursday, with Blinken participating virtually. Their meeting comes as Iran prepares to limit snap inspections by the UN’s International Atomic Energy Agency (IAEA) if sanctions aren’t lifted by next week.

German Foreign Minister Heiko Maas warned Thursday that talks “are being significantly complicated at the moment because Iran obviously does not seek de-escalation but escalation — and this is playing with fire.”

“The more pressure is applied, the more difficult it gets to find a political solution,” Maas said.

Iran has steadily breached its obligations under the nuclear agreement since President Donald Trump abandoned the deal, known as the Joint Comprehensive Plan of Action (JCPOA), and reimposed harsh sanctions in 2018. Blinken said recently that public reports indicate Iran’s “breakout time” — the time it would take to amass the amount of fissile material needed to build a nuclear weapon — has been reduced to a few months. He warned that figure could drop to “a matter of weeks” if Iran continues lifting nuclear restraints in violation of the JCPOA.

“The good news, of course, is that all of these steps are reversible and the path for diplomacy remains open,” State Department spokesperson Ned Price said Wednesday, adding, “Iran should provide full and timely cooperation with the IAEA.”

If Iran returns to “strict” compliance, President Joe Biden has pledged to rejoin the landmark deal as a starting point for follow-on negotiations to address Iran’s ballistic missile program and regional activities. The Biden administration has pledged to consult with allies and partners before making any moves to reenter the multilateral agreement.

But Tehran and Washington have reached an impasse, with each side insisting the other make the first move. Iran’s leaders say they will only roll back their nuclear breaches if the United States lifts sanctions, which the Biden administration has repeatedly ruled out.

On Wednesday, German Chancellor Angela Merkel expressed her “concern” with Iran’s JCPOA violations in a call with Iranian President Hassan Rouhani, her office said. Merkel also said that "now was the time for positive signals that create trust and increase the chances of a diplomatic solution.”