US diplomat criticizes Russia, Turkey, UAE for intervening in Libya

The comments at UN meeting continue the Biden administration's criticism of Turkish policy in the region. 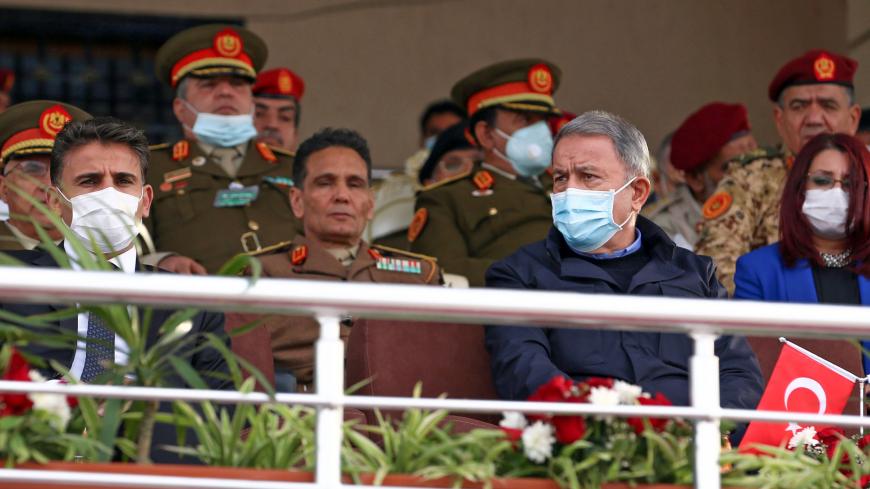 Turkish Defense Minister Hulusi Akar (R) and his Libyan counterpart Salah Eddine Namrouchin (L), both wearing masks due to the COVID-19 pandemic, attend a graduation ceremony for new batches of students from the Military College in the Libyan capital, Tripoli, on Dec. 26, 2020. Akar made a surprise trip to Libya on Dec. 26, two days after strongman Khalifa Hifter urged his fighters to drive out Turkish forces from the oil-rich country. - AFP via Getty Images

A leading US diplomat slammed Turkish, Russian and Emirati policy in Libya on Thursday at the United Nations.

Richard Mills, the head of the US mission to the UN, said the three states should stop interfering in Libya.

“We call on all external parties, to include Russia, Turkey, and the UAE, to respect Libyan sovereignty and immediately cease all military intervention in Libya,” said Mills, according to a transcript from the US Mission to the United Nations.

Mills spoke at a UN Security Council briefing on Libya. The US representative at such events is usually the US ambassador to the United Nations. However, US President Joe Biden’s nominee, Linda Thomas-Greenfield, has yet to be confirmed in the Senate.

Libya is embroiled in a civil war between the UN-recognized Government of National Accord and the eastern-based Libyan National Army. The United States recognizes the Government of National Accord and Turkey heavily supports it militarily. Russia and the United Arab Emirates back the Libyan National Army and its leader, Gen. Khalifa Hifter. Turkey has sent military forces to the country, and Russian mercenaries are known to be operating there at the least.

Mills reiterated the US position in support of the October cease-fire in Libya, but said outside powers were undermining it. "The external actors who have militarily intervened in this conflict have wholly, completely, ignored Libyan demands,” said Mills.

That cease-fire set a three-month deadline for foreign troops to leave Libya; the deadline passed Jan. 23.

“We call on Turkey and Russia to immediately initiate the withdrawal of their forces from the country and the removal of the foreign mercenaries and military proxies that they have recruited, financed, deployed, and supported in Libya,” Mills added.

The statements are similar to those of the previous administration. Mike Pompeo, the Secretary of State under former President Donald Trump, said in May that the United States opposed weapons transfers to Libya. In December, he accused Russia of “sowing chaos” in the country. The same month, he criticized Turkey for sending Syrian rebel forces to fight in Libya.

Pompeo’s rebuke of Turkey’s Libya policy came late in the Trump presidency, however, and was related to the administration’s opposition to Turkey purchasing the Russian S-400 missile defense system.

The Trump administration also did not rebuke its ally UAE’s foreign policy in Libya, while Mills named Abu Dhabi explicitly at the meeting.