Female representatives of Turkey's ruling party have been a useful tool to expand patriarchal policies. 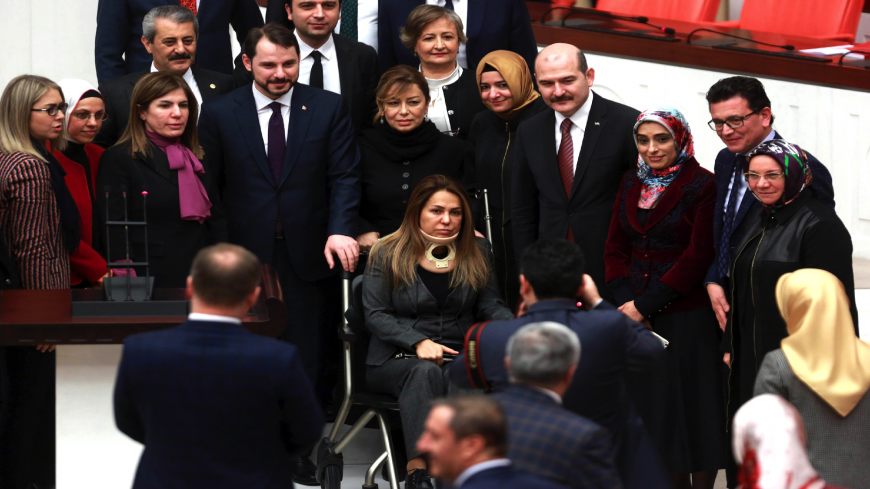 Turkey's ruling Justice and Development Party legislators, including Gokcen Ozdogan Enc, in a wheelchair, one of the three female lawmakers who were hospitalized after a brawl between supporters and critics of a constitutional reform bill boosting the powers of the president that broke out in parliament late Jan. 19, 2017. - ADEM ALTAN/AFP via Getty Images

People in Turkey are routinely strip searched while being taken into custody over a tweet, visiting family members in prison or simply because they were in the wrong place at the wrong time, such as in a dormitory. This is a humiliating experience, a form of sexual harassment that usually creates too much embarrassment for survivors to speak out in public. Strip searches have increased since the 2013 Gezi protests, and parliament has been made aware of the issue multiple times. In 2018, for example, the Ministry of Justice answered the allegations of strip searches, saying, “We didn’t conduct a search. They (those in custody) stripped naked on their own.”

Over the last couple of weeks, Turkish social media has been rocked by hundreds of women speaking out on video about their own experiences with strip searches. Most of these women are hijabis. Indeed, Omer Faruk Gergerlioglu, a lawmaker from the pro-Kurdish People’s Democratic Party (HDP), brought the matter to the public eye in mid-September after thirty college students were taken into custody in Usak province and strip searched.

Not many people seemed to care until these women organized and spoke in front of cameras about their and their children’s horrifying experiences.

In response to Gergerlioglu’s statement, Ozlem Zengin, a lawmaker from the ruling Justice and Development Party (AKP), said, “I have not seen any other lawmaker who terrorizes the parliament [as much as Gergerlioglu does].” When asked to elaborate on what she meant, Zengin said “Whenever [Gergerlioglu] speaks in parliament, he always talks about his own agenda. I do not believe there are strip searches in Turkey. It doesn’t happen.”

“And the women he talks about are pious Muslim women. Can we allow such treatment of them? My whole life is dedicated to the women’s movement. Can we tolerate one woman to be treated like this?” she added.

Zengin’s blatant denial is embedded in her emphasis on "pious" women. She refers to the fact that these women are hijabis, and the treatment of such women cannot be permitted. Zengin's sentence insinuates that all women are not equal before the law or in the eyes of law enforcement. She and other AKP figures frequently remind the public about the grievances of the headscarf ban and divide the society further as “us” (Islamists) and others. Any criticism about their income and spending is promptly shielded with the defense that these women are pious.

Women’s rights have significantly regressed in Turkey over the last two decades. We have to ask: What have the women in power — AKP’s female representatives — done about this?

Ayse Acar Basaran, an HDP deputy and spokesperson for the party’s Women's Council, told Al-Monitor, “Just being a woman, as a biological attribute, is not sufficient; the mentality about female consciousness is crucial. We need more women who are willing to be involved in the women’s movement. For example, during the budget talks at the parliament recently, I said, ‘This is a male-minded budget that ignores female identity,’ and I got opposition from other [female] deputies. It is not easy to be involved in politics. Women, if they are organized independently, can act and lead as women politicians.”

We observe Basaran’s comments frequently in Turkish politics, where female politicians in the AKP and its ultra nationalist ally Nationalist Movement Party are either invisible or in denial about women’s problems. From time to time, when there is public outrage about a women’s brutal murder, female politicians come out and express their condolences.

Eren Keskin, vice president of Turkey’s Human Rights Association and a prominent attorney, told Al-Monitor, “Since 1997, we have had 758 women asking for our help as survivors of sexual attacks. Perpetrators generally are soldiers, police and other men in uniform. None have been punished. Some cases have been taken to the ECHR and found justice there.” For each case about sexual and physical violence against women, all we hear from the AKP’s female politicians is that “they will follow the case closely.”

The AKP has 54 female lawmakers (the AKP's total share out of the 584-deputy parliament is 289); six of them have never spoken or sought to introduce a bill to the floor.

The AKP’s female deputies frequently make statements that raise eyebrows. In 2016, Sema Ramazanoglu, then family minister, held a press conference to answer questions about sexual harassment cases involving 45 minors at Ensar Schools, a religious endowment. Her statements seemed more concerned about the reputation of the endowment than the accusations. Referring to the rape incidents, she uttered, “[If it happens] only once, it should not mean anything.”

Huda Kaya, another HDP deputy, told Al-Monitor, “Patriarchy is a mindset. Despotism, arrogance really does not have a gender. A man or woman with this mindset can reflect the scariest forms of fanaticism. There are women in all aspects of life that fail to fight against patriarchy because it has permeated society like a poison.”

Remziye Tosun, an HDP lawmaker, complemented Kaya’s statement as she told Al-Monitor, “Women have to be organized. The Kurdish women’s movement is targeted because they know we have solidarity to support each other. It is not just the freedom of expression, but that of assembly and association is crucial to battle against patriarchy.”

Every women's day march or another women's protest against violence is met with police brutality. The AKP’s female deputies never join these marches or acknowledge women’s suffering.

The AKP was carried on the shoulders of women in the early 2000s when they campaigned vigorously door to door. However, women’s rights for AKP’s female elites — either in government or in nongovernmental organizations such as the Women and Democracy Association (KADEM) — have been stuck on the issue of headscarves. The right to wear a headscarf as a public employee has been one of the AKP’s major accomplishments, which could not have been possible without the achievements of the feminist movement in Turkey. Since then, however, it has become a shield to silence all criticism.

Ayse Cavdar, anthropologist and journalist, told Al-Monitor, “[The] AKP’s hijabi representatives try to justify all the wrong actions of the government today with their battle for the right to wear the headscarf. This behavior pattern jeopardizes not only the legitimacy of the political power they hold today, but also their own histories — of those battles for freedom of religion (which includes not only of worship, practice and teaching, but also that of dress codes), human rights and women’s rights. This leaves a bitter legacy for the future."