Basketball star Hidayet Turkoglu has denied quitting the top post of the Turkish Basketball Federation and his firing as an adviser to the Turkish president for refusing to move his money to Turkey. 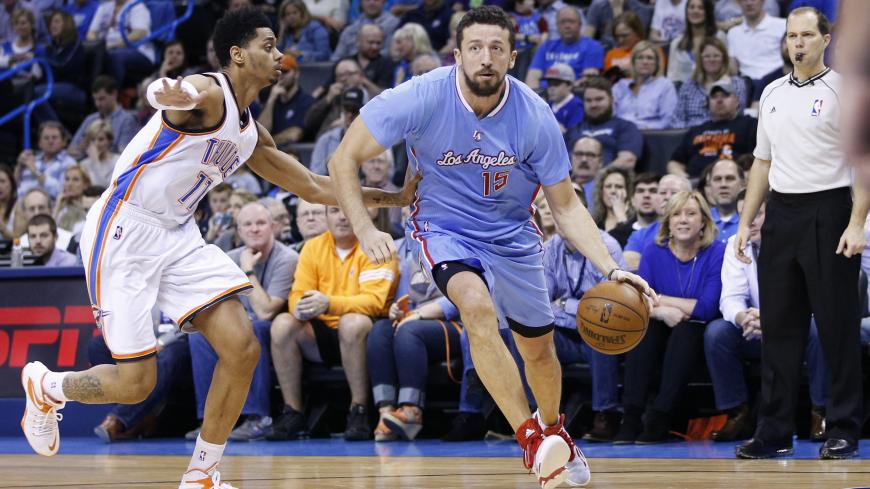 Hidayet Turkoglu of the Los Angeles Clippers handles the ball against Jeremy Lamb of the Oklahoma City Thunder during a game at Chesapeake Energy Arena on Feb. 8, 2015, in Oklahoma City, Oklahoma. - Joe Robbins/Getty Images

Former NBA star Hidayet Turkoglu has denied media reports that he is stepping down as the head of the Turkish Basketball Federation and was fired from his job as an adviser to President Recep Tayyip Erdogan for refusing to move his fortune from the United States to Turkey.

Turkoglu responded to the claims via Twitter, saying he would continue in his twin roles as a chief adviser to Erdogan — one he was exercising “with great pride” — and as federation head. Turkoglu blamed the rumors on putative rivals seeking to dethrone him in upcoming federation elections.

The opposition daily Cumhuriyet, citing sources close to Erdogan, claimed pressure on Turkoglu to transfer his alleged 150 million-euro fortune to Turkey had come from the Turkish leader himself. When Turkoglu declined to comply, he got the boot and was getting ready to move back to the United States.

Turkey remains in the grip of a massive foreign currency crunch after flooding the markets with more than $150 billion over the past two years. The ill-conceived policy to boost the value of the Turkish lira not only failed but cost Erdogan’s former finance minister and son-in-law Berat Albayrak his job.

It is at once a measure of the extent of Turkey’s economic woes and of the Turkish leader’s demand for absolute loyalty that the story was regarded as credible and was a top trend on Turkish Twitter for much of the day.

The ethnic Bosnian forward, who played for six NBA teams during his 15-season career (among them the San Antonio Spurs, Orlando Magic and Los Angeles Clippers), is among a circle of sports personalities who are staunch defenders of the Turkish president, including German Turkish soccer star Mesut Ozil. The midfielder for the UK’s premier league Arsenal drew sharp criticism in 2018 after striking friendly poses with Erdogan during a public event in London. He resigned from the German national team soon after, citing “racist” reactions to his appearance with the Turkish leader, who also used to play professionally in a minor Istanbul league.

But there are other globally acclaimed Turkish sports celebrities batting for the opposite team. Enes Kanter of the Portland Trail Blazers is an overt disciple of Fethullah Gulen, the Pennsylvania-based Sunni preacher who is accused of masterminding the failed 2016 coup to violently overthrow Erdogan. Gulen denies the charges, though there is visual evidence, among other incriminating details, showing several of his associates at the Ankara airbase on the night the putsch unfolded. The United States has thus far spurned demands for his extradition on the grounds that the evidence presented by Ankara against him is insufficient to warrant such action.

Kanter and former Turkish national soccer squad captain Hakan Sukur, a fellow Gulen devotee who also resides in the United States, are also formally wanted by Turkey. Their Turkish citizenship has been revoked.

Sukur, who was elected to parliament in 2011 from Erdogan’s Justice and Development Party, told a German newspaper last year that Erdogan had “taken everything” from him, seizing all his assets on the grounds that he had supported the coup financially. He now drives for Uber and sells books to make ends meet.

Kanter urged the incoming Joe Biden administration in a Jan. 12 op-ed for the Wall Street Journal “to help the Turkish people restore their democracy” and asserted that “slapping sanctions on Turkey for buying Russia’s S-400 missile system is a good to start to wean Turkey away from Russia.” Kanter went as far as to suggest that the United States should help accelerate Turkey’s financial meltdown in order to expedite Erdogan’s political demise.

Unsurprisingly, Kanter and Turkoglu are not on good terms and do not disguise their mutual dislike. Kanter has called Turkoglu a “lapdog” who was being financially rewarded for his sycophancy. Turkoglu has in turn accused Kanter of mounting a "smear campaign” against his native country by falsely portraying himself as a victim. “He is trying to get the limelight with irrational justification and political remarks,” Turkoglu charged.