The former player for Maccabi Tel Aviv could become the first international basketball star to come out of Israel. 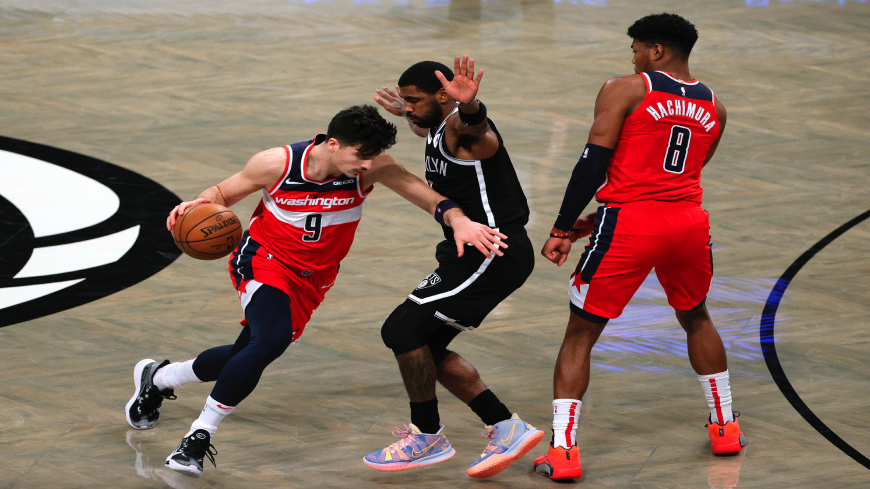 Deni Avdija (#9) of the Washington Wizards dribbles against Kyrie Irving (#11) of the Brooklyn Nets during the first half at Barclays Center on Dec. 13, 2020, in the Brooklyn borough of New York City. - Sarah Stier/Getty Images

A potential star Israeli basketball player will make his debut in the National Basketball Association (NBA) tonight. Deni Avdija’s career has been heavily covered in Israeli media, and some think he could be the country’s first international basketball superstar.

Avdija and the Washington Wizards will face the Philadelphia 76ers on the road to open their NBA season.

Avdija previously played for Maccabi Tel Aviv in the Israeli Basketball Premier League. He was a sought-after pick in this year’s NBA draft, going ninth overall to the Wizards. The 19-year-old small forward was born in Israel to a Jewish Israeli mother and a Muslim Serbian father. His mother was a track and field athlete, and his father, Zufer, came to Israel to play professional basketball.

A handful of Israelis have played in the NBA. Omri Casspi was first and spent several years in the league before returning to Israel last year.

The Wizards rookie is perhaps the most anticipated Israeli to play in the elite basketball league, though. Avdija is the highest-ever drafted player from Israel. The head of public diplomacy for Israel’s embassy in Washington, Tammy Ben-Haim, tweeted “good luck” to Avidja ahead of his game and said the embassy will be rooting for him. Israeli media outlets heavily covered his journey from the Israeli league to the NBA draft, as well his NBA pre-season performance. An Israeli basketball source told the US sports news outlet Bleacher Report that Israel “never had a talent like him” in 2019.

The Washington Wizards also started a Hebrew-language Twitter account focused on Avdija after drafting him in November.

The United States is still dominant in international basketball, but the sport is reaching new popularity levels worldwide, including in the Middle East. There are also basketball leagues with televised games in Jordan, Lebanon and other countries in the region. Turkey in particular has a strong basketball culture and has produced NBA stars like Enes Kanter.

The Israeli Basketball Premier League already made its mark in the NBA when American David Blatt, formerly Maccabi Tel Aviv’s coach, led LeBron James and the Cleveland Cavaliers to the NBA Finals in 2015.