Turkey draws road map with Egypt, but will Cairo follow it?

Turkey is once again hinting at openness for dialogue with Egypt, but real progress remains elusive. 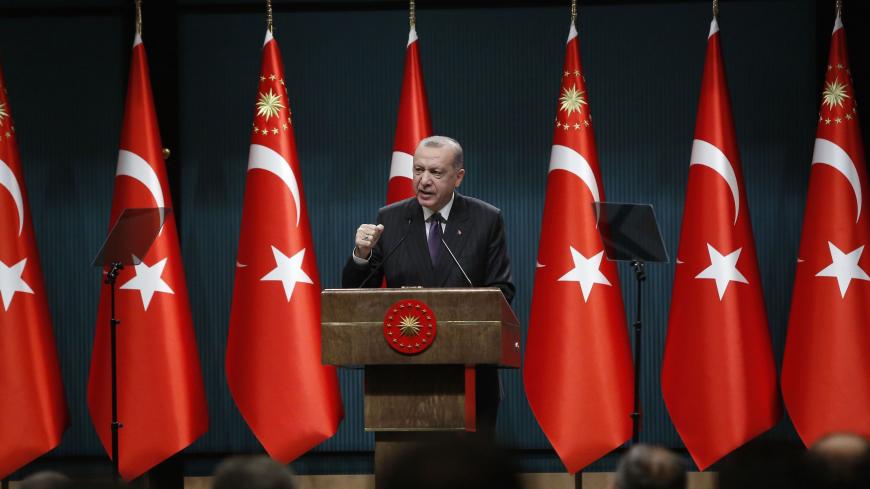 President of Turkey Recep Tayyip Erdogan makes a statement after chairing the cabinet meeting in Ankara on Dec. 14, 2020. - ADEM ALTAN/AFP via Getty Images

CAIRO — Once again, Turkey is reaching out to Egypt for political rapprochement. Turkish Minister of Foreign Affairs Mevlut Cavusoglu told reporters Dec. 30 that Turkey and Egypt are working on shaping a road map for their bilateral relations.

He added that the Turkish and Egyptian intelligence and foreign ministries have been in touch to promote their relations according to the principle of non-conflict in international forums.

Cavusoglu’s statement comes a few months after Turkish President Recep Tayyip Erdogan expressed Turkey’s desire to open dialogue with Egypt in September. Erdogan said in statements to the media, “We have no problem having dialogue with Egypt. Intelligence talks with Egypt are different and possible, and nothing is standing in the way.”

Egypt has not officially commented on Cavusoglu’s statements, but an Egyptian diplomatic source told Al-Monitor on condition of anonymity, “Cairo is waiting for actual actions, rather than mere media statements. Actions should be aligned with words.”

Political analysts and observers in Egypt who spoke to Al-Monitor believe the repeated statements from Turkey about calls to hold a dialogue with Egypt aim at coordinating on two main issues: the Libyan crisis and the gas issue in the Eastern Mediterranean.

Professor of political sciences at the American University of Cairo Tarek Fahmi told Al-Monitor over the phone, “Cavusoglu's statements regarding relations with Egypt do not say anything new, and Erdogan has already made similar statements, as did his adviser Yassine Aktay, among other officials. The aim is to engage in political dialogue with Egypt regarding Libya and the Eastern Mediterranean.”

He added, “Through their dialogue with Cairo, Turks want to reach understandings related to the gas issue in the Eastern Mediterranean, as they felt they were excluded from the dossier when Egypt established the EastMed Gas Forum. They also realized Egypt is taking large strides in the region through various ties and military cooperation with France, Greece, Cyprus, the United Arab Emirates and Russia later on.”

Cavusoglu’s statements regarding ties with Egypt followed the meeting of a high-ranking Egyptian delegation with Libyan officials from the Government of National Accord (GNA) Dec. 27 in the first visit to Tripoli in six years.

Spokesperson for the Libyan Ministry of Foreign Affairs Mohammed al-Kabalawi tweeted Dec. 27, “The Egyptian delegation promised the Libyans to reoperate the Egyptian embassy in Tripoli soon.”

The Egyptian delegation’s visit to Tripoli was preceded by a similar visit by Turkish Minister of Defense Hulusi Akar a few hours earlier. Speaking before Turkish forces in Tripoli, Akar warned leader of the self-styled Libyan National Army Khalifa Hifter and his supporters of the consequences of any attempt to target Turkish forces in Libya.

Fahmi said that the goal behind the repeated Turkish statements regarding ties with Egypt is to “convey positive messages to Egypt that Turkey is changing and wants to launch a direct dialogue with Egypt.”

“It is too soon to talk about Egypt’s interaction with the latest Turkish statements. Nothing has changed, and Turkey’s media and political provocation against Egypt is ongoing,” he added.

“Turkey must change its behavior in the region and refrain from meddling in the affairs of Arab states. It should stop its military sprawl in western Libya and stop sending mercenaries from Syria to Tripoli. There are Egyptian concerns about the Turkish presence in western Libya, and this pushed [Egyptian President Abdul Fattah] al-Sisi to coordinate with the Algerian president recently,” he explained.

In a Dec. 31 phone call, Sisi and his Algerian counterpart, Abdul Majid Tebboune, discussed the Libyan crisis and agreed to intensify joint coordination in the coming phase between the two countries to restore the stability and security of the neighboring country.

Egypt has recently made progress in restoring other strained relations. Foreign Minister Sameh Shoukry attended the Gulf Cooperation Council summit in Saudi Arabia Jan. 5, and signed onto a reconciliation agreement aimed at ending the three and a half year diplomatic rift between Qatar on the one hand and Egypt, Saudi Arabia, the UAE and Bahrain on the other.

Former adviser to the Egyptian foreign minister Hussein Hreidi told Al-Monitor, “Since September, the Turkish government has been occasionally making such statements that welcome the restoration of ties with Egypt, but there hasn’t been any actual impact on the ground. The Turkish policies toward us have not changed.”

He added, “We did not notice any changes in Turkish behavior. I think the statements are just a way to break up the Egyptian alliance with Greece, Cyprus, the UAE, Jordan and Palestine in the Eastern Mediterranean and to send a message to the new US administration led by [Joe] Biden of Turkey’s desire for openness to Washington’s partners in the region.”

Despite the political dispute between Ankara and Cairo, their economic cooperation never stopped. A report by the General Organization for Export and Import Control in Egypt (governmental) revealed in early 2020 that the volume of Egyptian exports to Turkey increased by 9.7% in 2018 to reach $2.2 billion, compared to $1.9 billion in 2017.

“Strengthening the economic relations and shielding them from negative repercussions of political disagreements is important. Besides, the private sectors in Turkey and Egypt are working in the framework of the market economy, and political changes do not affect them,” Hreidi said.

Hreidi added, “Let us wait to see what this road map that Turkey talked about is, what its main elements are, and how serious Turkey is about implementing it.”