Egyptian Foreign Minister Sameh Shoukry laid down several conditions that would serve as a basis for normalizing ties with Turkey, in light of the recent attempts at rapprochement between the two countries. 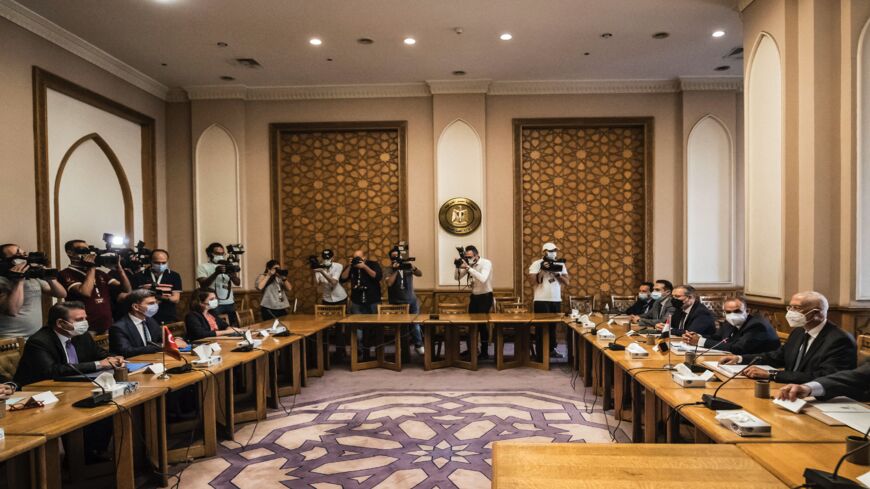 CAIRO — In light of the recent attempts at rapprochement between Cairo and Ankara, Egyptian Foreign Minister Sameh Shoukry listed some conditions for restoring normal relations between the two countries during an interview with TeN TV on May 18. “These items are requirements that Egypt has always put forward, which are taking into account the nature of international relations based on respecting privacy, not interfering in internal affairs and not sponsoring any extremists opposing the state,” he said.

Shoukry added, “There are signs of Turkey's desire to change its approach toward Egypt, and these signs have raised the level of communication to the political level leading exploratory consultations. [These consultations] came as an attempt to put forward Egypt's expectations to manage this relationship [with Turkey] in the coming period, as well as [manage] its policy to achieve stability in the region.”

Shoukry further noted, “What we expect is for Turkey to modify the course of [its] politics so that it does not intersect with Egyptian interests, especially when it comes to Egyptian national security, and this falls within the framework of taking practical steps that can be monitored and evaluated. There will be other exploratory rounds that will lead to normalization once we are assured that the Egyptian interests are fully taken into account.”

On May 6, the Egyptian Ministry of Foreign Affairs announced the conclusion of exploratory talks between the Egyptian and Turkish delegations headed by Egyptian Deputy Foreign Minister Hamdi Sanad Loza and Turkish Deputy Foreign Minister Sedat Onal. The two-day talks in Cairo dealt with bilateral and regional issues, especially the situation in Libya, Syria and Iraq. The delegations also discussed the need to achieve peace and security in the Eastern Mediterranean region, which the two countries described as necessary steps that may lead to the normalization of relations at the bilateral level and in the regional context.

Thus, it seems a possible improvement in relations between Egypt and Turkey is on the horizon, especially after the exploratory round of consultations that followed friendly press statements toward Egypt by Turkish officials.

However, significant tension had plagued the Egyptian-Turkish relations at the political level since the Egyptian army dismissed former President Mohammed Morsi, who is affiliated with the Muslim Brotherhood, in 2013. Turkish President Recep Tayyip Erdogan described the ouster at the time as a military coup and welcomed fleeing Brotherhood members. The dispute escalated as Egypt condemned Turkish violations in the Eastern Mediterranean basin, where Turkey transports gas near the borders of Greece and Cyprus (riparian states with Egypt). Cairo had also criticized the presence of Turkish forces supporting armed militias on Libyan territory (bordering Egypt from the west).

In this context, Tarek Fahmy, a professor of politics at Cairo University, told Al-Monitor that Shoukry’s talk about restoring relations with Turkey is considered the first Egyptian statement concerning the recent talks that were held with the Turkish side, while the upcoming round of meetings is yet to be announced.

Speaking about what Egypt expects from Turkey, he said, “The matter is not only related to stopping the activity of media platforms that adopt an anti-Egyptian discourse, but it comes within other important requests such as respecting Egyptian sovereignty and reaching a compatible view over some regional issues such as the situation in the Eastern Mediterranean and Libya.”

Fahmy explained that Egypt is drafting a general framework for relations between Cairo and Ankara, which can be described as a comprehensive deal that includes several items that need to be respected in full.

He expected Turkey to meet the Egyptian requirements, but only gradually, after the consultations take their natural course in due time because Ankara realizes Cairo’s importance in the region as they have common interests and there is no way to achieve them except with good relations.

Fahmy noted that this is particularly true in light of Turkey’s desire to join the Eastern Mediterranean Gas Forum, which includes countries such as Greece, Cyprus and Israel; thus, it would not only be improving bilateral relations with Egypt alone.

He further stressed the need for Turkey to adopt an approach based on preventing problems between the two countries, and if Egypt is convinced of it, it will deal with it accordingly. He expects more steps on the ground in the coming period, either by resuming bilateral consultations in Cairo or with a visit by an Egyptian delegation to Ankara.

Fahmy’s expectations go in line with Shoukry’s statements during the meeting of the parliament’s Foreign Relations Committee on March 14. At the time, Shoukry stressed that Egypt expects Turkey to act on its words and take actions proving the change in Turkish policy, approach and objectives toward Egypt.

For his part, Ayman Samir, a professor of international relations at Cairo University, told Al-Monitor that Egypt adopts the principle of “step by step” in its relationship with Turkey, meaning that when Turkey makes a positive move, Egypt reciprocates. He noted that Egypt is off to a good start since it continued to respect the trade agreement it signed with Turkey on Dec. 27, 2005, despite the tense relations.

He added that according to Shoukry’s conditions, Cairo expects Ankara to end all manifestations of political action that is taking place from Turkish territory against the Egyptian state, and not only in terms of hostile media platforms, but also ending all other activities that are managed by political entities there.

Besides, Samir noted, Egypt wants Turkey to recognize that its presence in Libya is illegal and that it is only recognized in virtue of the military cooperation agreement signed between Turkey and the Tripoli-based Libyan government on Nov. 27, 2019, especially since Egypt supports the withdrawal of foreign forces and mercenaries from Libyan territory.

“Turkey must adopt a political approach that does not conflict with Egyptian interests in the Arab region, such as stopping Turkish interference in Syria and Iraq, for example, as well as the need to improve its relationship with both Saudi Arabia and the UAE, which have direct regional interests with Egypt,” Samir said.