Egypt, Jordan, Israel, Cyprus, Greece and Italy signed the charter to transform the EastMed Gas Forum into a regional organization based in Cairo, in an attempt to form an international lobby capable of confronting Turkish ambitions in the eastern Mediterranean. 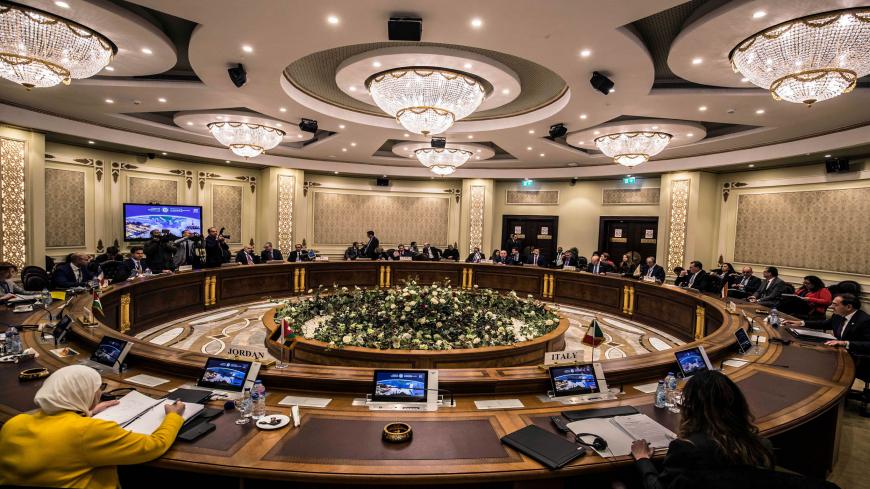 CAIRO — Egyptian Minister of Petroleum and Mineral Resources Tarek el-Mulla and the ministers of the Eastern Mediterranean Gas Forum — which includes Egypt, Jordan, Israel, Cyprus, Greece, Italy, as well as the Palestinian Authority — signed Sept. 22 the charter to transform the forum into a regional organization based in Cairo, with the aim of formulating a common vision on natural gas policies in the region, and confronting any projects that are contrary to the objectives of the organization or conflict with the interests of its members.

Mulla said during the signing ceremony that the forum has officially become a large intergovernmental organization in the Mediterranean region, which gives it an institutional dimension in confronting the challenges facing the region.

This Egyptian move is an attempt to form an international lobby capable of confronting the Turkish actions in the eastern Mediterranean, and stopping what Cairo described as the “violation” of its economic rights and attacks in the Mediterranean by Turkey.

On the same day, Ankara immediately responded by saying that transforming the forum into an international organization is a new “unilateral” step, seeking “unilateral action away from Ankara, which has always demanded the necessity of achieving equitable sharing of natural resources in the eastern Mediterranean region.”

Brig. Gen. Samir Ragheb, head of the Arab Foundation for Development and Strategic Studies, told Al-Monitor that transforming the forum into a regional organization will change the balance of power in the eastern Mediterranean and block the way for Turkey's desperate attempts to control the region's natural resources.

Ragheb expects more cooperation between the member states of the organization in the coming period, not only at the political level in terms of dealing with the gas wealth and determining the maritime borders of each country, but at the military level as well, through conducting naval exercises in the eastern Mediterranean, enabling them to confront any attempt to create chaos in the region. He added that the task of the organization will be to secure the gas wealth in the region.

He believes the presence of observers from the European Union gives the organization more strength and makes it a major regional pressure tool, as before it was only a platform for discussions and exchange of views.

On Jan. 14, Egypt announced the establishment of the EastMed Gas Forum, with the participation of the aforementioned seven countries, with the aim to exchange expertise on the natural gas exploitation in the eastern Mediterranean basin. Egypt said back then that the forum would be transformed into an international organization that respects the rights of the member states in their own natural resources based on international law.

Ragheb stressed that Turkish President Recep Tayyip Erdogan will have to reconsider his action after he was marginalized, especially since Turkey has expressed a lot of its discontent at not participating in this entity.

On Jan. 17, Hami Aksoy, spokesman for the Turkish Ministry of Foreign Affairs, said in a statement that Egypt's efforts to transform the EastMed Gas Forum into an international organization cannot work in reality, and that this forum was mainly driven by political motives to get Turkey out of the energy equation in the eastern Mediterranean, claiming this is why Turkey and the Turkish Republic of Northern Cyprus were never invited to participate.

Aksoy stressed that any initiative that takes place in the eastern Mediterranean without the presence of Turkey and Turkish Cyprus will not succeed, and that Ankara will persistently continue to protect its rights and interests in the Mediterranean.

Ragheb said that Erdogan has sought throughout the past period to get closer to Egypt, in an attempt to sow discord between the countries of the eastern Mediterranean basin, to avoid forming an alliance against him. Prior to that, Erdogan would constantly attack the Egyptian regime, accusing it of a coup, since the revolution of June 30, 2013, which toppled the Muslim Brotherhood. However, Egypt did not respond to any calls for rapprochement or reconciliation, which puts Erdogan in a weak position.

On Jan. 13, Yasin Aktay, chief adviser to Erdogan, called for the need to sit down with Egypt and cooperate with each other. “The cooperation and solidarity of the two countries are inevitable, and they must do that sooner or later,” he said.

On June 11, Turkish Foreign Minister Mevlut Cavusoglu told Turkey’s NTV channel that the most rational way to restore Turkish-Egyptian relations would be through dialogue and cooperation with Turkey instead of ignoring it.

In a Sept. 12 interview with Arabi21, Aktay stressed the need for communication between Egypt and Turkey, regardless of any existing political differences. “The Egyptian army is a great one, and we respect it very much because it is the army of our brothers,” he said, noting that there is no way this army would wage a war against Turkey.

In response to the Turkish calls for rapprochement, Egyptian Minister of Foreign Affairs Sameh Shoukry said in a Sept. 13 statement that Egypt is focusing on actions and not media statements. He noted that if such statements do not go hand in hand with the Turkish policies, then they do not mean anything, especially in light of the policies employed in Syrian, Iraqi and Libyan territories, in addition to the tension in the eastern Mediterranean; all convey policies aimed at destabilizing the region.

In this vein, Ragheb added, “Erdogan explicitly declared that the demarcation of the border between Egypt and Greece disturbed him, and this means that any alliance in the region by the countries of the eastern Mediterranean will be an obstacle to achieving his ambitions in the region.”

On Aug. 6, Shoukry and his Greek counterpart Nikos Dendias signed an agreement in Cairo to demarcate the maritime borders between the two countries in the eastern Mediterranean. In a statement Sept. 18, Erdogan said that “the Athens-Cairo agreement bothered us in Ankara, and Egypt should reconsider if it wants another agreement with us.”

Meanwhile, Mohammed Ezz al-Arab, head of the Arab and Regional Studies Unit at Al-Ahram Center for Political and Strategic Studies, told Al-Monitor that one of the organization's basic tasks is to dot the I’s and cross the T's in defining the maritime lines for each country, in accordance with international law, and thus based on each country's share of the gas wealth.

He added that this organization is a clear message to Ankara that its attempts at calm will not succeed unless it retreats from its ambitions in the region.

Ezz al-Arab expects Turkey to carry on with its policies without any change, despite the risks threatening it with the launch of this organization, due to Ankara’s severe energy poverty.