Egypt and Turkey's energy face-off in the Mediterranean

Egypt signing an agreement with five major energy companies to start drilling in the Mediterranean off its coast near Libya raises the prospect of more friction developing with Turkey. 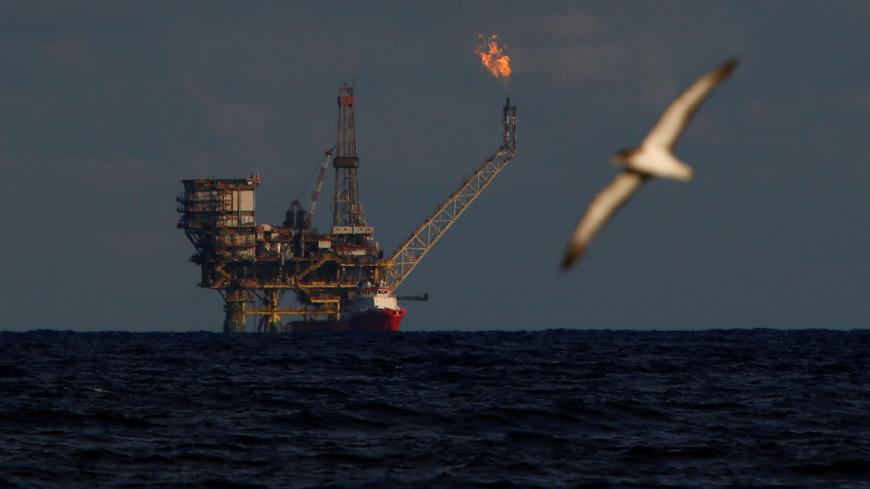 A seagull flies in front of a drilling platform at the Bouri oilfield, off the coast of Libya, Oct. 5, 2017. - REUTERS/Darrin Zammit Lupi

The US Geological Survey estimates there to be 122 trillion cubic feet of recoverable gas reserves in the Mediterranean's Leviathan Basin, and the countries in the region are on a quest to acquire what they consider their rightful share.

The competition over gas resources expanded in mid-February when Egyptian announced an agreement with US-based Chevron and ExxonMobil, France's Total, BP of Britain, and Royal Dutch Shell to explore for gas off its northwestern coast near Libya. Cairo expects exploratory drilling to begin early next year. The agreement intensified tensions with Turkey, which in November signed controversial maritime and military memoranda of understanding with Libya's UN-recognized Government of National Accord (GNA) in Tripoli.

Ibrahim Zahran, a petroleum expert and former chairman of the Khalda Petroleum Co., told Al-Monitor that Egypt has substantial quantities of gas and oil, but to thoroughly benefit from them, it must overcome problems of resource mismanagement. The country relies heavily on foreign companies to extract the lion’s share of its gas and oil, and in the absence of a demand for social responsibility, Zahran believes the benefits flow more to them than to Egypt. Zahran also said Egypt's energy wealth is subject to all forms of corruption or ill-conceived practices.

Turkey constitutes an important transit point for oil and gas exports bound for Europe from Russian and the Caspian Sea countries, but lacks it own petroleum reserves, Zahran noted. Turkey has to import about 75% of its energy needs, mainly from Russia, Iraq and Iran.

Meanwhile, in 2019 Egypt announced that it had become self-sufficient in natural gas and was exporting surplus electricity. Its petroleum trade balance achieved a surplus of $9 million during 2018-19. These figures include the earnings share of foreign partners, which means that Egypt's real petroleum trade balance runs a deficit.

According to Zahran, Turkey would like to achieve self-sufficiency in energy because of its industrial production, making eastern Mediterranean gas a top priority for Ankara. On the one hand, this desire reflects Ankara’s economic needs, but on the other, Turkey links access to Mediterranean fields to maintaining its regional status and the belief that it has a right to the region’s wealth. Turkey condemned the agreements Egypt reached with the five foreign oil companies in February, accusing Cairo of putting Turkey in direct competition with foreign entities seeking to boost their role in the vital gas region.

Previously, tempers had flared when Egypt excluded Turkey from a series of meetings it convened in 2018 that led to the establishment in January 2019 of the East Mediterranean Gas Forum — consisting of Greece, Cyprus, Jordan, Italy, Israel and the Palestinian Authority (PA) — an alliance of natural gas-producing countries for around the Mediterranean for cooperation on energy exploitation in the eastern Mediterranean basin. Another of its goals is to establish a partnership with the European Union in the energy sector. According to Egyptian Petroleum Minister Tarek el-Mulla, the forum will boost Egypt’s position as a regional hub. Turkey's exclusion from the forum may have contributed to spurring Ankara to move to strengthen its stance in the region.

Turkey cemented its relations with the GNA in December of last year by extending military support to it after signing a memorandum of understanding the preceding month on security cooperation along with a maritime demarcation agreement. Egypt, Cyprus and Greece have rejected the validity of the agreements, because they redraw maritime borders and would allow Turkey to drill for energy resources in areas of the Mediterranean recognized as belonging to Cyprus and Greece. Of note, Turkey has not signed the 1982 UN Convention on the Law of the Sea (1982).

Greek Foreign Minister Nikos Dendias noted that the maritime agreement is geographically absurd as it ignores the presence of Crete between the Turkish and Libyan coasts and clearly violates international law. Egyptian also denounced the deals, with the Foreign Ministry calling them “null and void.” It added that the contracts violate the Skhirat Agreement, which established the GNA and prohibits the government from signing international agreements without parliamentary approval.

Wael Rabih, a consultant at the Center for Strategic Studies at the Nasser Military Academy, told Al-Monitor that Ankara's stance is legally weak. Turkey's and its conduct encroaches on Egyptian interests.

Hussein Suleiman, an economic researcher at Al-Ahram Center and editor in chief of the magazine Turkey Affairs, told Al-Monitor by phone that Turkey's stance stems from its chronic energy deficit. Continuing to import 75% of its energy is too costly given its deteriorating economy, so it is seeking to tap into local energy sources.

Ayman Abdul Wahab, deputy director of Al-Ahram Center for Political and Strategic Studies, said Egypt opposes Turkey's strategy, because Cairo intends to become a regional energy hub for natural gas trade and exports, taking advantage of the Eastern Mediterranean reserves. According to Abdul Wahab, Egypt is focusing on the gas issue since it plans to build power grids for supplying neighboring countries in Africa, Asia and Europe and to establish new energy-based industries in the Suez Gulf.