Why Assad is scaling down military readiness across Syria

Due to the military budget deficit and in a bid to absorb the anger of loyalists and army soldiers, the Syrian regime decided to scale down the readiness of its army and armed forces. 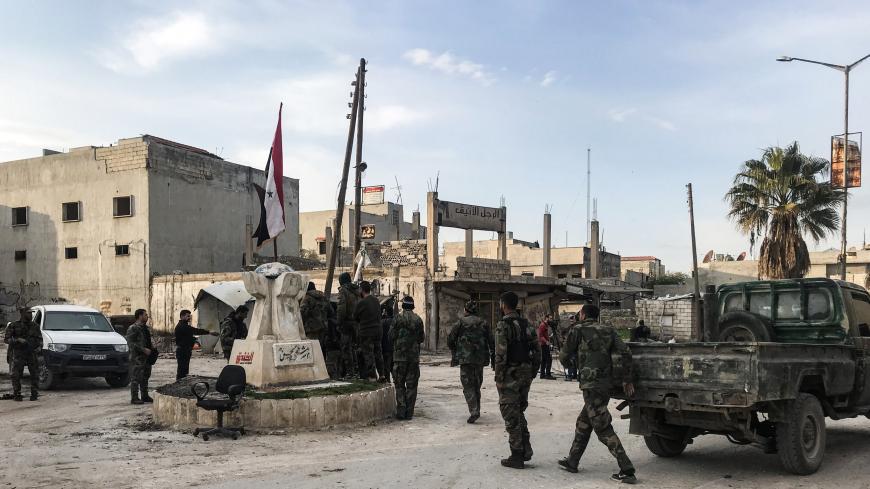 Syrian army soldiers gather with vehicles in a square in Saraqib in northwestern Idlib province on March 6, 2020, as government forces assumed control over the locality.

ALEPPO, Syria — The Syrian regime's decision to reduce the readiness of its army and armed forces has raised a panoply of questions related to the motivation and timing behind the decision on the military and economic conditions in Syria and raised the question as to whether the regime is seeking to convey specific messages to parties influencing Syrian affairs.

On Jan. 10, Syrian President Bashar al-Assad issued a circular ordering a rollback of army mobilization to regular level, meaning the level maintained nine years ago before the start of the conflict.

According to the Enab Baladi opposition website, the decision stipulated “scaling down the combat readiness of the Syrian military departments by the order of 66% to 33% for administrative departments, 80% to 50% for military units affiliated thereto and 100% to 80% for ground forces and the navy. In hospitals, however, readiness was maintained at 80%.”

Mohammed Adeeb, a political science researcher who lives in the countryside of Aleppo, told Al-Monitor, “To maintain the same level of combat readiness, the regime requires a continued flow of support and funding. The regime has been garnering support from Iran ever since it joined its ally, the Assad regime, in the war against the Syrian revolution. However, it seems that Iranian funding for the regime’s army has stopped due to the economic conditions and international sanctions imposed on the Iranian regime.”

Adeeb said the regime, through its decision to reduce the combat readiness of its forces, "is seeking to calm the anger of its Syrian supporters who started to long for their sons recruited in the army. The decision has been seemingly taken to allow soldiers and officers to visit their families.”

Ahmad Hasan Abdel Qader, a political activist based in the countryside of Aleppo, told Al-Monitor, “The decision to reduce the readiness of the regime army was [seemingly] based on a Russian order, as Russia wants to convey a message to the influential countries in Syrian affairs that the war has ended. Also, the regime is preparing itself for the upcoming phase, and the decision comes in the framework of Russian efforts to entrench Assad's rule and preserve his regime.”

Hisham Eskif, deputy head of the political bureau of the opposition Al-Salam Brigade, told Al-Monitor, “The direct reason behind the Syrian regime’s decision to scale down the readiness of its forces is its inability to bear the high costs that the permanent state of alert requires due to the deteriorating economic situation in Syria. Consequently, we might witness a rollback in the financial allocations to the army, meaning a reduction in food, fuel and other daily expenses.”

The brigade is affiliated with the Free Syrian Army (FSA). Eskif said, “The decision will not have a noticeable effect on the Idlib fronts in northwestern Syria, for example, because it does not apply to the militias supported by Russia nor the militias supported by Iran, and we have thus far not monitored any significant changes in the military situation of the regime forces in Idlib and its surroundings.”

Abdulslam Abdulrzak, a researcher in military affairs living in Idlib, told Al-Monitor, “The decision to scale down the readiness of the regime’s army is a pro-forma decision that will remain ineffective. It is merely intended to convey messages to the allied forces, primarily Iran, in order for them to resume their financial and military support for the regime’s army in the fight against the Islamic State [IS] in the Syrian desert, which is a vital land route for the Iranian forces and their affiliated militias to reach their areas of influence. The timing of the decision was not coincidental but coincided with the battles taking place in the desert. It is as if Assad wants to tell the Iranians, ‘If you want us to seriously participate in fighting IS in the desert, then you should continue to support us.’”

Abdulrzak said, “The readiness of the regime’s army will not be affected by the de-escalation, as it can mobilize its forces in record time in case there is a need to involve the forces in a battle against the FSA or the Syrian Democratic Forces [SDF].”

Younes al-Karim, an economic researcher and analyst who lives in France, told Al-Monitor, “The decision that Assad made to scale down the readiness of his army seems to be inevitable in light of the large deficit in the army’s budget, as Assad’s soldiers do not have enough food in their military barracks, and the state of resentment in the ranks of the army is increasing by day. The Assad regime is trying, through this decision, to absorb the anger of its soldiers.”

Karim added, “Through its messages to the three influential countries in Syrian affairs, the regime is trying to get them to sympathize with it to mitigate the effects of the Caesar Act, and is preparing itself for the presidential elections scheduled for mid-2021.

The Syrian regime never takes its decisions randomly. It rather plans them and tries to achieve the largest possible gains out of them both at the internal and external levels.

Mahmood Talha, a journalist who works with the opposition’s Thiqa News Agency, told Al-Monitor, “The military readiness rollback decision will seemingly lead to cooling off the fighting fronts and strengthening the state of de-escalation in northwestern and northeastern Syria, meaning with the FSA and the SDF. The Syrians who live in areas outside the control of the regime will be prompted to call on the local forces in control to improve their living and security conditions because the regime army no longer poses a threat on the battle fronts, and the time is ripe to claim the basics that people need. This will leave the FSA and the SDF in a predicament as they do not have organized institutions capable of carrying out the required duties toward the millions of Syrians living in areas under their control, and this would serve the Assad regime in the lead up to the upcoming presidential elections.”