Russia declares its support for the Orthodox Christian militias fighting alongside the Syrian regime, as it shows great interest in the ideological factor within its expansion and domination strategy in Syria 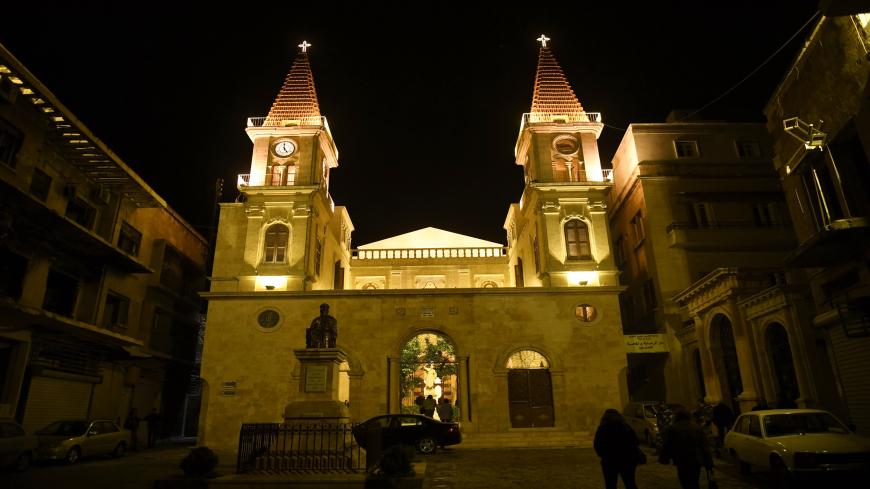 ALEPPO, Syria — The Russian forces operating in Syria honored Feb. 9 two commanders of the National Defense Forces, affiliated with the Syrian regime forces, in the cities of Mahrada and Suqaylabiyah in Hama countryside, and awarded them the Medal of Fidelity to Russia.

The honoring statement, which was published on Facebook by the National Defense Forces in Suqaylabiyah, stated  that due to the successful implementation of special missions and a personal contribution to strengthening combat cooperation, the commander of the Russian ground forces, Gen. Dimitri Glushenkov, awarded the Second Class Loyalty Medal to Russia to the commander of the National Defense Forces in Suqaylabiyah, Nabel al-Abdulla.

The ceremony came after the priest of the Russian Khmeimim military base in Latakia visited Suqaylabiyah Feb. 5 and inspected the construction works at the Hagia Sophia Church, whose foundation stone was laid on Sept. 5, 2020. The priest was received by Abdulla.

On Jan. 28, Wakil and Abdulla participated in the inauguration of a monument commemorating Prince Alexander Nevsky during their visit to the Khmeimim base.

Russian army leaders have repeatedly visited the cities of Mahrada and Suqaylabiyah to hold meetings with the commanders of the National Defense Forces in the two cities and take part in official events. On Oct. 19, 2019, Abdulla visited Moscow to participate in the Fifth World Christian Conference in Russia.

Wakil, who is close to Russia, is from the predominantly Christian city of Mahrada. He established National Defense Forces groups there in 2013 to fight alongside the regime forces against the Free Syrian Army (FSA).

He also received the Russian Peace Medal on Jan. 17 and the Kremlin Medal on Oct. 21, 2020, as his fighters participated in the battles of the northern and western countryside of Hama and Idlib.

Abdulla also enjoys strong ties with the Russian forces, as he leads an entire militia of Christian fighters. He also participated in the fighting alongside the regime against the FSA, and he enjoys wide popularity in Suqaylabiyah.

On July 26, 2020, Abdullah suggested the idea to build a replica of the Hagia Sophia in Syria during a meeting with a delegation from the Reconciliation Center at the Russian Khmeimim base.

According to RIA Novosti news agency, Vitaly Milonov, deputy of the Russian State Duma, said on July 17, 2020, “Orthodox Christians in Russia can help Syria build a replica of the Saint Sophia Cathedral in Suqaylabiyah.”

Abdullah’s decision to build the church came in response to Turkey, which had converted back then the Hagia Sophia in Istanbul into a mosque, 86 years after it was converted into a museum.

The Russian interest in the two Christian areas in the countryside of Hama and the armed militias raises several questions on whether Russia seeks to build ideological alliances in Syria as it did in Iran. Besides the Russian active role in the Syrian economic and military sectors, it seems the ideological factor supports the Russian efforts to expand and stay for a longer time in Syria.

Ahmed Muhammad Hamadeh, a researcher and military analyst, told Al-Monitor, “Russia is trying to garner further support for its policy in Syria, and is supporting military organizations from an ideological standpoint. This explains the religious card and the efforts to build the Hagia Sophia Church with the support and blessing of the Russians. The Russians are insinuating that their battle alongside the Assad regime is sacred.”

Military analyst and expert Abdulslam Abdulrzak told Al-Monitor, “Russia is trying to portray itself as the protector of Christians in Syria, as it seeks to win the allegiance of these [Christian] militias to have a strong position in the heart of Syria.”

Mohamad Bukaie, a political science lecturer at opposition universities in the countryside of Aleppo, told Al-Monitor, “Russia is showing a remarkable interest in the Christian regions of Mahrada and Suqaylabiyah, and this is a continuation of the Western tradition in general, and the Russian tradition in particular, with regard to minorities in general and Christians in particular. This takes us back to the Kuchuk Kainarji Treaty of 1774, which Russia signed with the Ottoman Caliphate to have the right to sponsor the Orthodox Christian population living in the Ottoman countries.”

Bukaie said, “Russia is aware that its ambition for a long-term presence in Syria requires the presence of favorable social environments. It also knows full well that Russia and Iran are competing over the Alawite component, but the Christian component is almost incontrovertible, as it is much closer to Russia. This is why it is important for Russia to portray itself as the protector of Christians — be it in Syria or Russia or before the West.”

Political science researcher Bilal Sattouf, who lives in Azaz in the countryside of Aleppo, told Al-Monitor, “The ideological factor is part of the Russian strategy and is exemplified by the support of the Orthodox Church and the armed Orthodox militias, as evidenced by the intensive visits and the building of a miniature version of the Hagia Sophia Church in Suqaylabiyah.”

This Russian trend can be explained based on two factors, the first one being related to the competition with the Iranian Shiite ideology in Syria, the religious factor being a top factor used to extend influence, and the second is related to breathing new life into the Russian role as a protector of the Eastern Orthodox Christians