The Gulf reconciliation has sparked controversy in the opposition circles of northwestern Syria over its expected positive effects on the Syrian revolution and opposition. 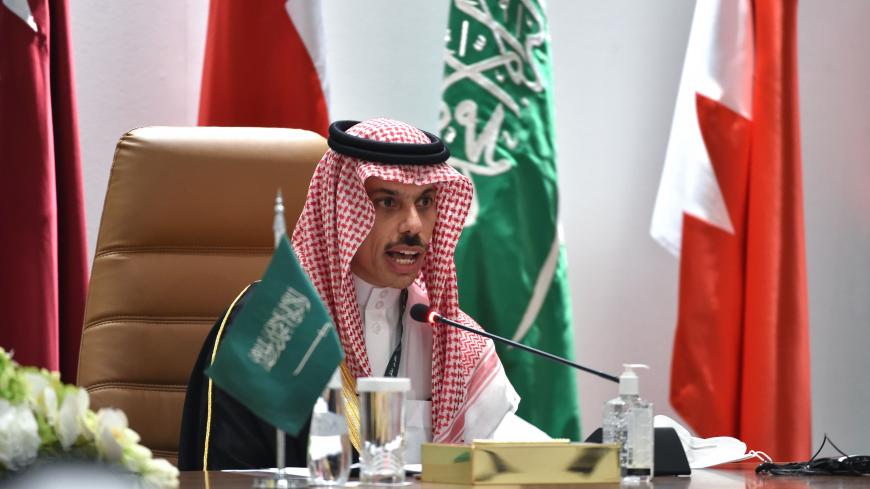 ALEPPO, Syria — On the wall of a destroyed building in the countryside of Idlib, in northwest Syria, which is under the control of the Syrian opposition, Syrian artist Aziz Asmar painted a Saudi and Qatari shaking hands.

At the top of the painting, Asmar wrote in English, “The blood can never become water.”

Asmar’s painting reflects the Syrian opposition’s interest in the reconciliation that took place Jan. 5 during the Gulf Cooperation Council (GCC) summit held in the Saudi city of Al-Ula.

Next to the hands, the painting depicts an octopus with the head of Iranian Supreme Leader Ayatollah Ali Khamenei with lava and fire spewing from his mouth. This aims to highlight the fact that the Gulf reconciliation disturbs Iran, which the Syrian opposition considers an essential partner in the Syrian regime’s war against the revolution.

With the start of the Syrian revolution in 2011, Saudi Arabia, the United Arab Emirates (UAE), Bahrain and Qatar had a somewhat unified position on the Syrian regime, as the four countries played a major role in placing pressure on the regime and shut down their embassies in Damascus in 2012 due to the use of force against civilians, the bloodshed and suppression of the peaceful movement.

However, the position on the Syrian regime started to shift in the wake of the Gulf rift after Saudi Arabia, the UAE and Bahrain, along with Egypt, severed relations with Qatar in 2017.

In late December 2018, the UAE and Bahrain reopened their embassies in Syria, and Abu Dhabi’s Crown Prince Mohammed bin Zayed Al Nahyan called Syrian President Bashar al-Assad on March 27, 2020, to express the UAE support for Syria and its citizens.

The supposed changes were by no means in the interest of the Syrian opposition, and their effects have been felt over the past 3½ years of the Gulf dispute.

The closing statement of the Jan. 5 GCC summit stressed the need to reach a political solution in Syria based on the first Geneva Convention principles and United Nations Security Council Resolution No. 2254.

The Syrian popular circles in the opposition-controlled areas are divided over the effects of the Gulf reconciliation on the Syrian revolution. One group believes that such a reconciliation would positively affect their situation in the small area that remains under their control in northwestern Syria, and would help the Syrian political and humanitarian affairs at several levels.

Meanwhile, another group downplays the importance of reconciliation and finds that such changes would have negligible effects, be they negative or positive.

Maged Abdel Nour, a journalist who lives in Idlib countryside, told Al-Monitor that he was very happy with the Gulf reconciliation, and he hoped that the reconciled countries would return to supporting the Syrian cause and unifying positions in the face of the Assad regime’s negative impact on the situation in Syria.

“Besides the UAE, the position of the Gulf states has not significantly changed with regard to the Syrian issue, as the Kingdom of Saudi Arabia maintained its position on the Syrian regime and is still supportive of the opposition. But the Gulf crisis has weakened the general position and distracted these countries from supporting the Syrian revolution,” Abdel Nour said.

Abdulslam Abdulrzak, a researcher and military analyst who lives in Idlib, told Al-Monitor, “Reconciliation sets the stage for the return of a joint Gulf action toward the Syrian issue, but this does not infer a convergence of views at all levels.”

“We hope to witness unified Gulf efforts against Iran and its arms in the region. If this is achieved, we, as a Syrian opposition, would be among the beneficiaries of such a unity because a great deal of the Syrian suffering emanates from Iran and its supporting militias, which have been fighting for years alongside the Assad regime,” he said.

Bilal Sattouf, a political activist from the northern countryside of Aleppo, told Al-Monitor, “Some tend to blow the Gulf reconciliation impact on the Syrian revolution out of proportion, as they believe that this reconciliation will take us back to the early years of the revolution and that most of the Arab Gulf states will revert to providing support to the revolution forces.”

He added, “I believe that this reconciliation will not have the imagined positive effect on the opposition, especially at the field level, because there are major powers controlling Syria. Also, the role of the Gulf states in the Syrian revolution has receded, as these countries lost their effectiveness and ability to bring about any change. What’s more, the dominant powers have concluded field agreements on the ground in Syria with the aim of stabilizing the status quo. I do not think that this will allow the Gulf states to support the revolution like before. Therefore I do not think that the Gulf reconciliation will positively affect the field situation within the opposition-controlled areas."

Mahmoud Talha, a journalist from the countryside of Aleppo, told Al-Monitor, “The Gulf crisis had disastrous repercussions on the Syrian opposition and the revolution, which caused the suspension of a great deal of military support and funding. Consequently, the political position of the opposition was affected due to the Gulf rift. In other words, the restoration of relations between Qatar and the other Gulf states will inevitably benefit the opposition and weaken its enemies, most notably Iran and its affiliated militias."

Mohamad Rashid, a journalist from the northwestern countryside of Hama, told Al-Monitor, “I think that the Gulf support for the Syrian revolution and opposition will return, but it will be different. This time around, the Gulf states will not provide weapons and money to the Free Syrian Army fighters to fight battles against the Assad regime. They will politically support the opposition and help it obtain political gains that would enable it to reach a solution that meets its demands. We may also witness Gulf support for the opposition at the service and developmental level, so that the opposition-controlled areas in northwestern Syria benefit from reconciliation between the countries supporting the revolution, especially given these areas’ utmost need for projects in productive sectors.”

Rashid concluded, “It is safe to say that the Gulf would not be sufficient by itself to change the course of the political and military confrontation with the Assad regime. And to determine the effectiveness of such Gulf support, the United States would urgently need to play a more effective role in supporting the Syrian revolution and opposition.”